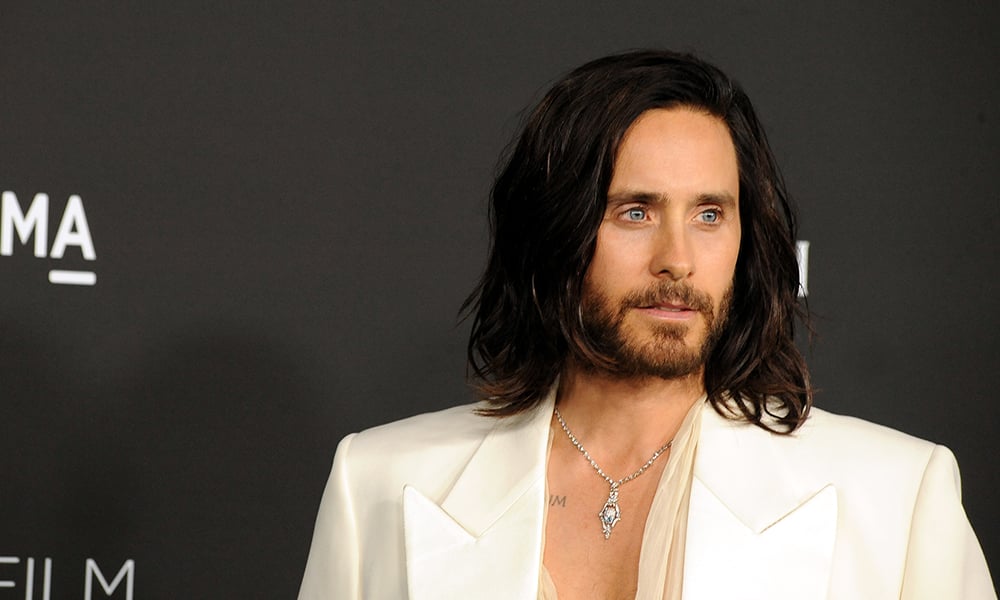 Is Jared Leto Gay, Bi, or Queer? Everything You Need To Know

Ever since Jared Leto’s portrayal of trans woman Rayon in the 2013 film Dallas Buyers Club, the actor/musician’s sexuality has been the subject of much speculation. Here, we take a look at his career and try to unpack the rumors surrounding Jared Leto’s sexuality.

Who Is Jared Leto?

Jared Leto is an American actor and musician born in Bossier City, Louisiana. His family moved around a lot growing up, owing to his grandfather’s career in the Air Force. His mother also joined a hippie commune at one point, which led to Leto’s interest in all things creative.

After several supporting actor roles in films like How to Make an American Quilt and Switchback, he got his breakout role in the 1997 biopic Prefontaine, in which he portrayed Olympic long-distance runner Steve Prefontaine. He continued to work in hit films like Girl, Interrupted, Fight Club, and American Psycho, all while recording music and touring with his band Thirty Seconds to Mars, which he formed with his brother Shannon.

Leto is known for his method-acting, which he often takes to extremes. For his role as John Lennon’s assassin Mark David Chapman in the 2007 film Chapter 27, Leto reportedly gained so much weight that he developed gout and had to use a wheelchair to get around. While filming for the 2016 film Suicide Squad, in which he played the Joker, Leto reportedly sent strange gifts to his cast members, including beads, condoms, and even a dead rat.

For his role as Rayon, Leto waxed his whole body, shaved his eyebrows, lost 30 pounds, and refused to break character while filming. Speaking of his experience working with Leto on Dallas Buyers Club, the late director Jean-Marc Vallée said he only met “the real Jared” months after filming wrapped up.

“The first time I ever even Skyped with Jared he was already wearing a dress and a wig, putting on lipstick and hitting on me,” said Vallée. “He then arrived on the set wearing a wig and a dress, and he always talked like a girl, exactly like Rayon.”

Leto’s latest role is Dr. Michael Morbius in the 2022 Marvel/Sony superhero film Morbius. The film was a box office and critical failure.

Jared Leto first sparked gay rumors when he made an offhand comment during a 2006 interview with America Online. He claimed he was “gay as a goose” – leaving the reporter speechless.

When asked to confirm the statement, Leto said that he was “like Morrissey”, The Smiths frontman who was often vague about his sexuality. Following the buzz generated by the interview, Leto’s publicist released a statement saying that “Jared was kidding.”

In a 2014 interview with his brother Shannon for FourTwoNine magazine, however, Leto said that he didn’t mind being called “queer”. It should be noted that this admission was prompted by a question by interviewer Kevin Sessums, who asked Leto if he and his brother are averse to being called queer in the same way that his straight friends “have begun to define themselves as queer without it being a sexual term but a cultural one”.

“I wouldn’t care,” Shannon answered, while Jared said, “I don’t think we care at all. We certainly identify with people who are different.”

Indeed, outside of his acting and music career, Leto is known for his fashion on and off the red carpet. He’s a frequent collaborator of Gucci creative director Alessandro Michele. The designer is credited for designing Leto’s now famous 2020 Met Gala look. The actor walked the pink carpet in a long turtleneck dress draped in a string of diamonds, holding a lifelike model of his own head.

At the 2022 Met Gala, Leto showed up in another Michele creation, this time matching exactly what the designer wore – a cream-colored tuxedo embroidered in glittery flowers, a red satin bow tie, leather gloves, and long, luscious locks flowing freely.

However, despite what some may try to deduce from this, his flair for gender non-conforming fashion and creative pursuits shouldn’t really be viewed as an indication that he’s gay or bi. Sexual orientation, gender identity, and expression are all independent aspects of one’s identity, after all. There are tons of straight, cisgender actors and public figures who play around with clothing.

When Leto won Best Supporting Actor at the Golden Globes for his portrayal of Rayon, it reignited long-standing arguments. Discussions surrounding the negative effects of having cisgender straight actors take queer roles.

“No matter what Dallas Buyers Club does as a film, the narrative around this movie, the fact that a man in drag is playing a trans woman, perpetuates the stereotype that we are men in drag,” Jos Truitt wrote for Feministing.

“Rewarding a man for his brave portrayal of an ‘impossible’ trans woman perpetuates stereotypes about us being men in drag, which also supports a culture of dehumanization and violence.”

Leto’s acceptance speech was also heavily criticized for its lack of recognition for the PLHIV who inspired the story. Leto was also criticized for poking fun at the physical transformation he made to embody the role. This is a reality that transgender people must face every day.

“I’d like to use this opportunity to clear up a few things. I did not ever use any prosthetics in this film. That tiny little Brazilian bubble butt was all mine,” Leto joked.

“One of the things I did was wax my entire body, including my eyebrows. I’m just fortunate that it wasn’t a period piece, so I didn’t have to do full Brazilian. Ladies, you know what I’m talking about, and so do some of you men, I think.”

Despite the criticism, in August 2020, Leto announced that he would be playing Andy Warhol in a yet-to-be-released biopic.

“Yes it’s true I will be playing Andy Warhol in an upcoming film. And so grateful and excited about the opportunity. Happy belated birthday Andy. We miss you and your genius,” Leto wrote in an Instagram post.

Jared Leto joked about being gay in the past and said that he doesn’t mind being called “queer” too. But he’s never really publicly come out as gay or bi. So, for now, the question of Leto’s sexuality is still up in the air.