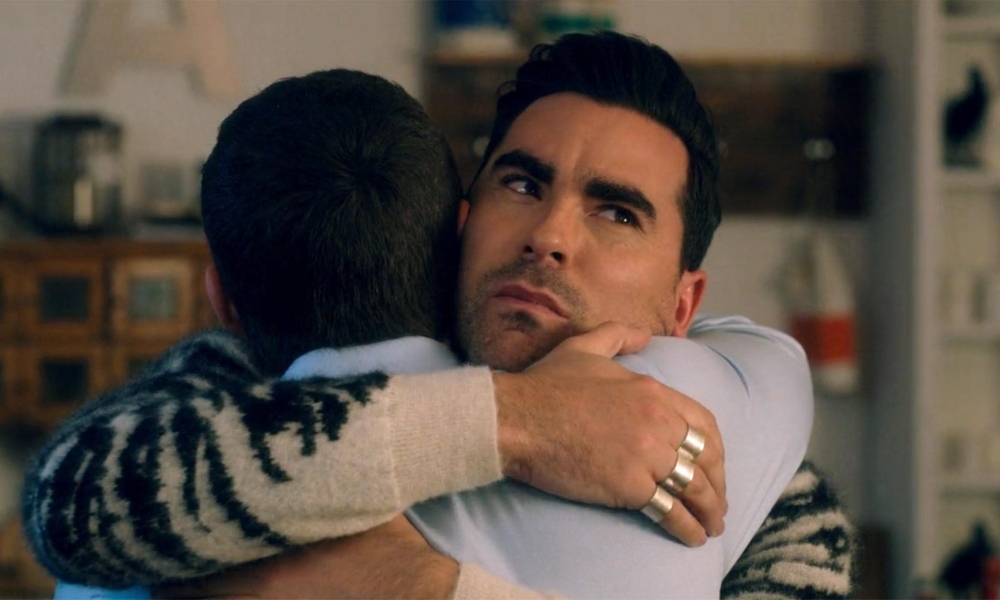 Dan Levy is best known for his role as the pansexual David Rose in the hit TV show Schitt’s Creek, which he also co-created with his father, comedian Eugene Levy. His performance – and his oft-quoted pansexual wine analogy – is so good that it has led fans to wonder, “Is Dan Levy gay in real life?”

Here, we answer all your burning questions about Dan Levy. Is he gay, pansexual like David, or in a relationship? Read on to find out.

Who Is Dan Levy?

Dan Levy is a Canadian writer, actor, director, producer, and co-creator of the award-winning TV series Schitt’s Creek. For his work on the final season, Levy also became the first person to win a Primetime Emmy in all four major disciplines – acting, writing, producing, and directing – in a single year.

On Schitt’s Creek, Levy plays the spoiled but lovable David, a former rich kid who is forced to live in a run-down motel with his family after his parents’ business manager scams them and leaves them with nothing to their name but the titular town.

During his stay in Schitt’s Creek, David meets and becomes best friends with the motel’s manager, Stevie, with whom he develops a short-lived sexual relationship. In one episode, David explains what pansexuality is to Stevie, using a now-famous wine analogy.

“I do drink red wine,” explains David, using wine to stand in for different genders. “But I also drink white wine. And I’ve been known to sample the occasional rosé. And a couple of summers back, I tried a Merlot that used to be a Chardonnay, which got a bit complicated… I like the wine and not the label. Does that make sense?”

Eventually, David falls in love with and marries Patrick, his business partner. The beautiful and hilarious wedding ceremony, which takes place on the show’s season finale, has been cited as one of the most powerful moments in queer television history.

Outside of Schitt’s Creek, Levy has also played John, the gay best friend to Kristen Stewart’s Abby, in the 2020 holiday rom-com Happiest Season. He also voiced a character on Q-Force, an adult animated series about LGBTQ super spies.

Given that Levy has enjoyed great success writing and portraying LGBTQ characters on film and TV, many fans have wondered whether Levy himself is part of the LGBTQ community.

In an episode of Watch What Happens Live With Andy Cohen, Levy revealed that he came out to his parents as gay at 18. His father, Eugene, who was also on the show along with the rest of the Schitt’s Creek cast, said that it was Dan’s mother, Deborah Divine, who asked Dan matter-of-factly, “OK, are you gay?”

“She did,” Dan responded. “My mom asked me over for lunch one day and I said, ‘Yes.’” He added that he and his mom are very close and that it felt like she already knew he was ready to come out.

Eugene also added that they already knew for a long time and were just waiting for the moment, but “mom couldn’t wait any longer.” Needless to say, Levy’s parents were both open and accepting of their son being gay.

Does Dan Levy Have A Boyfriend Or Girlfriend?

Levy is a pretty private person, especially regarding his personal life. In 2015, he told Out magazine that dating had taken a backseat to his career. “I’m single right now,” he said. “I’ve been single for a bit. It’s a strange thing. I don’t know whether it’s an excuse that I’m telling myself or whether it’s just what it is, but I feel like this job has consumed my life.”

“I hope that I can find someone when it’s all done or when things are a little bit more smooth,” he added. “But the eye has really been on making sure that the show is as good as it can be so that I can be employed for another year.”

He also expressed that he was open to entering a relationship in the future, saying, “When the time comes, and all the stars are aligned, someone else will come in, and hopefully, we’ll call it a day in the love life department.”

In 2020, he opened up again, this time to Bustle, sharing that he “would like to date more”.

What Is Dan Levy Up To Now?

Since Schitt’s Creek wrapped up, Levy has kept himself pretty busy. During the early months of the COVID-19 pandemic, he enrolled in a 12-week self-paced online open course on Indigenous Canada. He also hosted livestream discussions and interviews about the course and promoted them online.

In September 2021, Levy signed a deal with Netflix to produce and write film and television content. Most recently, Levy opened up briefly to Hollywood Reporter about writing a new rom-com for Netflix.

“What can I say about the movie? Well, it’s still in its early days. I’m an optimist, so I have high hopes,” Levy shared. “It’s still very much in development … It ended up having more to do with friendships in your 30s than actual romantic relationships. What would a love story look like if it was really about a group of friends in their mid-30s?”

So, Is Dan Levy Really Gay?

Yes. Not only has Levy written and played some iconic LGBTQ in recent years, but he also identifies as gay and has been out to his parents since he was 18. Fingers crossed that Levy continues to perform and write more LGBTQ stories for all of us to enjoy.