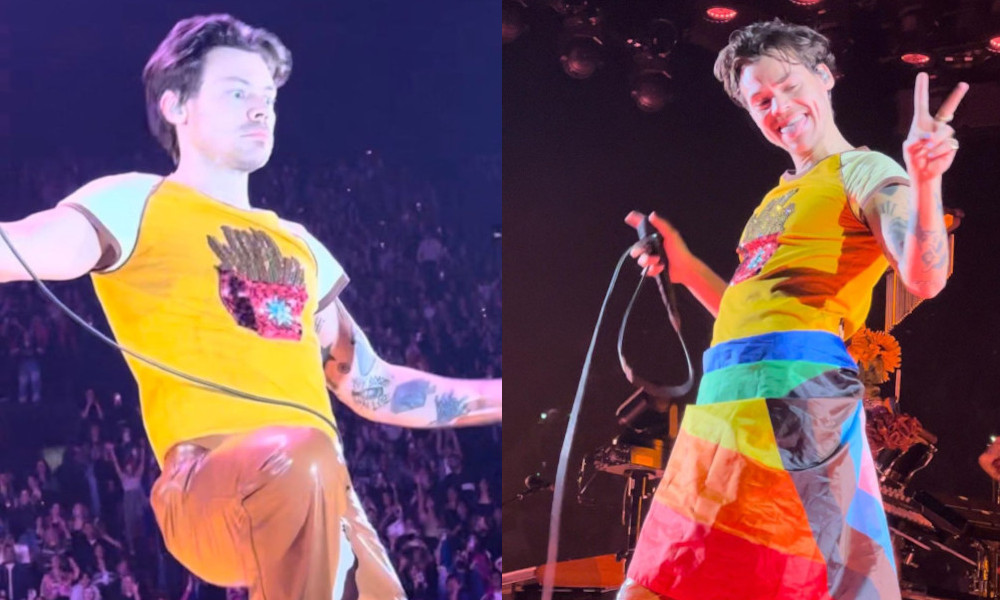 Harry Styles Rips Pants On Stage, Covers Himself with a Pride Flag

Harry Styles is rocking a Pride flag skirt on stage, but what is underneath has fans screaming.

The show must go on! Night one of Harry Style’s rescheduled Love on Tour residency at Los Angeles’ The Forum is a show no one will ever forget. Including Jennifer Anniston.

Not the Gucci Pants

Styles pranced around the stage singing and dancing to songs off his last three studio albums – especially his recent release, Harry’s House. But things took a turn when the upbeat sound of his hit single “Music For A Sushi Restaurant.” During the song, the pop star kneeled on stage to interact with his fans and entered into a deep lunge. At that moment, his brown leather trousers gave out, and his crotch was left exposed in front of his 17 thousand fans (and, as we mentioned before, Jennifer Anniston).

The actress attended Styles’ concert on Thursday night and had seats in the lower bowl. Eagle-eyed fans even caught sneaky photos of her enjoying the show. And what a show it was. We know Lenny Kravitz already did the whole splitting your pants during a live performance, but at least his first celebrity crush was not in attendance. In 2020, Styles told Ellen DeGeneres about his love for Anniston while in her hot seat. We will leave that knowledge there.

Pride Flag to the Rescue

Unfortunately (or fortunately, depending on how you look at it), Styles’ fans are always determined to capture every second of his performances on video. You never know when he will crack a joke or do an iconic note change. Needless to say, the moment his pants split open is all over the internet.

But Styles did not let any of this distract him from his craft. He quickly covered himself up with whatever he could find and continued singing. At first, he used a towel to cover up the wardrobe malfunction before tying a Pride flag around his waist. The “As It Was” singer is known for waving flags around on stage, so it is no surprise he had one easily available. And we love him for that.

“My trousers ripped. I feel I must apologise to a certain few of you right down in the front there. I mean, this is a family show,” Styles joked on stage. “You sir, are you OK? I promise it’s not part of the show.”

Styles will play two more shows in Los Angeles this weekend before going to Palm Springs for his birthday shows.

Harry Styles Rips Pants On Stage, Covers Himself with a Pride Flag