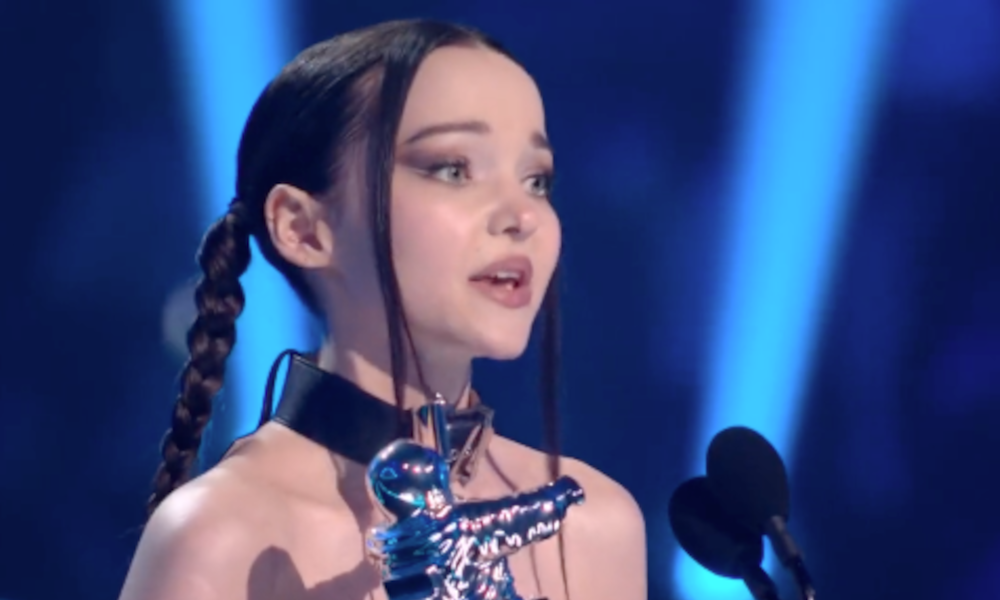 “This is so wild to be up here with so many artists that I worship, these are some of my all-time favorite artists up here,” Cameron said while accepting her Moon Person.

The 26-year-old star first rose to fame when she played twin sisters in the Disney Channel series, Liv & Maddie. She also made her musical debut on the series’ soundtrack before snagging roles in other musical projects like Disney’s Descendants films and NBC’s live television musical, Hairspray Live! Cameron released her first solo song in 2022, “Boyfriends.”

“I want to dedicate this to all the queer kids out there who don’t feel that they can take up space and inhabit the fullness of who they are,” Cameron continued in her speech. “Thank you for getting an overtly queer song onto mainstream radio.”

The flirty track first made waves on TikTok before hitting number 16 on the Billboard Hot 100. In it, Cameron sings about being a better boyfriend than the woman’s current partner.

“The lyrics sound casual, and they are not, is all I’m going to say,” Cameron told Out earlier this year. “But it’s not only a very specific recount of a night, it’s also just an amalgamation of growing up queer and the horrible, painful, longing for a girl who’s in a relationship or pining after or interested in a man, who can’t see the fullness and the magic of who this woman is.”

Dove Cameron came out as queer in 2020

Cameron first came out during an Instagram Live. In 2021, Cameron opened up about her identity to Gay Times.

“I was really nervous to come out and, one day, I dropped it because I was behaving like somebody who was out and I realized I wasn’t. When you are who you are, you assume people see that and then you realize, ‘No, I have to come out otherwise people aren’t gonna know.'”

Cameron was up against Baby Keem, Latto, K-Pop group SEVENTEEN, Måneskin, and “ABCDEFU” singer GAYLE for the new artist award.

“Thank you for supporting me as the person and the artist I am and I hope that in that way you’ve also given that same privilege to yourself,” she concluded.

Cameron’s latest single, Breakfast, was released last month alongside a powerful music video showcasing the overturn of Roe V. Wade and a world where gender roles are reversed.