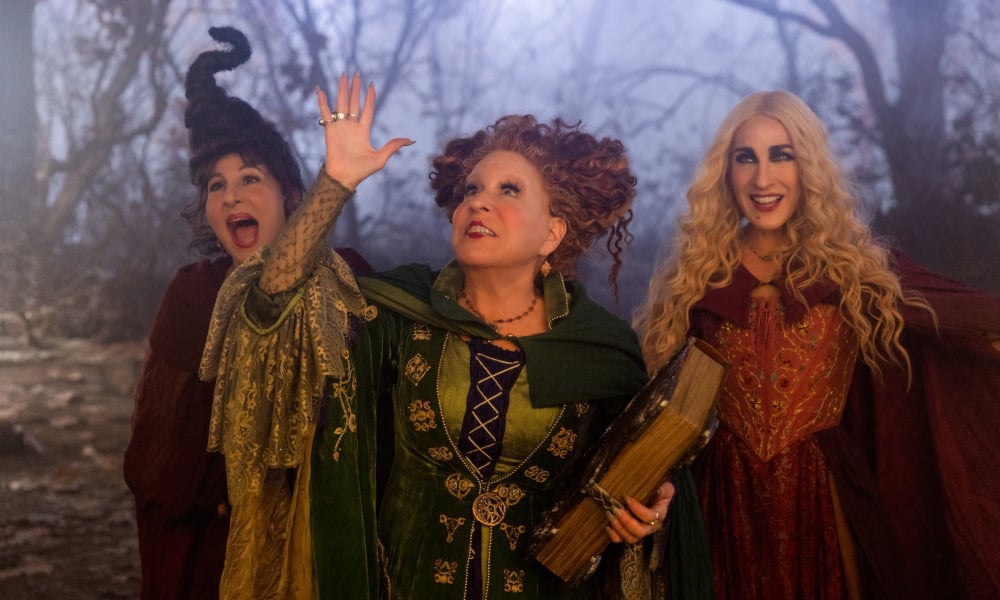 Is Disney Working On ‘Hocus Pocus 3’ With the Original Cast?

Rumors are swirling about whether or not the OG cast of Hocus Pocus will return for Hocus Pocus 3, a third and final installment to the franchise.

After Hocus Pocus 2 bewitched millions of viewers on opening night, many fans wonder if Disney will create one more movie to round out the trilogy. The second film was met with great success when it premiered on Disney+ in September, with all three iconic actresses returning to play the Sanderson Sisters. And Bette Midler, Sarah Jessica Parker, and Kathy Najimi said they wouldn’t have it any other way.

In an interview with Entertainment Weekly, Midler said the sequel was a dream come true.

“After 30 years with no sequel to Hocus Pocus, I’ve always been envious of people who get to do their favorite character more than once. The fact that we got to do this finally, after 30 years of promoting the idea, I’m glad we got to do it. I’d love to have a franchise — especially a character I love playing.”

And it’s a character we love seeing! Winnifred Sanderson and her sisters continued to carry a fanbase 30 years after the film’s release, even before fans started buzzing about a sequel. Then, in May of 2021, Disney officially announced that the Sanderson sisters would fly again.

The sequel mirrors the original plot, where the lighting of a Black Flame Candle resurrects the three witches and sees them running around modern-day Salem. But this time, modern-day looks a lot like selfies and the cosmetology section of Walgreens. Three teens (Whitney Peak, Belissa Escobedo, Lilia Buckingham) must work together to stop their mayhem and the deaths of all the children in town. Why is it always kids fighting these battles?

Hocus Pocus 2 quickly became the most-watched movie on Disney+. It also broke the Nielsen record for a streaming movie in its debut weekend with 2.7 billion minutes viewed.

Hocus Pocus Cast Says They Would Return For a Third Installment

Though the original witches were asked to return for the new movie, the remaining leading cast was not. The film’s producers decided to focus on a new storyline with the three teenagers rather than force cameos from the original group. But the cast is ready for a threequel.

“It’s such a fun story, and obviously having us reminisce about this makes it that much more fun and the fondness keeps growing,” Omri Katz told EW. Jason Marsden (Binx) and Vinessa Shaw (Allyson) also agreed that if the right opportunity came around, they would sign on.

No Hocus Pocus movie would be complete without Winnifred; luckily, Midler has expressed her desire for a third movie.

“If there was a third one, of course, I’d sign on, but I don’t know how. I can’t imagine what the story would be, but I love Winifred, Sarah, Mary, and our relationship. It’s good for women. We stick together through hell and high water, but we do cause mayhem, and not many women cause that much mayhem!”

Don’t worry. Katz already has the plot of the next film mapped out.

“Who’s to say there has to be continuity in terms of the story? You can create any story. If they were to take the book and turn it into a screenplay, it doesn’t have to be the witches coming back, they can just do whatever they want, and people will be stoked to see it regardless. The witches are 30 years older, so we’ve got to get this done sooner than later. We can’t wait another 30 years. Sorry, it’s the truth! I’m sure Bette does not want to be doing this at age 98.”

As fans catch wind of another installment, they have started theorizing what the story might entail. One Facebook page had the idea to introduce another villain outside of the Sanderson Sisters to cause mayhem in Salem.

“In a plot that would see Hannah Waddinghams mother witch causing chaos in Salem, the newly formed Coven of Becca, Izzy and Cassie would resurrect the 3 witches once more in hopes that they will help them defeat the evil Mother once and for all.”

This plot would merge the two casts from the movies and have everyone working together to restore peace. Potentially. It’s unclear how the Sandersons would really react to those circumstances.

Disney has not confirmed a Hocus Pocus 3 yet. But if you stuck around until the post-credit scene in number two, you know there is hope.

Hocus Pocus one and two are available to stream now on Disney+.

Is Disney Working On ‘Hocus Pocus 3’ With the Original Cast?