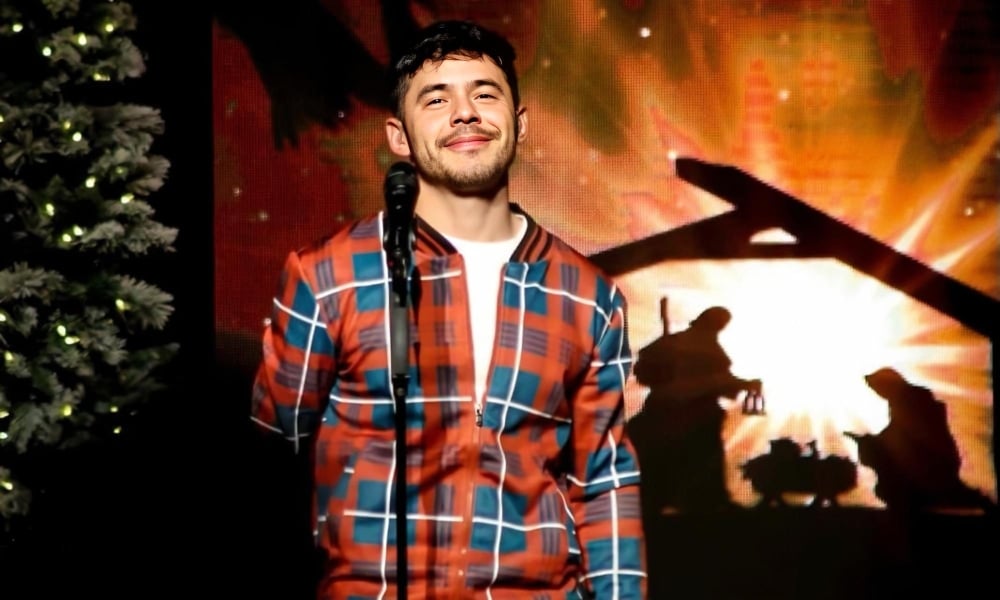 David Archuleta Slams Homophobic Fans Who Stormed Out of His Show

For many queer people, finding a balance between our faith and our sexuality is extremely difficult. Both are very real and important aspects of our identity, and finding them at odds can create so much inner turmoil. This is what David Archuleta has been reckoning with for some time now. When you experience emotions like this they often find their way to the surface, even if you don’t want them to. This is especially true for artists whose job is to wear their hearts on their sleeves. During a recent performance, David Archuleta poured his heart out on stage. Although most of David Archuleta’s fans showered him with support, a select few homophobic ones chose to leave. Thankfully, Archuleta says he will not be apologizing.

Who Is David Archuleta?

David Archuleta is an American pop singer best known for his appearance on American Idol. Archuleta is also known for being raised in The Church of Jesus Christ of Latter-day Saints. Informally known as the LDS or Mormon Church, followers of the church aren’t exactly known for their progressive views on LGBTQ+ issues. In 2008 the church came forward in favor of California’s Proposition 8, the anti-marriage equality bill. They also recently created (and later walked back) a policy that considered those in same-sex unions “apostates.” This meant that their children were barred from receiving blessings or being baptized in most circumstances.

“I’m trying everything I can to find a way to still belong here.”

The anti-LGBTQ+ sentiment within the church is well-documented, and openly pro-LGBTQ+ followers are few and far between. David Archuleta has been walking that difficult line since he came out in the summer of 2021. The singer, who uses the label queer, recently met with a leader of the church where he was told several times to “find a good girl.” In response, David told the leader that he is “trying everything [he] can to find a way to still belong here.”

“My church wasn’t outright aggressive towards gay people,” Archuleta told Good Morning America. “It’s a very passive-aggressive stern stance they have.” This journey meant David came close to marrying three different women and even considered taking his life. The church has a real incentive to keep Archuleta under its thumb, based on his popularity alone. As such they have made many attempts to convince him to stay. In the end, David Archuleta decided it was best to part ways rather than deal with more homophobic discourse.

Why Did People Walk Out of David Archuleta’s Show?

Archuleta recently performed in Delta, Utah as part of his The More the Merrier Christmas Tour. After an incredible and moving performance, the crowd cheered for an encore and Archuleta returned to pluck away at the piano and chat. It was then that he poured his heart out. A video recorded by a fan captures Archuleta’s shaky voice nervously telling people about his journey. For 18 minutes Archuleta opened up and shared a vulnerable moment with the people in the audience. Once he finished, Archuleta treated the audience to one more song.

How Do We Know People Walked Out?

It was a magical night, and Archuleta left his audience with one more song and a thoughtful message about self-acceptance. For the most part, the audience loved it and loved Archuleta more for it. Unfortunately, not everyone was so happy. Shortly after the performance, Archuleta’s management received an email from someone connected to the tour. The email complimented Archuleta on a beautiful performance but expressed their disappointment that he talked about “his journey to being queer.”

Yesterday, Archuleta revealed that someone connected with the tour (it’s unclear if it was someone connected with the venue, the booking agents, or promoters) emailed his manager to complain. They said people had walked out during the part when Archuleta was talking. “They got an incredible experience,” said the email. “But they did not pay for David to take [15 minutes] and ruin that Christmas experience they just had.” They went on to express their hope that Archuleta is not allowed to do that again.

How Did David Respond?

Archuleta posted the entire email, redacting any identifiable information, to Instagram and Facebook. There the singer expressed his own disappointment. “This tour hasn’t been the easiest for me to do,” said Archuleta. “A way for me to find peace with it is by being open about my journey.” The singer went on to explain that the person singing these songs is just as human as anyone else in the room. “I don’t think sharing my journey ruins any Christmas spirit,” said Archuleta. “Unless you allow your own misconceptions to ruin it yourself.”

“I will not apologize.”

Thankfully, Archuleta is not backing down. He maintains that he didn’t “say anything explicit or inappropriate.” He also repeated what his manager said in response to this email.  “I will not apologize for anything I say however imperfectly I express it. I am me.” We are so glad that David Archuleta is able to muster this kind of strength in the face of homophobic acts.

How Did His Fans React?

The response on social media has been mostly positive, although it has inspired some discourse about what fans are “owed” at concerts. Some commenters argued that concertgoers paid to hear music, and that’s it. Others say they paid to see David and we’re glad to hear him speak from his heart. Whatever you believe, there is no doubt that Archuleta’s words touched many hearts in that audience and will go on to effect change in many more.

At the time of publishing tickets for the remainder of David Archuleta’s tour are still available.

David Archuleta Slams Homophobic Fans Who Stormed Out of His Show