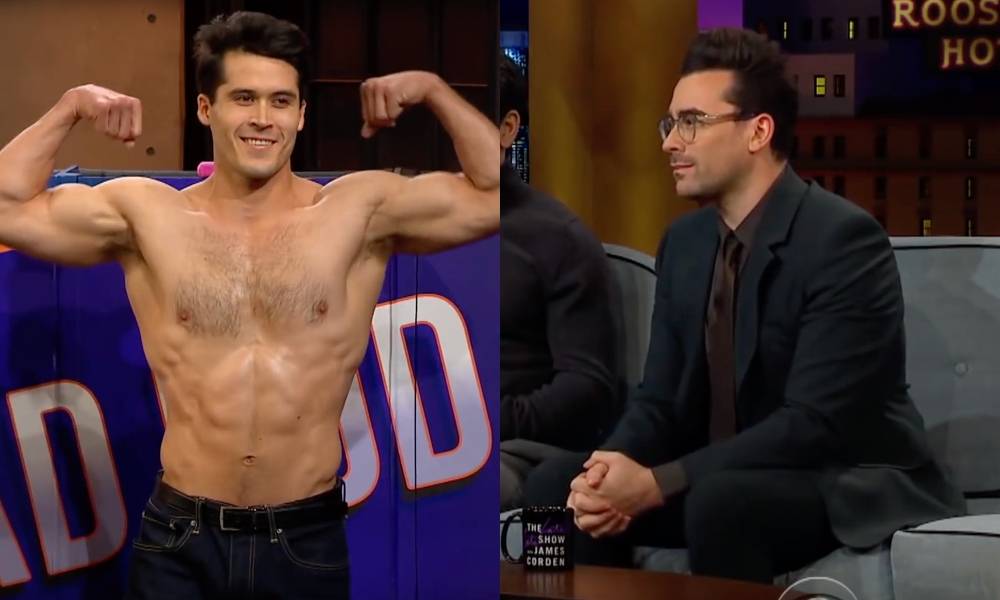 “I have to preface this by saying I think dad bods are rad bods.”

With the final season of Schitt’s Creek well underway, and the upcoming release of Marvel’s new superhero film The Eternals, it seems both Dan Levy and Kumail Nanjiani are having a bit of a moment. Both on the talk show circuit, they made quite the appearance on The Late, Late Show with James Corden.

In true James Corden form, they played a game called “Rad Bod or Dad Bod,” inspired by Nanjiani’s recent body transformation. The premise is simple. Can you tell what a guy’s body looks like from just his face? Six brave participants line up in cleverly fashioned boxes, only revealing the chin up, and stepping out once the players have cast their judgements. It’s a middle schooler’s nightmare!

Before the game kicks off Levy offered a well placed disclaimer, saying “I have to preface this by saying I think dad bods are rad bods.” Kumail agreed, following swiftly by saying “All bodies are beautiful,” with some approval from the audience.

There was a little bit of something for everyone in that lineup, with the lines between dad bod and rad bod blurring. Ultimately all of the guys were troopers, and this game played out a lot differently to how it would have on a late night show just 10 years ago.

After things cool off, the conversation turns to Levy and Nanjiani’s most recent projects. We start with Kumail’s latest project, Little America, an acclaimed anthology series where each episode follows the life of an immigrant in the United States. One such episode, called “The Son” has already been banned in 11 countries for i’s LGBTQ themes. The episode follows Rafiq (played by Haaz Sleiman), a closeted Syrian man who is outted to his family and forced to flee, ultimately arriving in America.

Related | Archie’s Abs Are the Most Important Character on Riverdale

We then move on to Levy, who is celebrating the last season of the much beloved Schitt’s Creek. Corden shows us photos of fans kissing under the series finale’s billboard which depicts Dan and his costar locking lips. A billboard that would have been unthinkable in the not so distant past.

We appreciate you Dan Levy.