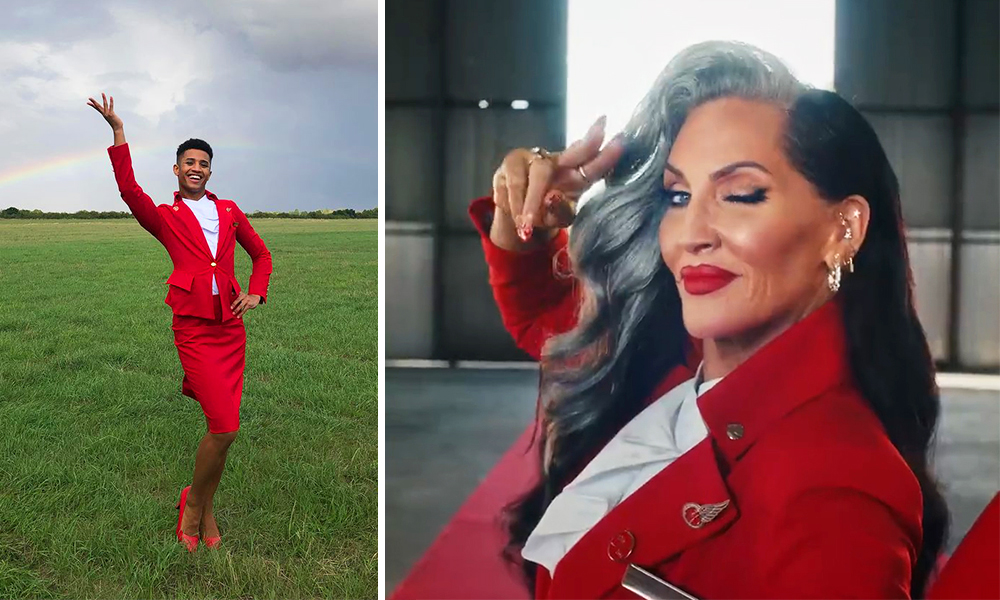 Virgin Atlantic made waves recently with a significant announcement. The airline announced it would no longer enforce gendered uniforms, and instead allow all pilots, staff, and cabin crew to choose the uniform they feel most comfortable in. Virgin Atlantic said they created this gender-inclusive policy to give staff the option to choose which of their iconic uniforms “best represents them.”

The announcement came with a short, stylish video highlighting the uniforms, designed by Vivienne Westwood. In the video, the models strut on a runway and in an airline hanger, vogueing and posing to the beat. They dress in either a red jacket and skirt combo, or a burgundy jacket and pants combo. You may also recognize some familiar faces in the video, including Michelle Visage from RuPaul’s Drag Race and Tyreece Nye, who is a TikTok favorite of ours.

We’ve changed our uniform code to give our crew, pilot and ground teams the option to choose which of our iconic uniforms, designed by Vivienne Westwood, best represents them 👠 #SeeTheWorldDifferently pic.twitter.com/dbCP4WxObl

Visage made an official press statement about the announcement, saying that wearing “what best represents them” can feel empowering. “This gender identity policy allows people to embrace who they are and bring their full selves to work,” she continued. Tyreece took to TikTok to show their support for this decision while strutting her stuff in her Vivienne Westwood elegance.

This is great news to be sure, especially in the wake of increased anti-trans sentiment and violence. However, to be LGBTQ+ online means immediately wincing when we hear good news in anticipation of the backlash. And sure enough, there was a backlash. It was one response, in particular, that gave us genuine pause.

I don’t think he’s ever been on a plane pic.twitter.com/zLI2rxyHIV

Paul Joseph Watson, British far-right conspiracy theorist, and radio host took to Twitter with a self-own so perfect, we couldn’t have made it up. In a now-deleted Tweet, the editor-at-large at Info Wars imagined a world where this change led to an updated bathroom policy. In an attempt at humor, he said that it was “pretty bigoted” for airlines to separate “male and female toilets.”

“I want to see the sh*t show of ‘gender neutral bathrooms’ unfold at 30,000 feet,” he continued. If you’re like basically everyone else on Twitter you’re thinking the same thing. Has Watson ever been on a plane before? Add this ridiculous and fallacious “slippery slope” argument to the conservative self-own pile.

Before we enjoy a selection of hilarious responses to this, let’s take a moment to celebrate this small victory. Despite the many leaps and bounds that still need to be made, this is a good thing. The joy that this change might bring to queer flight attendants and passengers is worth celebrating. The potential for queer folks to see someone celebrated for who they are publicly and professionally is worth celebrating. We take our wins where we can get them. Here’s to you Virgin Atlantic.

In the meantime, stick around for some of our favorite reactions to the Tweet that instantly backfired.

He says he’s against socialism, but he sure loves being publicly owned.

“excuse me, I have to go and use the ladies room.”

*clambers over three middle row passengers to get to the lady toilet side* pic.twitter.com/MQKo0R8DIm

I find it quite frustrating that people LOVE to complain about the idea of gender neutral bathrooms, yet they forget that at least once in their life they’ve use one (on a plane, on a train, at home). Seriously 🤦🏻‍♂️ Get your minds out of the gutter and let people go to the bathroom