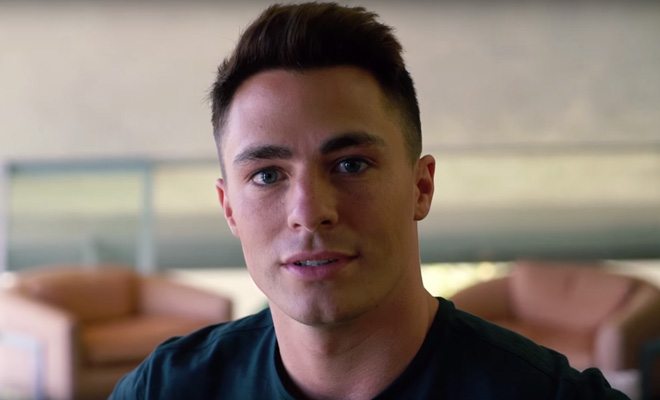 In the September issue of OUT magazine, Colton Haynes revealed the traumatic details of his coming out. “… My dad killed himself because he found out I was gay,” Haynes said. In addition to Haynes’ striking cover, his interview with OUT is by far the most honest and open interview of his career. The 28-year-old former Teen Wolf star described his childhood as “chaotic,” and that in Andale, Kansas, “you just couldn’t be gay.”

My September issue of @outmagazine 🙂 ? x @blairgetzmezibov . Hair by @angeloevans , styling by @grantwoolhead / story by @rkurtosenlund . Never thought this day would happen and am currently in tears (y'all know I get emotional haha). So happy

According to OUT, “At home, Haynes’s mom, Dana, was both blindsided and dismayed by her son’s announcement. His response was to rebel. A year of exploration—in which he lost his virginity to both sexes—also became one rife with drug experimentation. He ran away from home for three weeks and bunked in a friend’s closet. He was there when an estranged relative called to tell him that his father, William, had committed suicide by swallowing roughly 40 oxycodone pills.”

When asked about his father’s tragic death, Haynes opened up and said “I’m the last person in the world who would say, ‘Oh, my dad—pity me,’” he said. “But I was told that my dad killed himself because he found out I was gay. So, of course, I lost it and was like, ‘How could you say something like that?’ And no one will ever really know the truth. But my brother and my mom went to pick up my dad’s stuff, and the only picture on his fridge was my eighth-grade graduation picture. So I was just like, F—k.”

Haynes also provided insight to his altercation with Noah Galvin. He said, “When I came out, Noah tweeted, ‘Welcome to the family,’ and ‘So proud of you.’” Haynes added, “I have the tweets saved on my phone. Then, all of a sudden, I’m the worst, I’m a terrible person, and I’m a shame to the gay community. I think just having enough nerve and guts to come out in any way is a lot. It was really an emotional thing for me. And for that to be discredited by someone who has never met me was upsetting. He has no idea what I’ve been through. And I can’t sit here and have a conversation about Noah because I don’t know him either.”

You can read the entire interview on OUT.com. But before you do, watch the video below for a behind-the-scenes look at Haynes cover shoot for the September issue.