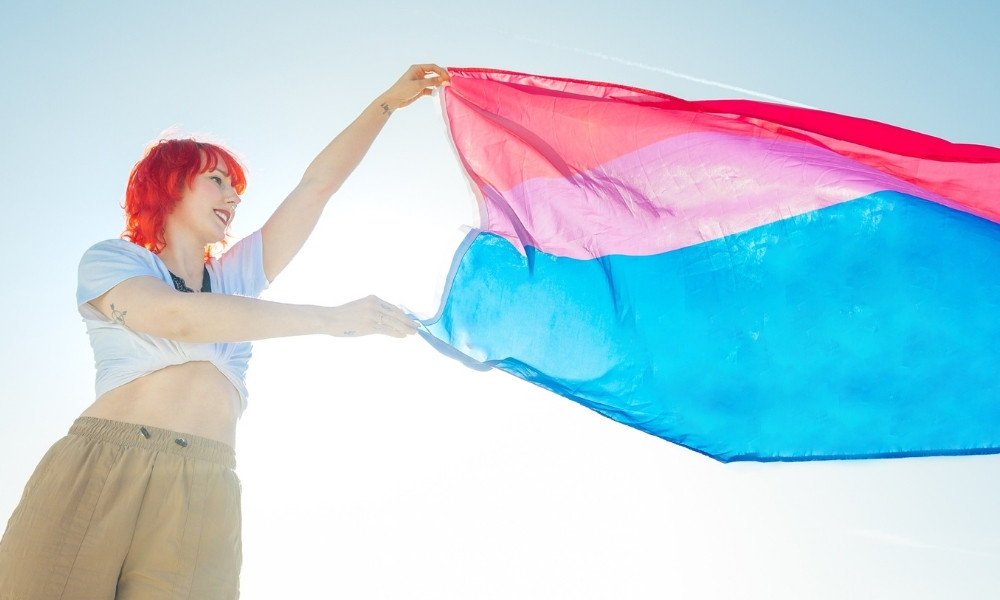 Bi Erasure: Why So Many Bisexual People Feel Invisible

Bi erasure and biphobia: Why is it so common, and how can we fight it?

More and more people are becoming comfortable identifying as bi. A new poll found that 3.1% of US adults, 5.1% of millennials, and a staggering 11.5% of Gen Z adults identify as bisexual. Another study found that bisexuals make up a majority of the LGBTQ+ population. We’re also seeing better bisexual representation in films and TV, with fully fleshed out and well-rounded characters — examples of inclusive characters like Detective Rosa Diaz of Brooklyn Nine-Nine and Darryl Whitefeather of Crazy Ex-Girlfriend.

Still, bisexual people face more mental health challenges than heterosexuals, lesbians, and gay men. This — among other things — can be attributed to the continued invalidation and erasure of bisexuals. And not just in mainstream media but also within the LGBTQ+ community.

While those “bi now, gay later” jokes may seem harmless, they can take a huge toll on their sense of self-worth to a lot of bi people. After all, it’s not fun feeling like most people don’t believe in the legitimacy of your sexual orientation.

So let’s talk about bisexual erasure and its harmful effects on bisexuals, along with the myths, misconceptions, and outdated bi stereotypes that continue to add fuel to the fire. We also offer some valuable tips for countering bi-erasure and biphobia.

What Is Bi Erasure?

GLAAD defines bi-erasure or bisexual invisibility as a “pervasive problem in which the existence or legitimacy of bisexuality is questioned or denied outright.” And perpetrators of biphobia are not limited to straight folks either. Gay and lesbian individuals can also invalidate bisexuals, often excluding them from the queer community for not being “queer enough.”

Bi invisibility is not a new concept in the same way homophobia has been around for ages. But while the two are similar, bisexual erasure and biphobia are a little more complicated because the invalidation comes from all sides.

One theory why this happens is that bisexuality challenges the traditional understanding of sexuality as this rigid, unchangeable thing. Most people still believe that if you’re not straight, you’re gay, and that’s that. When Dr. Alfred Kinsey proposed the Kinsey Scale, which challenged the popular notion of sexuality as black or white, people all but lost their minds.

According to Dr. Lauren Beach, a core faculty member at Northwestern University’s Institute for Sexual and Gender Minority Health, bisexual erasure may very well stem from a “Westernized obsession with the binary.” For a lot of people, if sexuality isn’t binary, it forces them to confront the possibility that they may not be 100 percent straight or gay. And, as we all know, not everyone is ready for that conversation. 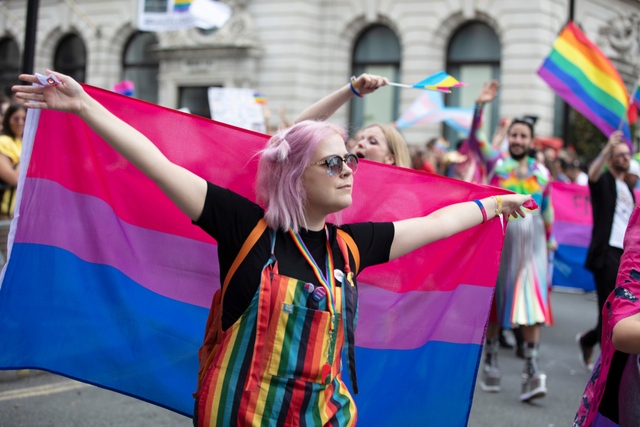 4 Myths And Misconceptions About Bisexuality

So what does bi invisibility look like? Today, there are still a lot of these pervasive myths that represent and contribute to bisexual erasure and bi invisibility. Here are four biphobic myths that, frankly, need to go:

Despite its commendable handling of Kurt Hummel’s journey to self-discovery and acceptance as a gay man, Glee missed the mark when it came to bisexuality. One of the most controversial and biphobic lines to come out of the show is, ironically, delivered by Kurt himself, who says, “Bisexual’s a term that gay guys in high school use when they wanna hold hands with girls and feel like a normal person for a change.” Ouch.

But this isn’t just a throwaway remark from a hurt teenager. It reflects a stereotype that many people continue to hold about bisexual men. A stereotype is not valid, as plenty of bisexual men loves both men and women.

Bisexual Individuals Stop Being Bi Once They Get Into A Relationship

Some people think that bisexuality is a transition phase between queerness and straightness. And that bisexuals are unable to decide on who they want to date. As such, many people assume once a bisexual does get into a relationship, it means that they’ve stopped being bisexual altogether. This happens to bisexuals who enter both same-sex relationships and heterosexual relationships. But that’s not how it works.

Beloved actor and famed bisexual person Evan Rachel Wood said it best: “Remember, bisexuality doesn’t mean halfway between gay or straight. It is its own identity.”

Unfortunately, this stereotype leads a lot of bisexuals, especially those who end up dating the opposite sex, to develop an internalized biphobia. They also carry a sense they aren’t “queer enough” to feel like they’re genuinely part of the LGBTQ+ community. That’s how damaging biphobia in the LGBT community can be. 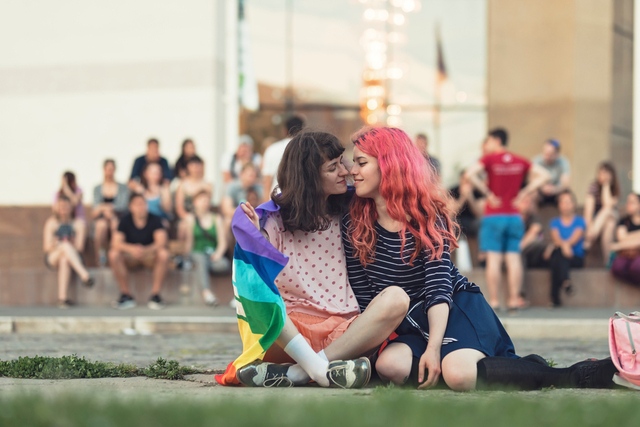 Bisexual People “Have It Easier” Than Gays And Lesbians

There is a dreadful myth that members of the LGBTQ+ community perpetuate that bisexuals, by being “straight passing,” have a kind of “bisexual privilege.” But ask any bisexual about feeling privileged, and they’ll tell you they think the exact opposite. Bisexuals tend to feel invisible.

Identifying as bi means dealing with invalidating statements, repeatedly coming out of the closet multiple times to different people, and defending the validity of your sexual orientation. As mentioned, bisexuals also face high rates of depression, anxiety, self-harm, and suicide – even higher than gay and lesbian people.

Bi erasure in media and bi invisibility in real life is like the chicken and egg situation. The media perpetuates myths about bisexual people, and the general public buys into it – reiterating those myths to their bisexual friends. It’s a vicious cycle that needs to stop.

Here are some of the worst examples of biphobia in films and TV:

There is a myth that bisexuals are greedy, indecisive, and could leave their partners out of a desire to be with everyone. This myth trickles down into the “evil bisexual” trope when villains are coded as bisexual to emphasize their duplicitous nature.

Some of the primary examples of the evil bisexual trope are Frank Underwood from House of Cards, Catherine Tramell from Basic Instinct, and T-Bag from Prison Break.

Again, this comes from the unfair myth that bisexuals “want it all.” While we’re seeing less of this these days, there was a time when a bisexual character was introduced; you could expect them to be depicted as some sex-crazed, hyper-sexual character.

While there is nothing wrong with promiscuity (and polyamory) – it’s 2021, slut-shaming is overrated – these have nothing to do with bisexuality. Some bisexuals are perfectly capable of maintaining monogamous relationships.

What do Marissa Cooper, Santana Lopez, and Willow Rosenberg have in common? They were all, at some point, seemingly temporarily bi. This trope stems from the notion that bisexuality is just “a phase.” And that bisexuals have yet to decide whether they want to be gay or straight. Unfortunately, all of these characters eventually stopped being bisexual, either “going back to being straight” like Marissa did on the second season of The OC or going full fay, like Willow from Buffy.

We also owe this trope to the fetishization of bisexual women. And how, once upon a time, producers would bait viewers into staying tuned to a show with the promise of a steamy kiss between two beautiful lesbian or bisexual women. Bisexuality was, unfortunately, seen as nothing more than a ratings grab.

Poor Marissa Cooper. Not only was she used as one-time bisexual ratings grab, but she also fell into the “Bury Your Gays” trope that affects so many bisexual characters on TV.

The “Bury Your Gays” trope describes the phenomenon of how, once a character comes out, openly expresses their queerness, or develops a semblance of a happy ending, they’re immediately killed off. After her one-off fling with a woman named Alex in season 2, Marissa’s storyline goes all over the place. Eventually, the storyline leads to her death in the season 3 finale.

Aside from Marissa, there is a long list of bisexual characters who’ve been killed off from their shows, from Game of Thrones star Oberyn Martell to Orphan Black’s Delphine to Skins’ Naomi.

How To Fight Back Against Bi Invisibility, Erasure, And Biphobia

So how can we change the narrative? For one, we must fight for better representation. Thankfully, we’re halfway there, with more accurate and less stereotypical portrayals of bisexuality on the big and small screen. We’re also seeing more and more bisexual celebrities coming out, from Halsey to Demi Lovato to Frank Ocean.

Aside from improving representation, it’s also essential to raise awareness about bisexual community organizations.  They work hard to promote bi visibility and provide resources and a sense of community to bisexual youth.

Finally, make sure not to perpetuate any of the abovementioned myths and misconceptions about bisexuality. Make it a point to emphasize that the bisexual identity is a real, valid identity. If someone says otherwise, be an ally and call them out.

Bi Erasure: Why So Many Bisexual People Feel Invisible