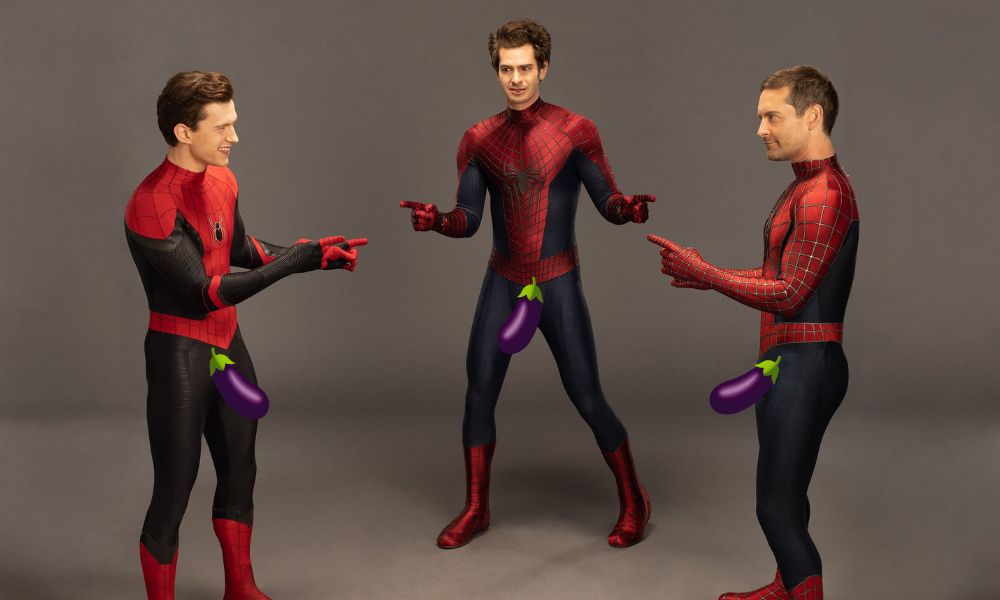 These Spider-Man spandex costumes are the gift that keeps giving. It has been more than three months since the release of Spider-Man: No Way Home and fans are still getting teased with behind-the-scenes shenanigans.

If you didn’t already know, which seems impossible, The Amazing Spider-Man star Andrew Garfield recently reprised his role as Peter Parker for the Spider-Man: No Way Home cross-over movie.

Since its release, Tom Holland and Garfield have been making their rounds promoting various projects. However, conversations keep coming back to the spidey suit.

First, Holland almost broke the internet and hearts worldwide when he confessed that one of the Spider-Men wore a fake butt to fill out their suit, which Garfield responded to during a red carpet interview.

Garfield upped the ante by revealing that the actors were all pre-occupied by each other bulges. They compared Spider-Man bulges while recreating the infamous Spider-Men pointing meme on their first day of filming No Way Home.

A post shared by Spider-Man: No Way Home (@spidermanmovie)

During a late-night appearance on Jimmy Kimmell Live to talk about his recent Oscar nomination for Tick, Tick… Boom, Garfield opened up about his experience shooting the viral moment.

He said, “We were all kind of thrown onto a set and told to point at each other,” Garfield continued. “I think we got one good shot, and that’s [the one released] because the rest of the time, we were just laughing, trying not to stare at each other’s crotches. Just comparing bulges.”

So, which Spider-Man showcased the biggest web-slinger? We may never know, but we bet some internet sleuth could figure it out with a strategic zoom.

Unfortunately, Spider-Man: No Way Home is unavailable to stream right now. However, you can purchase the movie on iTunes or Amazon Prime for $19.99 or rent it starting April 12.

You can watch the making of the famous meme below.