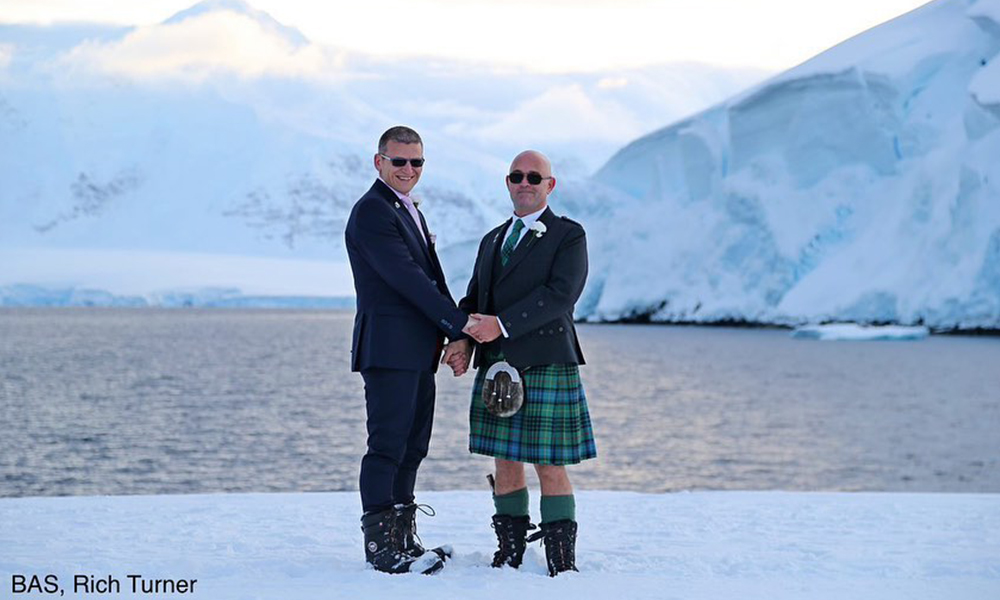 This Gay Couple Became the First To Get Married on Antarctica

A gay couple just made history.

Gay couple Eric Bourne and Stephen Carpenter got married in Antarctica, the final continent to see a same-sex wedding.

“Antarctica is such an incredible place,” Carpenter told Queerty. Carpenter and Bourne have been together for 20 years, but they waited to get married until they found the perfect spot to do so. “We’ve even had the coordinates of the wedding location engraved into our rings,” Carpenter shared.

“We’re both very proud to be the first same-sex marriage to happen in British Antarctic Territory,” Bourne added. Their wedding took place at the Rothera Research Station, meaning the marriage will be valid in the U.K.

Their crew members joined in on the celebration

Bourne and Carpenter are stewards on the polar research vessel, RRS Sir David Attenborough.  So, their crew joined in on the big day with their Capitan as the one who performed the ceremony in front of 30 crew members. The ship’s doctor even provided the music for the celebration afterward.

Related | Colton Underwood Wants Someone to Air His Wedding on TV

Bourne said they love that their crew got to be a part of the wedding, saying, “We feel very lucky to be able to live and work in such an incredible community and place together.” It’s clear their community loves them back, with Captain Will Whatley saying it was an honor to be a part of their wedding. “The RRS Sir David Attenborough is not only our place of work but also our home, and it is a privilege to help two integral members of our crew celebrate their special day,” Whatley added.

Congrats on your wedding Eric and Stephen!

This Gay Couple Became the First To Get Married on Antarctica