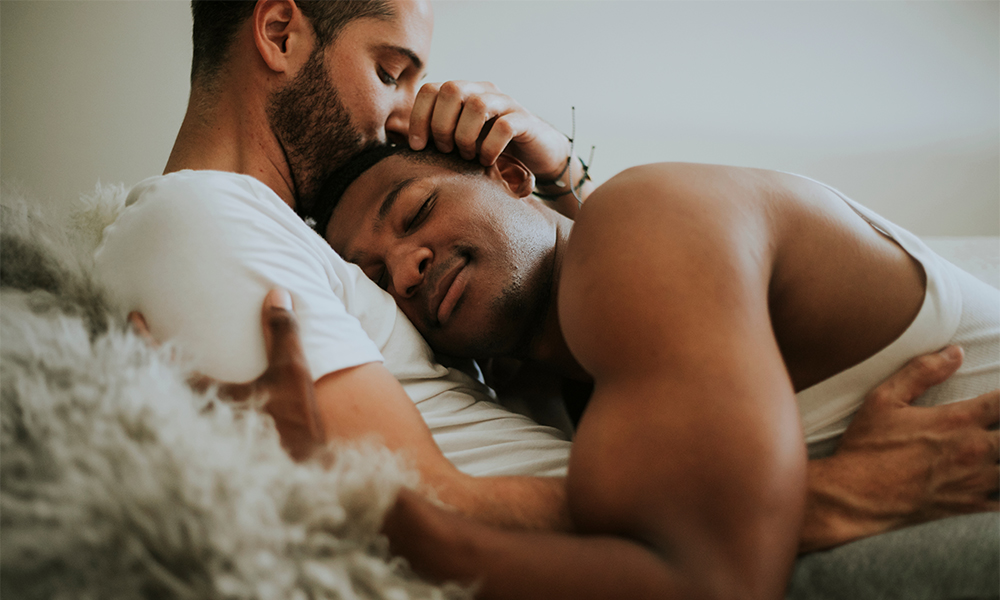 What are the best U.S. cities for same-sex couples?

Best is almost always a subjective term. Same-sex couples live in every state of this nation, and just like their heterosexual counterparts, they want different things out of where they live. Some queer couples want to live in the mountains, while some love the hustle and bustle of a major metropolitan area. But where do the most same-sex married couples in the United States live?

In the table below, we’ve ranked the best U.S. cities for same-sex couples by tabulating five categories: percentage of same-sex married couples among the general population, average household income, cost of living in comparison to the national average, walkability score, and average one-way commute in minutes.

As you can see, Seattle reigns supreme for LGBTQ couples, according to our research.

But again, queer people live and work, get married and date and stay single, quite literally everywhere. The gayest place in the United States? According to The New York Times, that honor goes to Washington, D.C., where 10 percent of the population identifies as LGBTQ. The video below shows a slice of this queer life in our nation’s capital.

Though Washington, D.C. didn’t make our list of the 10 best cities for same-sex married couples — largely because of the federal city’s high cost of living and long commute times — it is a fabulous place to live. Now let’s take a deeper look at our top 10 cities for LGBTQ couples across the United States.

In fact, one of the most crucial parts of queer history happened here, as you can see in the video below.

New York City is home to the Stonewall Inn, the place most historians point to as beginning the modern gay rights movement when a riot broke out there on June 28, 1969, between the queer community and the police. To commemorate this momentous event — an event we can clearly thinking of as leading to marriage equality today — Gay Pride is traditionally held in June every year.

One of the most racially and generally diverse cities in the United States, Miami is also one of the best places for same-sex couples to call home, as you can see in the video above. Want to know the racial breakdown of LGBT Americans? Check out the interactive graph below. 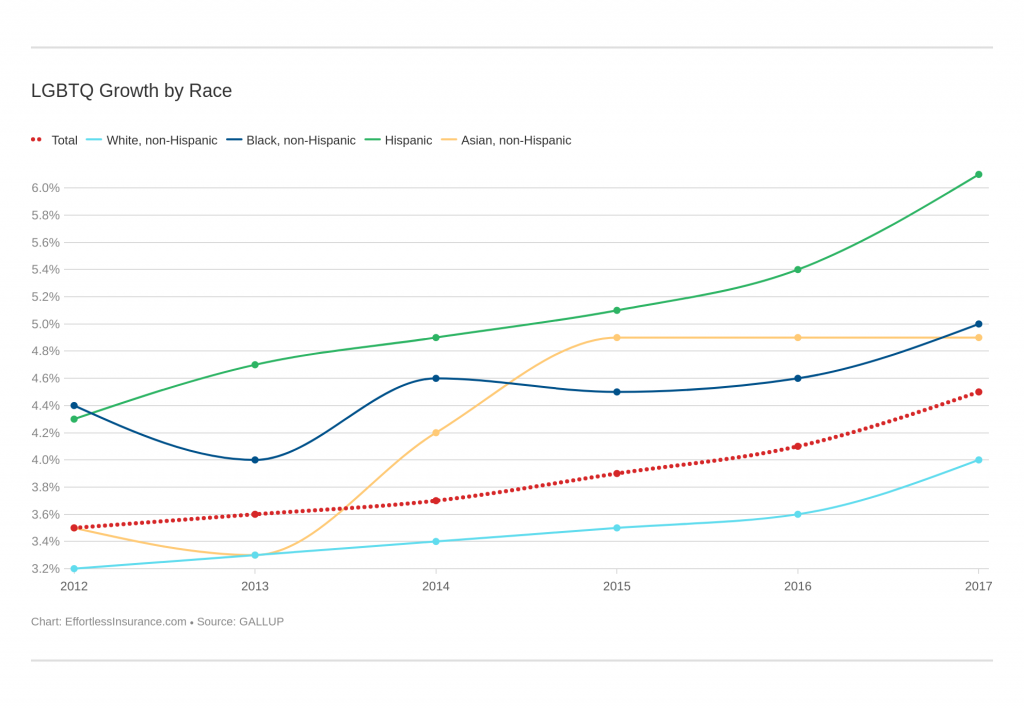 Florida as a whole has a high share of senior residents. We’ve gathered some tips on getting term life insurance over the age of 50 that are worth checking out for yourself or a loved one in this demographic.

Tied with Albuquerque for our number seven spot, San Diego, the City in Motion, has long been an LGBTQ mecca, especially for queer folks coming out of the armed forces. Also good to know: Several of HRC’s best places to work can be found in this SoCal gem, including Sony, Illumina, and Sempra Energy.

Though San Diego’s cost of living is well above the national average, that coastal life might be worth the cost. Just check out a fraction of what there is to do in the City in Motion in the video below.

Balboa Park is one of the most unique places in the United States. A 1,200-acre urban cultural park, Balboa houses the world-famous San Diego Zoo alongside museums and gorgeous open green spaces, not to mention some world-class architectural styles at every turn.

With so much outdoor beauty, San Diegans have a higher level of health than the national U.S. average. They also have a plethora of healthy eating options, which is good because eating healthy can lower your insurance rates and benefit your life overall.

Also known as The Q, Albuquerque, New Mexico, holds the distinction of being the only non-coastal city on this list.

It’s also the only city with a cost of living score well below the national average to make our top 10 list of the best U.S. cities for queer couples. For same-sex couples looking for affordability and wide-open vistas, the biggest city in New Mexico is certainly worth a second look.

Every October, hundreds of hot air balloons fill those wide-open skies at the Albuquerque International Balloon Fiesta. You can check out a glimpse of this unique event in the National Geographic video below.

The Albuquerque International Balloon Fiesta is the largest hot air balloon event in the world. It also has a huge impact on the New Mexican economy, bringing in around 1 million visitors each October to the state.

It’s probably no surprise to see the capital of the first state — Massachusetts — to legalize same-sex marriage on this list. With a high concentration of same-sex couples and so many places on the HRC’s “Best Places to Work” list, Boston is a great place to call home.

Add in world-class educational institutions and some of the best harbor views in the country, and we think one of our country’s oldest cities is also one of the best for LGBTQ folks. And it’s one of the most groundbreaking gay cities. Wicked Queer, one of the oldest LGBTQ film festivals in the world, is housed right in Boston each year.

Though the other Portland is the smallest city on our list — the only place with fewer than 100,000 residents, in fact — Portland, Maine, packs a lot of livability, especially for LGBTQ folks. The city is fairly walkable, affordable, commutable, and, given its position on a rocky bay of the North Atlantic, picturesque. As you can see in the video below, Portland is pretty great and, as you can see, friendly.

For those who need easy access to the busy Northeastern corridor, Portland, Maine can be a much more livable city than its larger neighbors like Boston or Providence. Though the cost of living is higher than the national average, it’s much lower in Portland than it is in most other places in New England.

Maine has a higher proportion of older residents than most states. Life insurance for seniors has some particular nuances that are worth checking out, especially if you or a loved one is over the age of 65.

Want to know the generations of U.S. residents who identify as LGBT? In the interactive graph below, we’re providing the generational cohort of LGBT Americans. 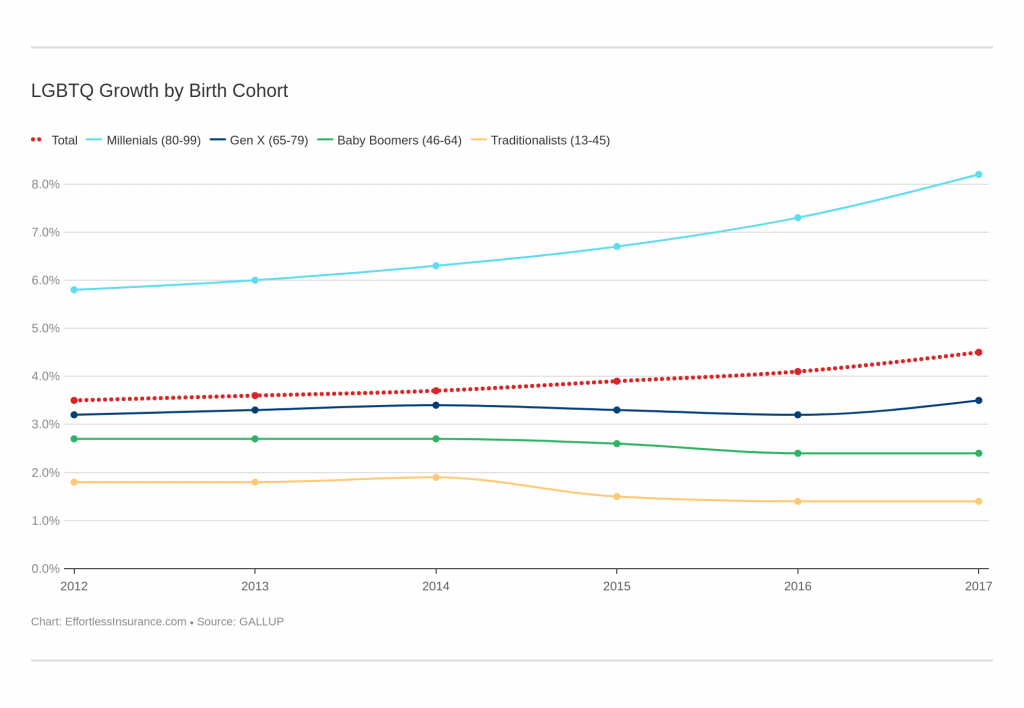 Millennials are much more likely to identify as LGBTQ than any other generation with data available. 8.2 percent of the cohort is queer, whereas the next most queer cohort, Generation X, has only 3.5 percent of its constituents identifying as such as of 2017.

Located in the heart of California’s wine country — Sonoma County — Santa Rosa is one of the smaller cities on our list. But that doesn’t mean it’s not a great place for same-sex couples to lay down roots.

The HRC ranks California as having some of the best and most comprehensive laws protecting LGBTQ folks in the country, meaning the diverse state is one of the best places to be a diverse person.

Additionally, Santa Rosa is an all-around great place to live. With a high ratio of restaurants, coffee shops, art galleries, and entertainment venues per capita, there’s never a loss of things to do … not to mention all that wine. And with San Francisco only 55 miles to the north, metropolitan queer life is only a short drive away.

Continuing the West Coast same-sex love, Portland, Oregon lands at the third spot in our list of the best places for LGBTQ couples.

Like its neighbors to the north and south, Seattle and San Francisco, Portland receives a “working toward innovative equality” ranking from the HRC, who also marks many Portland-based companies on their list of the best places for LGBTQ folks to work, including Adidas, Cambia Health Solutions, and Standard Insurance.

U.S. News & World Report ranks the City of Roses as one of the 10 best places to live in the United States overall.

San Francisco has long been known as a gay mecca, so it’s no surprise the City by the Bay received the second spot on this list of the best cities for same-sex married couples. According to wedding expert and manager Valeriya Istomina of Wedding Forward, San Francisco is a top place for queer couples. She explains that:

“San Francisco, including North Bay, is a top choice for same-sex couples. Same-sex couples choose to settle in this area more than any other place in the United States. LGBTQ+ culture is rich neighborhoods in San Francisco, New York, and Los Angeles, which all became a part of the burgeoning out-and-proud gay movement.”

Indeed, more same-sex married couples per capita live here than anywhere else, and the HRC includes many San Francisco and Bay Area companies in their “Best Places to Work 2020” list, such as Gap, Inc., Sephora, and Lyft. Though the cost of living is high in San Francisco, our research shows that the city has some of the happiest residents of any major metro area in the United States.

As you can see in the map below, San Francisco and nearby Santa Rosa have the highest per capita rates of same-sex marriage of any cities in the United States.

MSNBC named Seattle the most gay-friendly city in the United States “based on their legislative equality, strong LGBT presence, and safety of the community.”

The HRC ranks the state of Washington as “working towards innovative equality” in their 2019 scorecard, and according to the organization’s 2020 list “Best Places to Work” for LGBTQ folks, many Seattle companies receive top marks, including Starbucks, Amazon, and Zillow. U.S. News & World Report even named Seattle one of its top 10 places to live overall.