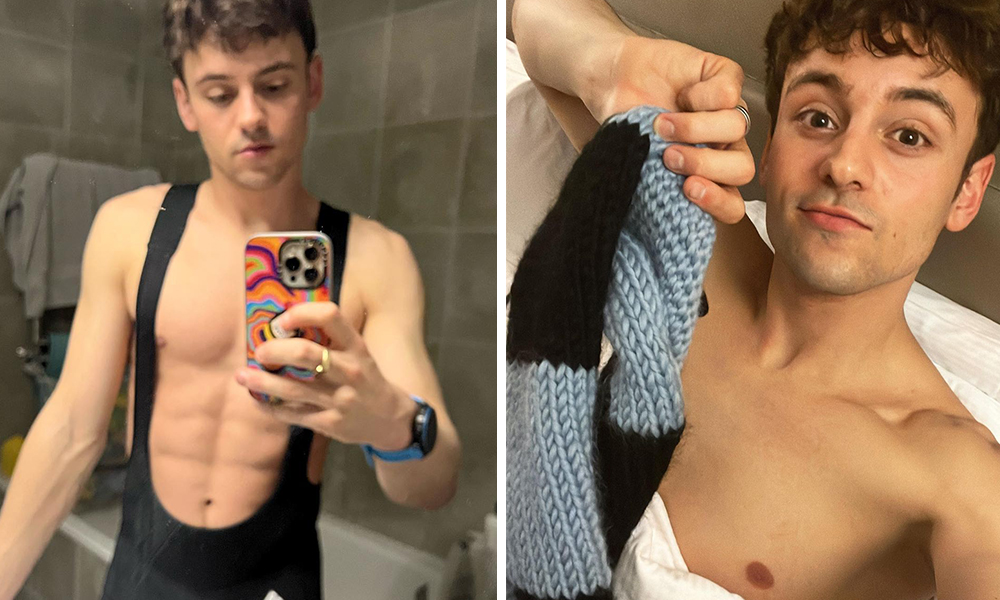 The Olympic athlete is on a “grueling four-day journey from London to Plymouth by foot, water, boat and bike,” in hopes of raising money for Comic Relief. That’s over 270 miles to cover in what’s fittingly called Hell of a Homecoming.

Both in preparation and throughout the process, Daley has documented it all on his Instagram. “Here are some pics of me getting used to cold water swimming!” Daley wrote. The first photo showed him covered head to toe in a wet suit, but his abs still poked through! He decided to strip down more in the second photo and show his muscular legs in a red speedo.

In his next Instagram update, Daley showed off his cycling outfit, which once again showed off his rock-hard abs! “I have been training both indoor and outdoor cycling to get the miles in! 😰,” he wrote. The last video in the post’s carousel caught fans’ attention. That’s because it’s a video of Daley practicing on a stationary bike while wearing a rather revealing leotard.

He then shared yet another impressive speedo mirror pic. “Indoor Swimming VS. Open Water Swimming… can you guess which one I prefer! 👀🥶 I have been acclimatising to the cold water slowly, but surely!”

The night before he began his journey, he shared a shirtless selfie all snuggled up in bed. “Tomorrow I start my Hell Of A Homecoming! Face mask, knit & Bed! I’m starting early, but if you’re around Tower Bridge at 9am, come say hi! ❤️,” he said.

Related | Tom Daley Will Satiate Your Thirst With These Steamy Selfies

Tom is currently on day two, swimming 1,000 meters (the length of 50 swimming pools) and then biking 63 miles. On Wednesday, he will bike 130 miles from Southampton to Bovey Castle, which holds a special place in his heart. It’s where he married his husband in 2017.

On Thursday, his final day, he will run 30 miles from Bovey Castle to his hometown of Plymouth.