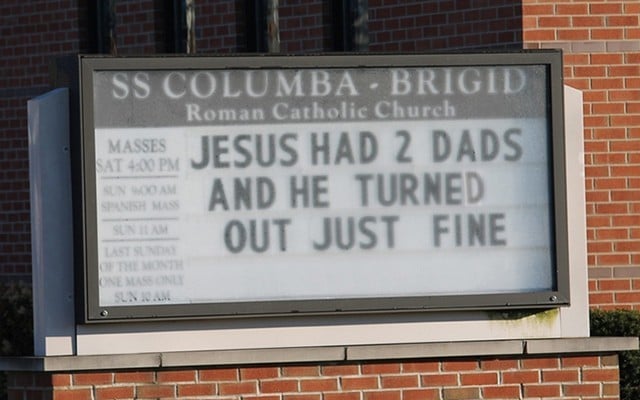 According to St. Columbia-Brigid Roman Catholic Church in Buffalo, New York “Jesus had two dads and he turned out just fine.”

While the implication of this expression is associated with homosexually, Reverend Roy T. Herberger, who posted the sign, says he didn’t mean it that way. So why would he post this message? Google told him to — duh.

Reverend Herberger said, “I just Googled ‘funny church signs.'” Apparently, he did this before Googling “Learn To Give a Sermon,” or “How Many Hail Mary’s….” We kid. But seriously, what was he expecting? Unbeknownst to the pastor, after posting the sign, parishioners and passersby were appalled and began posting photos to their social media in disgust. An expression encouraging acceptance? How dare they!

One man was so overcome with  outrage, he took to his blog on Catholic Family News to discuss. “The sign was so scandalous I had a hard time believing it was not photo-shopped. This morning I drove to the church to see for myself. With great sadness I report it is true.” he said.

As if this sign is really what’s wrong with the Catholic Church. Regardless, the Diocese of Buffalo stepped up to offer an explanation after phone calls flooded the office calling the signage “blasphemous” and “heretical.”

The administration released the following statement:

The sign has since been taken down. Hopefully this frees up the Diocese to focus on the accounts of pedophilia that plague the church.