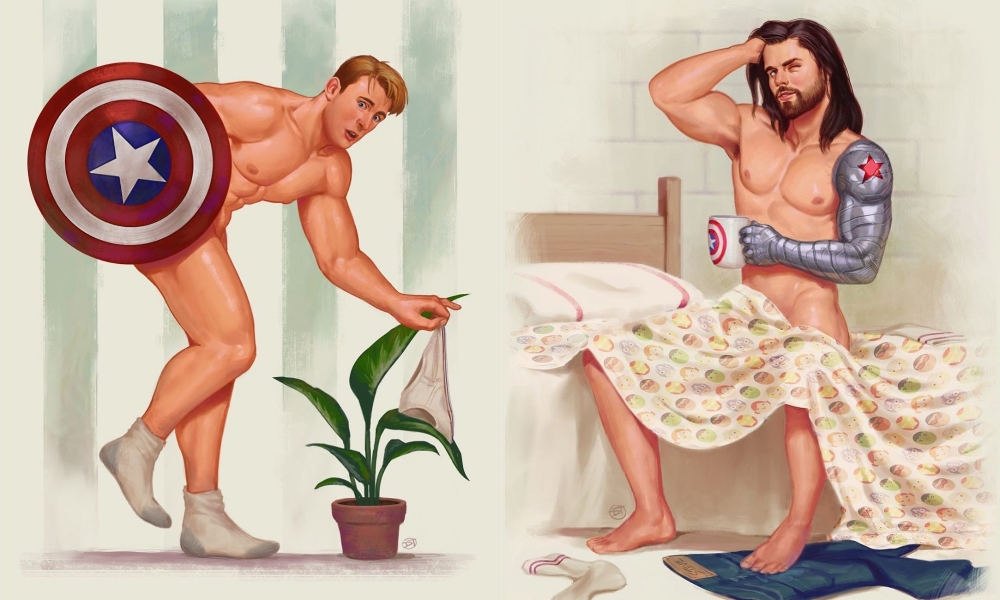 The male heroes of Marvel are usually portrayed as hypermasculine.

Their supernatural stats often included super strength and proficiency in hand-to-hand combat. Also, their costumes are practical and designed to defend against attacks.

However, artist David Talaski-Brown doesn’t see them that way. In Talaski-Brown’s imagination, Captian American doesn’t wield a proto-adamantium shield to protect his body; instead, he uses it to defend his decency.

In a recent series of portraits, Talaski-Brown reversed comic conventions by drawing Marvel and DC superheroes, such as Thor, Captain America and Green Lantern, as 1950s style pinup models.

A 29-year-old artist from Portland, OR, Talaski-Brown flipped the script with male superheroes and gave them playful makeovers that resemble the style in which female superheroes are traditionally drawn.

“There’s always been a lack of s—y male art on comic convention floors,” the artist told POPSUGAR. “I thought this would be a fun way to create some equal opportunity when I tabled at my first convention last year. I’ve always been a big fan of midcentury pinup artists like Gil Elvgren, and the idea of putting male superheroes in similar poses and situations typically portrayed with women felt appropriate and cheeky.”

Scroll through some of our favorite heroes in all their pinup-glory below!

*Reposting – Made a goof and drew a hand backwards. Artist mistakes in real time 😂 —Finished #guygardner #greenlantern art trade for a friend! 💚💚🍑💚💚 This is a custom piece and wont be available for sale in my shop. All other prints will be restocked in the coming weeks 😉