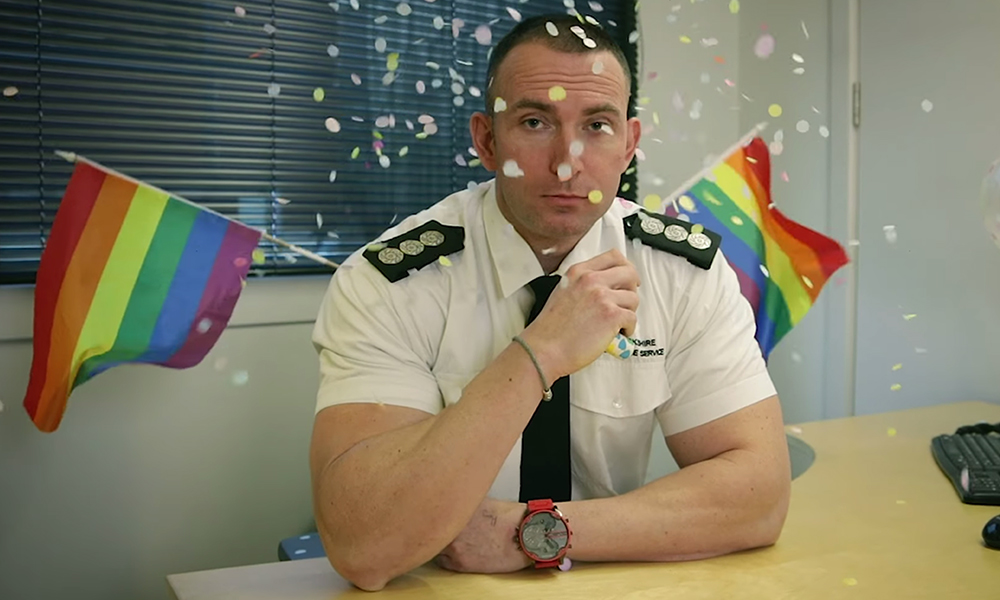 These Firefighters are Fighting Homophobia With Humor

“Fires don’t discriminate, and neither do we.”

I expect that you’ve heard it all before. Every time anything remotely LGBTQ is brought up outside of an explicitly LGBTQ context, the immediate response tends to be dominated by comments crying “political correctness” or “liberal propaganda”. It’s not uncommon to see this sentiment among LGBTQ people either. It takes a brave person (or persons) to broach a subject, fully understanding the inevitable backlash.

Well, who’s braver than a firefighter? A Fire & Rescue team based in South Yorkshire, UK uploaded a clever video combating the backlash they received after adding a rainbow flag to their profile picture. They were inundated with such comments like, “constantly going on and on about who wants to sh*g who shouldn’t be a firefighter’s priority” and “since when did society need to see this from a public institution?”

They made no attempt to address these hateful comments with any degree of severity, instead they lightheartedly maintain that they will continue to “stand with all those LGBT+ people we serve and employ.”

Last year we got a load of abuse when we added the rainbow flag to our profile picture.

Thanks for the comments… 👍#LGBTHM2020 pic.twitter.com/kwzAvKWUjq

The video has amassed nearly 380K views, 16K likes, 4K retweets, and 5K comments. The response is about what you’d expect, with a mix of positivity and negativity (it’s probably best not to venture too far down the rabbit hole).

So, should they have addressed these “concerns” directly? Some of the responses seem to think so. “Interesting how the video doesn’t even try to address any of the points it raises. It simply mocks them,” said one Twitter user.

To that we say a resounding no. Nope. No thank you.

Engaging with these ideas, interacting with them in good faith, is something they are wholly unwilling to do. This is not a back-and-forth conversation. The simple fact is that if they had changed their profile to something that isn’t typically associated with “leftist” ideas then no one would have bat an eye. The problem isn’t that “they’re not doing their job” — because of course they are. The problem is ignorance. If any of these people actually engaged with LGBTQ people or ideas, this wouldn’t be their reaction.

Addressing these ideas in good faith, assumes that these detractors were doing that in the first place. Besides, the department was prepared for the backlash this time.

“We fully expect the video will have a mixed reaction but some of the comments we received last year were awful and totally unacceptable,” says Chief Fire Officer Alex Johnson. “We wanted to support the month and let our staff, and communities, know that we are proud to employ and serve them, regardless of those comments,” he continues.

“We wanted to demonstrate that we are a genuinely inclusive organization that values the contribution of all our staff, whatever their LGBT+ status.”

That is ultimately what this is for. Normalizing LGBTQ issues, making workplaces inclusive, and demonstrating this authentically has a huge impact on LGBTQ lives. It shows us that we are valued in spite of the backlash. LGBTQ people could legal face employment and housing discrimination in the UK up to just 10 years ago. It’s going to take more than 10 years to help assuage the fears of most LGBTQ people in the workplace. It takes bravery, like that shown by South Yorkshire’s Fire & Rescue team. We thank them for their bravery.

These Firefighters are Fighting Homophobia With Humor