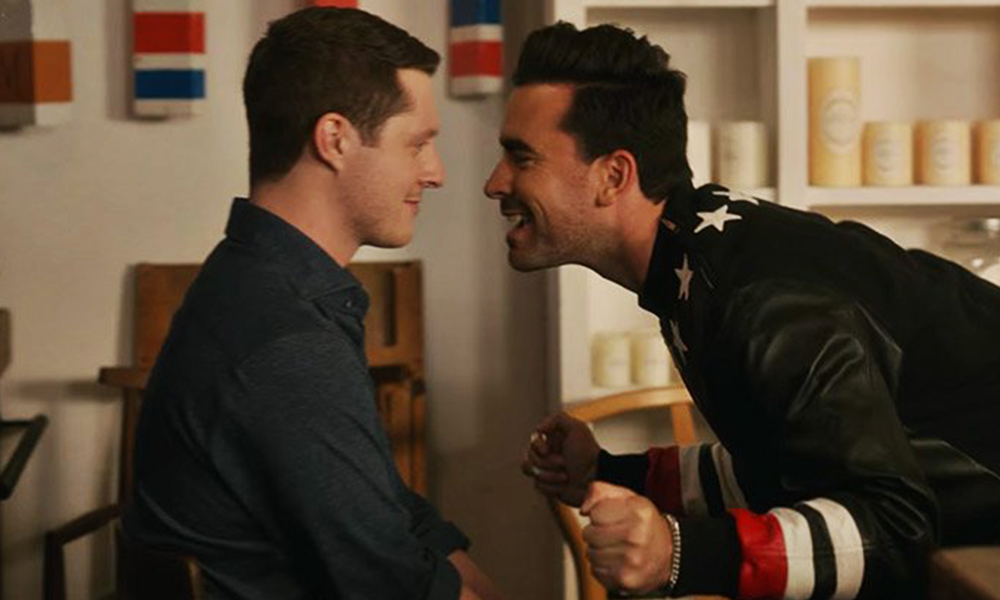 We’re not ready to say goodbye to Schitt’s Creek. The show has it all, and if you haven’t been spending your extended home time marathoning all six seasons in preparation for the finale, there is still time. Just be prepared for the inevitable waterworks, especially in the final season.

One such moment that had us reaching for a fresh box of Kleenex was David’s iconic lip-sync to “The Best” by the incomparable Tina Turner. After going through something of a rough patch — where David may or may not have been enjoying Patrick’s apology gifts a little too much — our leading lover found himself offering an olive branch of his own.

And honey, this lip sync has everything you could want. The hilarity of Bridesmaids’ rendition of “Hold On,” the chemistry of Dirty Dancing’s “Love is Strange,” and the heart of “Nothing’s Gonna Stop Us Now” by Starship in The Skeleton Twins. Watch it here.

This week Entertainment Weekly released a series of stunning digital covers celebrating Schitt’s Creek and our favorite couple. The covers are a tribute to romantic classics, Sixteen Candles, Notting Hill, and Casablanca. They feature David (Levy) and Patrick (Noah Reid) blowing out candles on a cake, lounging on a park bench together, and living their film noir fantasy.

“David’s not a particularly romantic person,” said Dan Levy in an interview with the EW. “You’re scripting it like, isn’t this hysterical? And then you get up to the day and it’s like — I’m not a dancer. I’m not really a performer. The night before I was just learning the lyrics to the song.”

Apparently it took a bottle of Prosecco for Levy and Reid to loosen up enough to shoot it which, honestly is pretty relatable. “As an actor, it was the most unsafe I’ve ever felt, in the sense that I’m going to do something that’s so outside of my own personal comfort zone,” said Levy. “But you get those moments so rarely. So I was like, ah, screw it. Let’s try this.”

We are so glad they did. Not only did it leave us in tears but the whole crew got emotional. “I had always pictured that moment to be quite funny,” said Levy. “The rest of our team behind the cameras were crying. I thought I had done it wrong.”

Like all good rom-coms, Schitt’s Creek will end with a wedding. The two-part episode is sure to send us over the edge but until then…Condragulations, Dan, you are the winner of this week’s lip-sync.