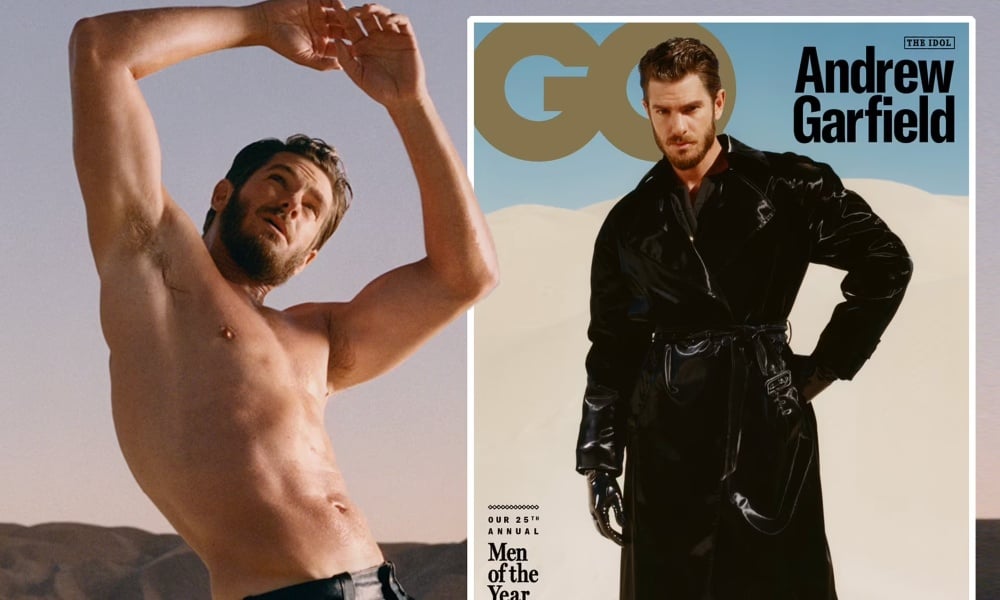 Andrew Garfield is much more than your friendly neighborhood Spider-Man. He’s your friendly neighborhood Spider-Man of the Year. He’s also giving off major leather daddy vibes in this latest shoot from GQ Magazine. Garfield recently secured one of British GQ’s highly coveted Men of the Year slots, along with Jack Harlow and Heartstopper‘s Joe Locke and Kit Connor. To celebrate the announcement, British GQ made Garfield one of the issue’s cover stars. Accompanying the issue is an interview and series of stunning photographs featuring a very shirtless Andrew Garfield in leather pants by Alexander McQueen.

Related | Gay Man Transforms From Jock to Bear in 5 Years

The photography for this cover, taken by the prolific Luke Gilford, is as sublime as Garfield. The 39-year-old is statuesque as he positions himself on the crest of a dune. His hands clasp firmly behind his back as he gazes out into the distance. According to Gilford, they shot all of these photos in an active mining quarry. The evidence of this can be seen in other, less shirtless photos of Andrew Garfield in front of a tangled structure made of twisted metal. He’s dressed in utilitarian-looking clothing like boiler suits and raincoats. The clothes are, of course, anything but. With pieces from Maison Margiela, Gucci, Prada, and Dunhill, they’re not exactly cost-efficient for your average quarry worker.

Andrew Garfield Bares It All

It wasn’t just his chest that Garfield bares in this issue. The tick, tick… BOOM! actor also opened up about many of the pressures and obstacles he faces as his 40th birthday looms in the distance. Garfield spoke about the loss of his mother to pancreatic cancer in 2019, calling it a very major moment for him. “That cataclysm is a forever-reverberating shift into a deeper awareness of reality,” said Garfield. He described this moment as one that led him to ponder his existence and “the shortness of this window we have.”

All of this and more continue to come into focus for Garfield as he steps into a new decade. With this comes the pressure to have kids. “I always thought I would be the first to have kids and settle down,” said Garfield. Meanwhile, Garfield’s high school friends are “all shacked up and a couple of kids deep, for the most part.” Ultimately, as Garfield notes, life is in charge. Garfield calls it a “perpetual practice of letting shit go. Letting go of an idea of how a thing should look, or be, or feel.”

In the end, despite not having kids, Garfield explains that he is happy to have no regrets. Particularly when it comes to his mom. “There was no stone left unturned,” said Garfield. “There was nothing left unsaid.” As many of us who are grieving will know, that is a very special thing. Regret or no regret, however, there will always be longing. “It would be so nice to be able to continue to love her in person,” Garfield continues. “The grief is never-ending. The love is never-ending […] That’s the nature of love.”