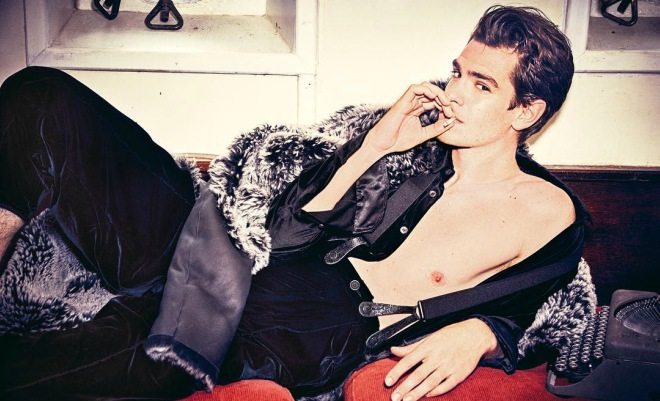 Following the amazing role of Spider-Man, Andrew Garfield stars in the upcoming World War II biopic Hacksaw Ridge. Directed by Mel Gibson, the film is an Australian-American biopic based on actual events and a very real hero.

It follows U.S. Army medic Desmond T. Doss (Garfield), a Seventh-day Adventist conscientious objector who refused to bear arms. Doss saved the lives of more than 75 of his comrades during the Battle of Okinawa. His bravery earned him a Medal of Honor awarded by President Harry S. Truman.

To promote the film, Garfield participated in a Q&A for L’Uomo Vogue‘s Cinema issue. He also sat for a series of photos shot by renowned photographer Ellen Von Unwerth, which included a seductive shot soaked in sex appeal.

When asked how he felt about being part of Hacksaw Ridge, Garfield said, “Right now in my life I feel I need to contribute myself to stories that are reflective of the times we’re in, and asking questions about what kind of future we’re going to create together and the choices we have to make right now as people.”

“But that’s just me, that’s who I am I suppose. I know I struggle to be a part of things that don’t feel personal and urgent and relevant to the struggle I see human beings going through in this very moment.”

Garfield also revealed his next project, stating, “Later in the year I will start rehearsing for Tony Kushner’s pièce Angels in America that will play at the Royal National Theatre in London, directed by Marianne Elliot with a really exciting cast of co-stars like Nathan Lane, Denise Gough, and Russell Tovey.”

You can read the entire interview on L’Uomo Vogue. Hacksaw Ridge comes to theaters on November 4.