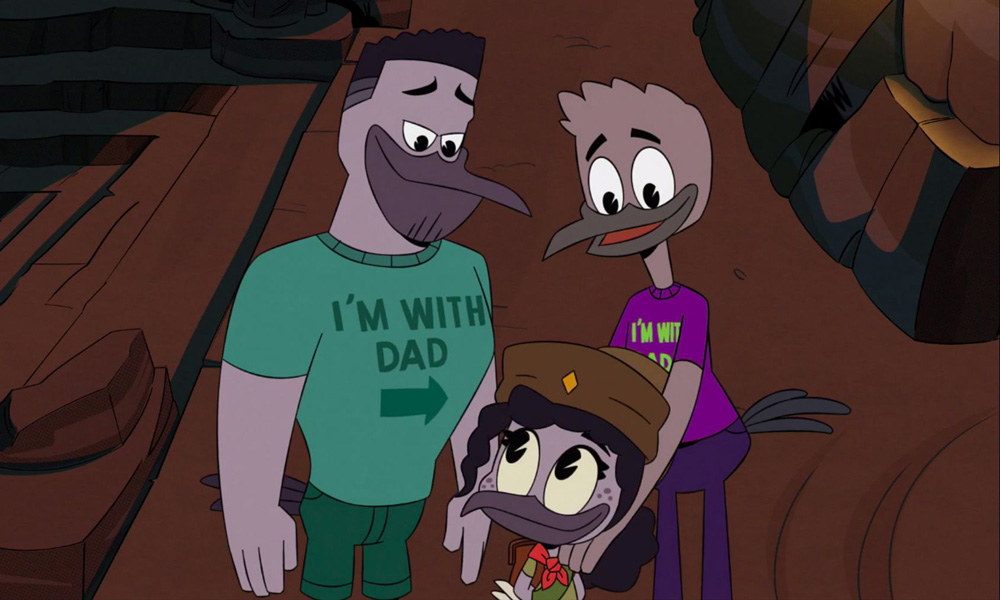 Violet is our new “sister from a couple of misters.”

Disney is really trying it, aren’t they? After that lackluster attempt at representation in Onward, it’s high time we see some real visibility. Who could’ve guessed that we’d be getting it in the form of DuckTales, a 2017 reboot of the popular animated series from the 1980s?

Enter Violet Sabrewing. The young duckling (voiced by Libe Barer) was introduced last season, as was her friend Lena. The season 3 premiere, titled “Challenge of the Senior Junior Woodchucks”, Violet is competing to become a Senior Woodchuck. In the episode, it’s revealed that Lena has been adopted by Violet’s dads, calling her a “sister from a couple of misters.” She sits next to two duck dads wearing those adorably cheesy “I’m with dad” shirts.

watched the new ducktales and !!! violet has gay dads!! pic.twitter.com/CNi38Is5dC

Unfortunately, the dads didn’t have any lines, beyond cheering for their daughter as she raced across Woodchuck Island. Co-executive producer and story editor Frank Angones admitted as much in a Tumblr post. “I’m well aware that the ‘queer representation through parents and background characters’ trope is an issue,” writes Angones. “We’ve sort of stumbled backwards into a lot of heteronormative romances in this show due to legacy characters with pre-existing relationships.”

Uncommonly astute words already for someone in his position and it doesn’t end there. “There’s always opportunity for a lot more; I don’t want a cop-out and a cookie for saying ’look at this one thing we did!’”

Don’t worry, we don’t give out free cookies here. We are however very excited to see what the future holds for DuckTales, Violet, Lena, and their dads.