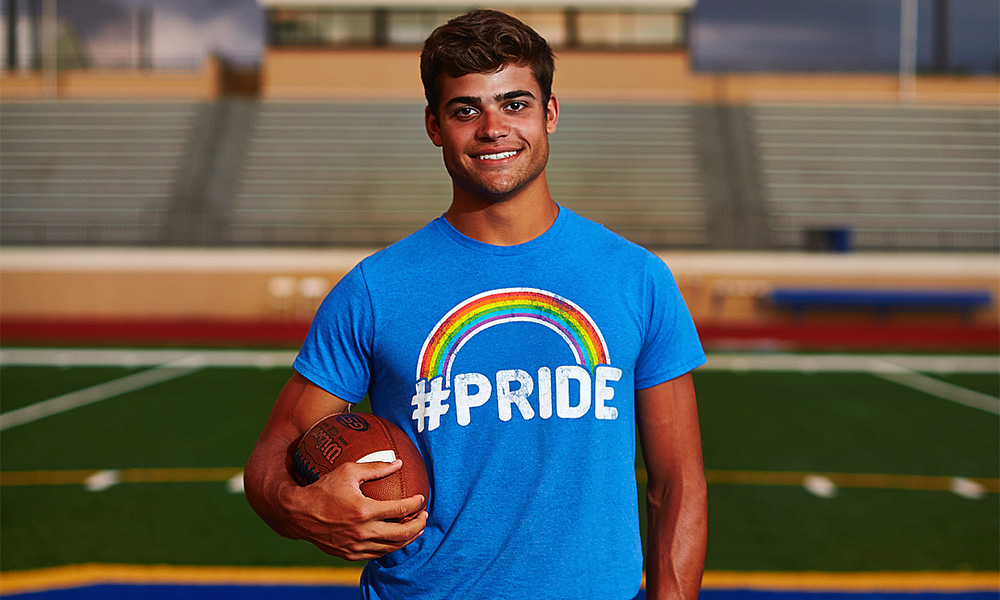 Indiana State football player, Jake Bain, is once again speaking about his experience as an openly gay athlete — this time — in college sports.

As a high school senior, Bain was featured in Instinct after courageously coming out to his fellow teammates. To the surprise of some, the Missouri native was widely supported on and off the field for his decision to share his sexuality.

Now, the 19-year-old is sharing more on his experience with Outsports as he enters the college arena as an out and unlike many athletes, Bain feels football helped his coming out experience.

“Football is one of those unique sports where there is a true brotherhood that is made, especially when we’re around each other for so much of the day, it gives us a lot of time to really bond with each other. A lot of people assume that because you’re playing a sport like football that there’s assumption that it’s a very masculine sport, and obviously it is, but it doesn’t mean that my teammates won’t be accepting of someone who is gay. It shows how the tide is turning and shows how we have something special here. Football gets that hard rep, but I think it creates the biggest bond out of any of the sports I have played.”

With the support of his football brothers, Bain has recently introduced his boyfriend, Hunter Sigmund, to some of the team.

“Hunter came up to Indiana State, and I was walking him around campus and passed some of the football guys and introduced Hunter to them, and they all treated him like they would somebody’s girlfriend. They were really nice.”

Bain goes on to describe how secure he is with his sexuality and relationship status.

“There are times when we’ll be in the dorms playing video games, and I’ll get a Facetime message from Hunter, and I don’t get uncomfortable with that. I don’t feel a need to go into a different room. Everybody knows.”

Even after some backlash from the Westboro Baptist Church, Bain, he hopes his experience encourages a larger group of athletes still contemplating coming out publically.

“I try and not put the spotlight on me but instead on the LGBT community as a whole. There’s a bunch of people like me, but they’re just not comfortable being out.”