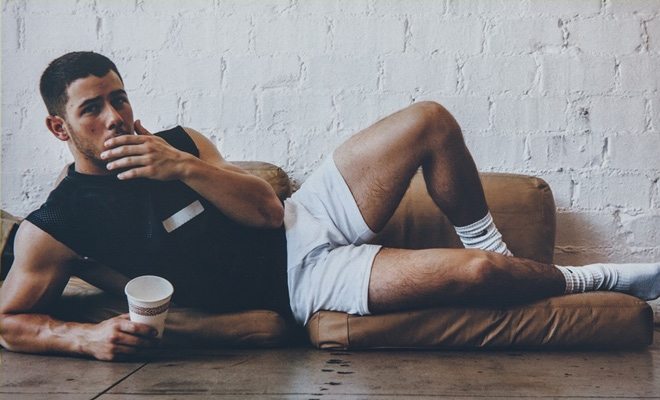 Nick Jonas is a gay-baiter. It’s not necessarily a bad thing, but it’s a thing, and he’s well aware of the criticism. At 24, Jonas has been in the spotlight for a long time, but since pursuing a solo career, he’s repeatedly used the allure of his sexuality to entice his gay and bisexual fans to buy his music.

In an interview with Out magazine, Jonas addressed the accusations saying, “It’s not the majority, but a large handful have a negative opinion for whatever reason, and I think it’s really quite sad.”Jonas addressed the charges again in the Autumn 2016 fashion issue of Wonderland magazine.

Ironically, the interview accompanied a particularly steamy photo shoot in which Jonas leaves little to the imagination. Jonas openly discussed his sexuality and the criticism he regularly receives for being an ally to the LGBT community.

Related: Nick Jonas Confirms He’s Been With a Man

“Sexuality is important as an artist, to embrace and use it as ammunition in your creative life, and understanding that part of your life, and how it makes you feel,” he said.

Big thank you to @WonderlandMag for featuring me on your cover. Issue out now in the UK! See the whole story at wonderlandmagazine.com Photographer – @christianoita Groomer – @mnmachedo Stylist – @samsonstudio and wearing @luisaviaroma Production – @ericacornwall and @ollyw00d

When asked about his relationships with the queer community, Jonas said, “I’ve made so many great friends belonging to the LGBT community, and some of the most talented men and women in the community I’d like to pay my respects to.”

This is how I carry all my stuff around… @wonderlandmag

“Starting in theater growing into the performer I am today, I’ve made so many great friends belonging to the LGBT community. The positive impact is ten times more important than the negative comments.”

He also talked about his upcoming fraternity-hazing movie, Goat, opposite another accused gay-baiter, James Franco. When asked what drew him to the role, Jonas affirmed that he believed the film sparked dialogue around the controversial practice of hazing in fraternity culture.

“I think it’s a conversation that is important at this moment because they’re so many of these stories in recent years of young men pushing each other to a point where it’s all just so dangerous,” Jonas told Wonderland.

Coffee in the morning… @wonderlandmag

He went on to defend the premise of the film, saying, “At the center of the film, as far as themes go, is masculinity: and what that looks like at 16, and the pressures forced onto these young men and the stakes that become so high. So being able to tell that story in a way that feels very grounded and very real, and starting a conversation, was important.”

For more from Wonderland, click here, and look for the Autumn 2016 issue on newsstands in the United States this week.