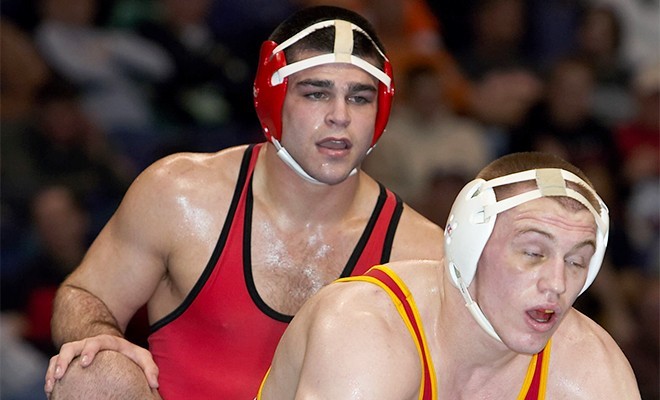 Mike Pucillo is a three-time All-American and NCAA Division 1 Champion (whatever that means) and he’s gay.

According to Jason Bryant at The Open Mat, Ohio State wrestling champ Mike Pucillo came out to his best friend and teammate, Reece Humphrey.

“I think telling him was an unbelievable weight off my shoulders (and) I didn’t think I would feel that good just telling him,” said Pucillo, the first openly gay Division-I national champion wrestler. “Reece has always been someone with a very open mind and I thought maybe he would understand.” (Pucillo)

Although Pucillo and Humphrey are close, Pucillo’s coming out was a surprise. Despite his initial disbelief, Humphrey responded, as a best friend should, and sent a sincere and encouraging text message

“I’m honestly so happy for you! I had no clue, but all I can say is I love you so much! I won’t tell anyone ever. It’ll always be your decision and I’m freaking crying that you chose to tell me first. You’re my best friend and I am so pumped that you got the first step off your back.” (Humphrey)

The three-time All-American champion stated that he wrestled with his sexuality for years, and that in high school he hoped he wasn’t gay.

“You try to not think that’s what it really is, so I just tried to say it was nothing. Then you start to realize it’s not really nothing.” (Pucillo)

College wrestling is a testosterone-driven contact sport, and you might think that a gay athlete would be problematic. However, Humphrey reassured Pucillo that being gay isn’t an issue.

“As big of a deal as I’m sure it seems, it’s really not. You are a badass and you are a tough-ass wrestler, but literally no one would ever care about your sexuality.” (Humphrey)

Pucillo hopes that his coming out will inspire other young athletes to be true to themselves and not fear their sexuality.

“The only reason why I feel it’s important to tell my story is I know there are a lot of other people out there that are like me who are in high school or about to go into college, whether it’s wrestling or football or baseball or basketball or not in any sport, who are struggling with it,” he said. “The more stories they hear about it, the easier it is for them.” (Pucillo)