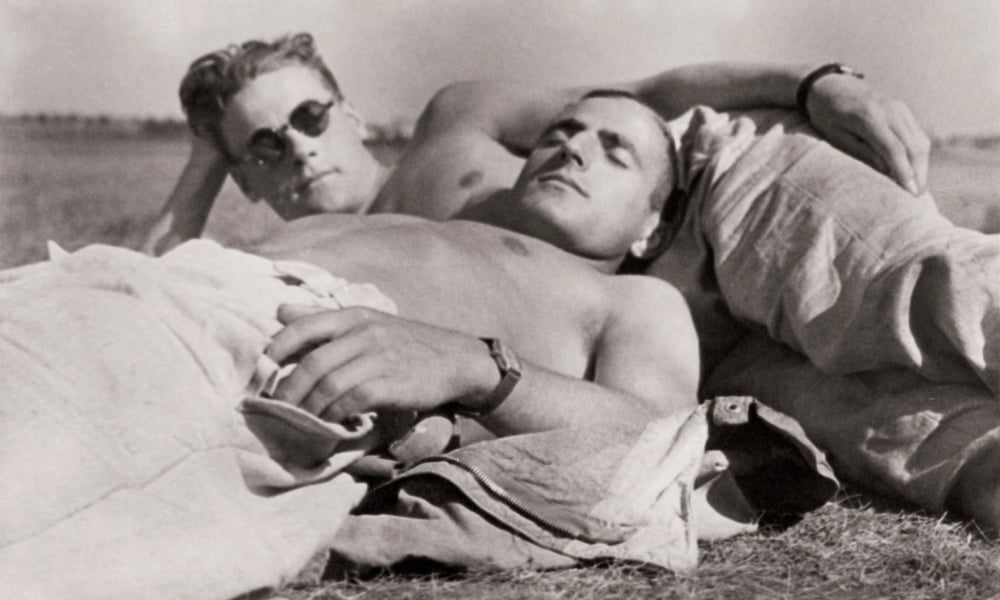 It’s no secret that gay people have always been here, although you could be forgiven for thinking that it was. For as long as we’ve been here, there have also been others so threatened by our existence that they devoted their lives to disenfranchising us, marginalizing us, de-platforming us, and erasing us from history.

The result is a scattered, broken history — one that we have to piece together. But make no mistake, the pieces are there. You just have to be tenacious enough to take on the challenge. Enter husbands Hugh Nini and Neal Treadwell and their  “accidental” passion project, “LOVING: A Photographic History.”

The book is a collection of vintage photos of men in love from the mid 19th to the mid-20th century, and it is a breath of fresh gay air. “Our collection began twenty years ago when we came across an old photo that we thought was one of a kind, ” explained Nini and Treadwell. The couple stumbled upon this photo in an antique store in Dallas, and they were hooked.

“We looked at that photo, and it seemed to look back at us. And in that singular moment, it reflected us to ourselves.” they continued. “We were intrigued that a photo like this could have survived into the twenty-first century. Who were they?”

We’ve all seen the memes. The tiresome insistence that any representation of same-sex intimacy in history must be an example of “close friends.” There’s an entire subreddit dedicated to it, for crying out loud.

The truth is that while we may never know for certain the nature of these relationships, assuming these people are straight is also speculative. With that in mind, let’s take these photos at face value. “These two young men in front of a house were embracing and looking at one another in a way that only two people in love would do.”

Related | 44 Vintage Photos of Gay Men in Acts of Love

Nini and Treadwell have spent the last 20 years collecting photos just like this and compiled it into an incredible 336 pages. Check out some of our favorites below. An undated photo of two men in bathing suits alongside a boat. Taken when male partnerships were often illegal, many of the photos show two men secretly sharing their enthusiasm for their time together. Two young men hold a pre-printed sign, approximately 120 years ago, proclaiming their bond and willingness to be legally wed to one another. Postcard of two men seated on a “man in the moon” backdrop circa 1910. Undated photograph obtained in the United States of two shirtless men lounging together in the sun. An undated photograph of two men embracing and kissing one another. Two men in fedoras mime as if they’re dancing atop a pillar in this undated photograph. Two men embrace behind the caboose of a train in this undated photo. Undated photo strip of two men who appear to be blue collar workers. Two men of color in uniform photographed together, dated 1951. Men in uniform were photographed with their arms around one another. Two men kissing in an undated photo by the seaside. LOVING: A Photographic History of Men in Love, 1850s-1950s by Hugh Nini and Neal Treadwell, published by 5 Continents Editions, is available now.