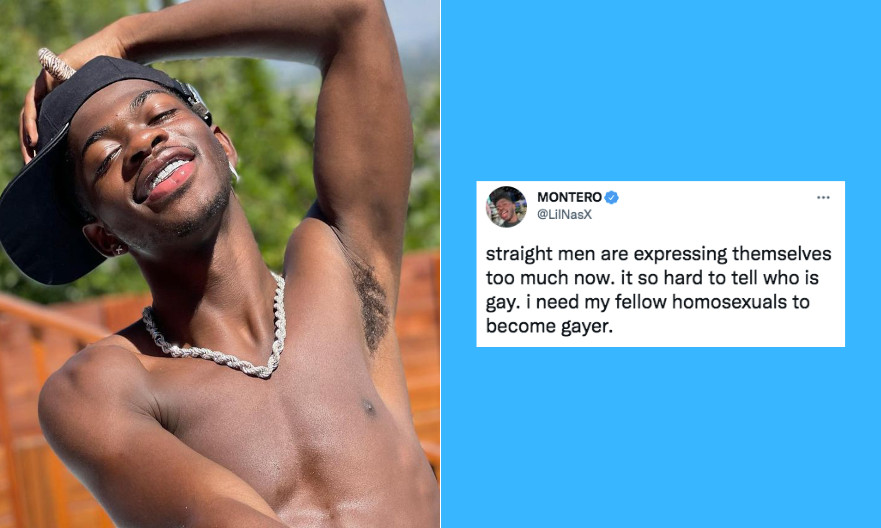 Lil Nas X Asks Gay Men To Be Even Gayer

Rapper and queer icon Lil Nas X made his Twitter comeback after a three-month hiatus, and he has a lot on his mind. Since his social media return, the Grammy winner’s Twitter feed has been going off nonstop — from teasing to new music and possible collaborations to strategic thirst traps showing off his six-pack.

Now, the “Montero” singer is calling on his gay following to get a little gayer. He tweeted, “straight men are expressing themselves too much now. It so hard to tell who is gay. I need my fellow homosexuals to become gayer.”

straight men are expressing themselves too much now. it so hard to tell who is gay. i need my fellow homosexuals to become gayer.

Let the Gays Be Gayer

We are sure this tweet is in jest; Lil Nas could be referencing the social media phenomenon known as “queer-baiting,” where straight men utilize gay aesthetics, slang, or trends to capture and sometimes mislead a queer audience.

While we love any straight man willing to be genuinely non-conforming, we don’t love a straight man who uses a community of marginalized people to gain likes, comments, or followers.

Lil Nas’ tweet adds to a continued conversation regarding the challenges many men face when attempting to shift the societal awareness of gender expectations and stereotypes.

Many fans of the entertainer were quick to respond in support of the request tweeting their gayest responses, memes, and gifs — some a little too NSFW for us to share here.

i literally cant get gayer

This isn’t the first time Lil Nas has shared his thoughts about the straight community.

In 2021, after backlash from his “Montero” music video, he said, “at first, I was really afraid of alienating any of my straight fans, but then it was kind of like if they feel offended, they were never really here for me. They were here for whatever version of myself they made up in their head.”

Do you think straight men need to stay in their lane, or are we moving toward more evolved and fluid gender norms?

Every person regardless of their sexuality or gender deserves to live life authentically.

Lil Nas X Asks Gay Men To Be Even Gayer