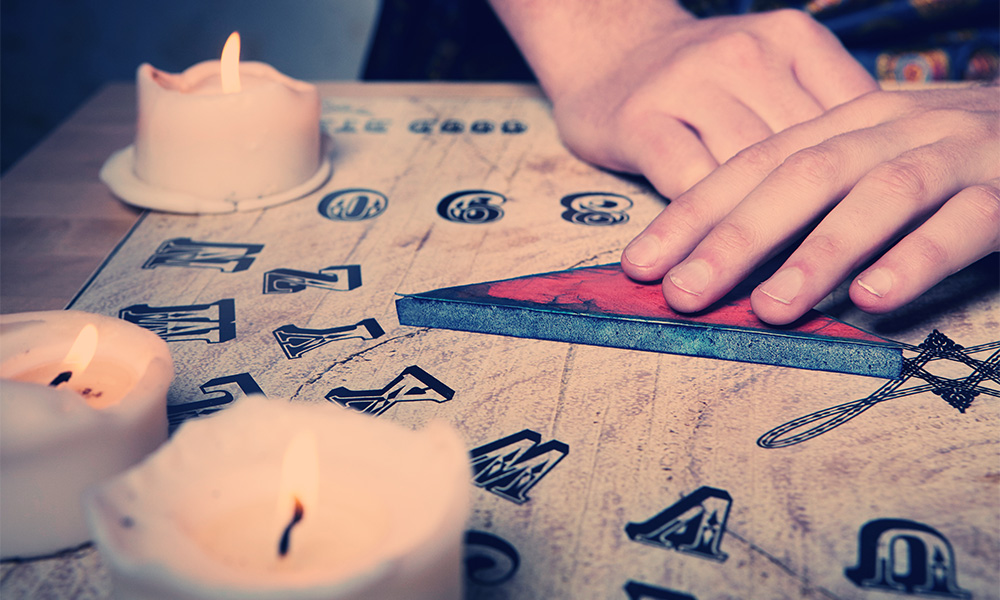 How the Ouija Board Got Its Sinister Reputation

By now, most have vague notions of the Ouija board horror narrative, in which demonic spirits communicate with — even possess — kids. Director Mike Flanagan furthers this trope in his new film Ouija: Origin of Evil. Set in 1967, a widow and her daughters earn a living scamming clients seeking to contact dead loved ones. The family business is relatively harmless until the youngest daughter discovers an old Ouija board, attempts to contact her deceased father and instead becomes possessed by evil spirits.

The Ouija board, however, didn’t always have this sinister reputation.

In fact, the Ouija board developed out of Spiritualism, a 19th-century movement known for its optimistic views about the future and the afterlife. As Spiritualism’s popularity waned, the Ouija board emerged as a popular parlor game; it was only in the 20th century that the Catholic Church and the horror movie industry rebranded the game as a doorway to the demonic.

The Spiritualist movement is often said to have begun in Hydesville, New York, in 1848, when two sisters, Kate and Maggie Fox, reported hearing a series of mysterious raps in their tiny home. No one could discern where the raps were coming from, and they manifested in other houses the sisters visited. With no apparent source, the raps were attributed to spirits, and they appeared to respond to the sisters’ questions.

The Fox sisters became overnight celebrities, and Spiritualism, a religious movement based on communicating with the dead, was born. Spiritualism spread across the Atlantic and into South America, but its popularity surged in the wake of the Civil War. The bloodiest war in American history had left many grieving families longing for ways to speak with their lost loved ones, and many sought comfort from spirit “mediums” — people like the Fox sisters who could allegedly talk to the dead. In 1893, Spiritualism became an official religious denomination, and in 1897, The New York Times reported that Spiritualism had eight million followers worldwide.

From the start, Christian critics claimed Spiritualism was just thinly disguised witchcraft. But Spiritualists were rarely dark or morbid. Spiritualist writer Andrew Jackson Davis even challenged the very idea of hell, asserting that all spirits can enter a blissful “Summerland” in the afterlife. Spiritualists also supported progressive causes, including abolition, temperance and women’s suffrage.

In their heyday, the Spiritualists developed numerous techniques and devices for talking to the dead. Early Spiritualists engaged in a practice called “alphabet calling,” in which someone rattled off the alphabet until the spirit rapped to indicate a specific letter. This labored method created a demand for more efficient ways of communicating with the dead. 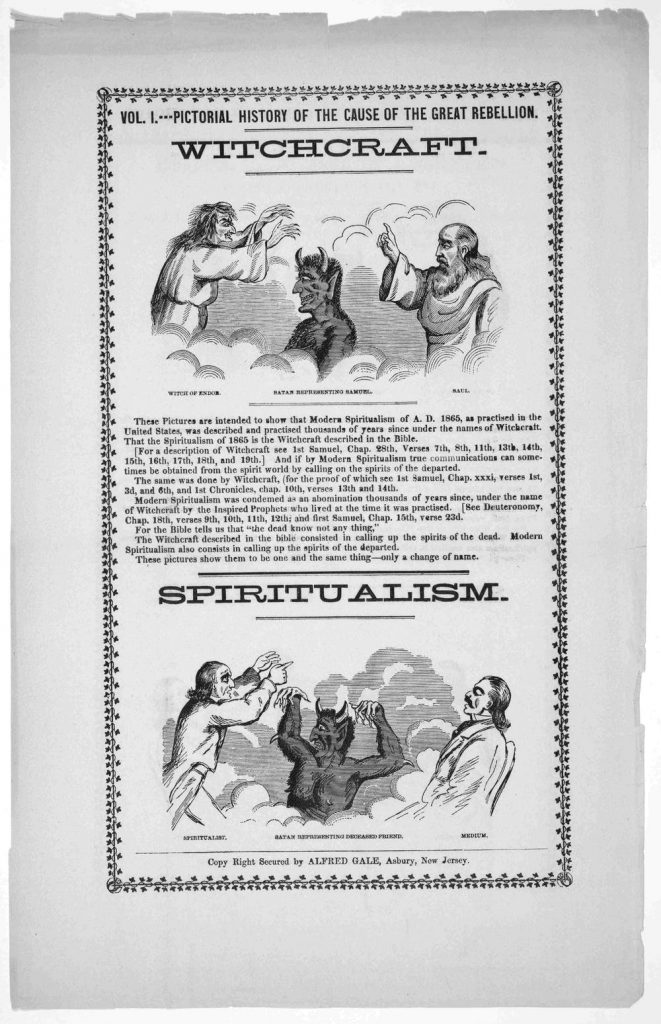 Some mediums engaged in “automatic writing.” The medium would enter a trance state and allow the spirits to guide their hand as they wrote messages (a phenomenon that’s also featured in the film). French Spiritualist Allan Kardec reported that during an 1853 séance (literally “a sitting” or session talking to spirits), the spirits suggested that the participants stick a pencil through an upside-down basket. This allowed everyone to place their hands on the basket to help the spirits guide the pencil across the paper. The basket evolved into a device called a planchette (from the French planche, meaning board).

By 1886, Spiritualists had developed the planchette further. The pencils were discarded and the planchette was paired with a board with the alphabet written on it. There were numerous models of these “talking boards.” Brandon Hodge is the foremost historian of these automatic writing devices, with a private collection of over 200 planchettes, as well as talking boards and other séance apparatus.

The design that most Americans know today was patented by the Kennard Novelty Company in 1891. Helen Peters, a sister-in-law of one of the company’s founders, asked the board what it should be named and received the cryptic answer “Ouija.” In 1882, William Fuld became supervisor of the company. Fuld made a fortune on the Ouija board and opened several new factories. Eerily, he died in 1927 when he fell from the roof of a factory he claimed the board had instructed him to build. 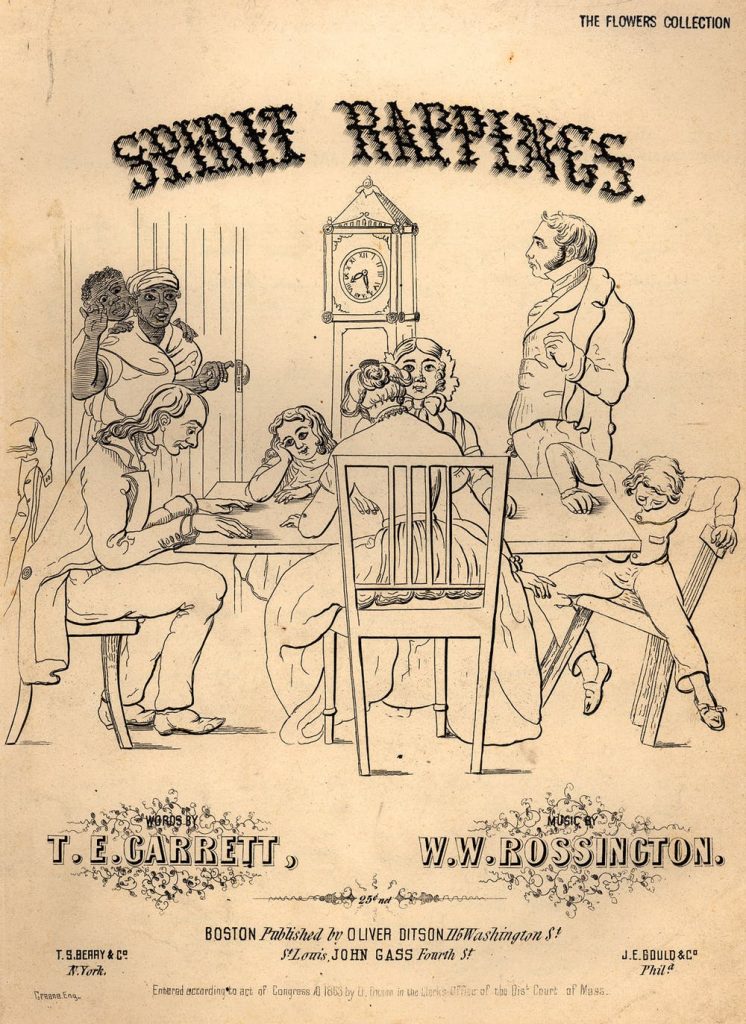 From parlor game to portal into hell

By the 20th century, Spiritualism’s popularity had begun to wane, partly due to the work of frauds.

While most mediums claimed subjective experiences of spirits during trance states, so-called “physical mediums” engaged in increasingly elaborate chicanery to convince audiences they were having a genuine encounter with the supernatural. Some of these tricks, such as concealing children inside cabinets where they could make noises or move objects, are depicted in Flanagan’s film. In the 1940s, the National Association of Spiritualism banned physical mediumship. But by then the damage had been done. Most people thought you were a sucker if you believed you could talk to the dead.

The Ouija board was generally regarded as a parlor game with little connection to the occult. But during World War I, the Ouija board’s popularity spiked, especially on college campuses. Folklorist Bill Ellis reports that by 1920, one professor had declared it “a serious national menace.”

Meanwhile, many American Catholics who already prayed to the saints had been attracted to Spiritualism. Church authorities moved quickly to counter this.

J. Godfrey Raupert was a “psychic investigator” who hoped to scientifically “prove” Spiritualism before he converted to Catholicism and renounced it. Pope Pius X commissioned Raupert to warn Catholics about the Ouija board. In 1919 he published a book called “The New Black Magic and the Truth About the Ouija Board.”

“For more reasons than one,” Raupert inveighed, “the board should not be tolerated in any Christian household or placed within the reach of the young.”

Despite such warnings, sales continued to grow. They peaked during 1960s, when, boosted by counterculture and popular interest in the occult, the Ouija board outsold Monopoly.

But it was William Peter Blatty’s 1971 novel “The Exorcist” — together with its 1973 film adaptation — that cemented the the Ouija board’s sinister reputation in the popular imagination. Blatty based his story on an actual case of an allegedly possessed boy that occurred in Maryland in 1949. According to a “diary” seen by Jesuit priests Blatty met at Georgetown University, the boy had been introduced to the Ouija board by an aunt who was interested in Spiritualism; the first signs of the boy’s possession began shortly after the aunt died. Blatty’s story took these details and filled in the gaps.

The result was a national obsession with exorcism and the demonic.

Ouija: Origin of Evil pays homage to the film adaptation of “The Exorcist.” The trailer shows a young girl in the so-called “hysterical arch,” recalling the famous contortions in the film. This pose was first popularized by early French neurologist Jean-Martin Charcot, who photographed women in “hysteria” and suggested this condition was the true cause of demonic possession.

Paradoxically, this demonic reputation only enhanced the Ouija board’s popularity with adolescents. The board wasn’t just a way to talk to a dead relative; it also became a way to conjure up dark forces and dismiss them from the safety of one’s basement. Ellis suggests that as a window to the demonic, the Ouija board allows teenagers to “participate directly in myth.” In this sense, it’s a quasi-religious experience, in which the board conjures up a demonic “anti-world” that brave adolescents can challenge and reject.

Meanwhile, thrill-seekers who don’t want to get so personal with the demonic can simply watch the movie.

How the Ouija Board Got Its Sinister Reputation