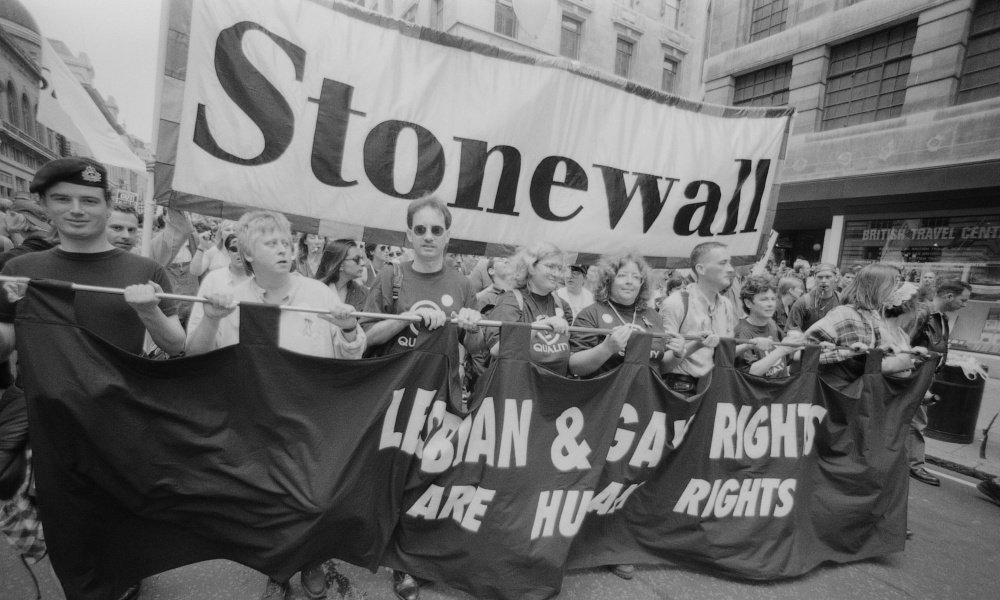 How the New York Media Covered the Stonewall Riots

The Stonewall riots were a six-night series of protests that began in the early morning of June 28, 1969, and centered around the Stonewall Inn, a gay bar in New York City.

Four days earlier, on June 24, 1969, the police, led by Deputy Inspector Seymour Pine, raided the Stonewall Inn and began arresting bar employees and confiscating liquor. But when Pine led a second raid on the 28th, patrons fought back. Approximately 150 people fled, regrouped on the street and stormed the bar, trapping the police inside. The protesters began throwing bricks, bottles and garbage, and attempted to set the bar on fire.

For six nights, protesters clashed off and on with police, while chanting and marching in and around Christopher Street.

Today, many credit the protests with sparking the LGBTQ rights movement. But at the time, if you were a New Yorker reading the local, mainstream papers, you wouldn’t know that a new civil rights movement was unfolding in the city.

As someone who studies the history and role of the alternative press, I’ve researched how the Stonewall riots were reported in New York’s mainstream and alternative publications.

In the days after the Stonewall riots, depending on which paper you read, you would have been exposed to a vastly different version of events. The major dailies gave a megaphone to the police, while alternative outlets embedded themselves among the protesters.

When the press inadvertently outed people

To understand the differences in media coverage, it’s important to recall the relationship between gay people, the press and the police prior to Stonewall.

In 1969, homosexual acts were illegal in every state except Illinois. In New York — home to the largest gay population in the U.S. — police aggressively and systematically targeted places frequented by gay men.

If arrested, a person’s name, age, address and crime would be published as part of the police blotter in most local newspapers across the U.S. For example, if a man was arrested for committing a “homosexual” act in Dayton, Ohio, his information would be published in the Dayton Daily News. Such publication often had disastrous consequences for the person “outed” in print.

Many were disowned by their family, fired from their workplace or dishonorably discharged from the military. Some were targeted for assault or murder.

Gay men, therefore, were forced underground. Christopher Street in Manhattan’s Greenwich Village became a fairly safe locale with bars and coffee shops that surreptitiously catered to a LGBTQ clientele. These bars often were run by the Mafia, which owned the cigarette machines and jukeboxes, and sold watered-down liquor.

Unlike many clubs, the Stonewall Inn, which opened in March 1967, was on a main thoroughfare instead of a side street. The clientele was mostly men, though even marginalized segments of the LGBTQ community frequented the bar because of its two dance floors.

On average, police raided bars once a month, though they typically would warn the bar that a raid was coming and time the raid to minimize disrupting the bar’s business. Police raids usually were accepted by bar employees and clientele.

However, this time was different. Stonewall’s patrons already were upset about the June 24 raid, so when one person resisted arrest, others joined in. The situation quickly escalated.

The big dailies give the police a platform

The scene was tense and chaotic.

Inside Stonewall, Pine gave his officers the order not to shoot, fearing that any additional escalation could lead to a full-scale massacre. Outside, hundreds of protesters were throwing almost anything they could get their hands on, while others were trying to find a way to set Stonewall on fire with the cops inside.

Yet the mainstream media largely failed to adequately cover the protests.

The three city dailies — The New York Times, The New York Daily News and New York Post — wrote a smattering of stories in which they quoted exclusively police sources and offered little context. The story was framed as an instance of lawless youth run amok — an almost unprovoked riot.

For example, the Times’ first Stonewall article, “4 policemen hurt in ‘Village’ raid” began “Hundreds of young men went on a rampage in Greenwich Village shortly after 3 a.m. yesterday after a force of plainclothes men raided a bar that the police said was well known for its homosexual clientele.”

The mainstream papers at least covered Stonewall. Local TV stations failed to even report on the riots happening in the heart of Manhattan.

In contrast, the most popular local alternative paper, The Village Voice, gave the riots front-page coverage. It included interviews and quotes from the protesters, as well as two first-person accounts by Voice reporters Howard Smith, who was trapped inside the bar with police officers, and Lucian Truscott IV, who was outside with protesters.

Both reporters initially witnessed the riot from the Voice offices, which were a few doors down Christopher Street from Stonewall.

The alternative press rises to the occasion

The Voice’s coverage featured many hallmarks of alternative publications.

By incorporating the views of both protesters and police, they created a more complex, nuanced story. And the paper framed the Stonewall riots as an expression of liberation instead of rebellion, with Smith writing that the protesters were simply “objecting to how they were being treated.”

However, the Voice coverage was far from perfect. The anti-gay tone in Truscott’s piece angered protesters, as did some of the paper’s long-held editorial policies against same-sex personal ads.

While the Voice often was left-of-center politically, it wasn’t as radical as some of its more underground counterparts — the Rat, the East Village Other and the Berkeley Barb, all of which also covered the Stonewall riots.

Still, the Voice served as an important platform for the otherwise voiceless left out of the mainstream discussion during both Stonewall and the paper’s 60-year run. The Voice closed in 2018, following the shuttering of similar publications in Boston, Baltimore, Philadelphia and San Francisco.

An alternative press has existed alongside the mainstream since the earliest days of the nation. These papers play an important role in the U.S. media landscape by covering stories and topics that go unreported by their mainstream counterparts. They often forego the pretense of objectivity for activism; rather than quote government officials and business leaders, they’ll quote people on the ground.

Fifty years after Stonewall, it’s important to reflect on the gains of the LGBTQ movement. But it’s equally important to think about what’s lost when alternative newspapers stop publishing — and thus stop covering unreported, underreported or misreported stories.

Chad Painter is an Assistant Professor of Communications at the University of Dayton.

How the New York Media Covered the Stonewall Riots