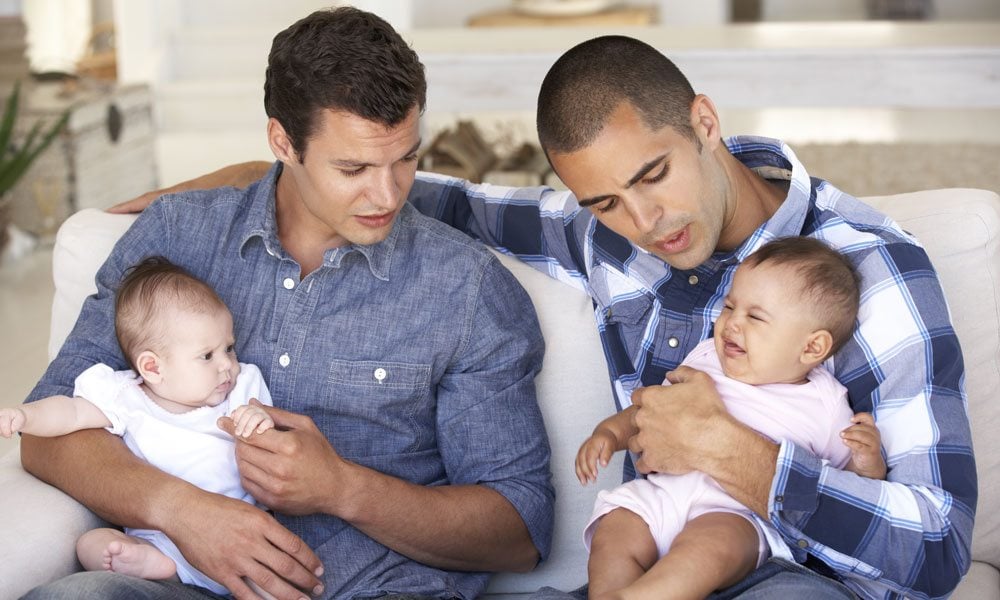 Gay dads and the art of raising a family.

He’s not the only authority defying the 2015 Supreme Court ruling that made marriage equality the law of the land. So-called “religious freedom” bills in Texas, South Dakota and Alabama could let private adoption agencies discriminate against same-sex couples. When pressed on the question, Education Secretary Betsy DeVos recently refused to tell lawmakers whether she believes the federal government should deny government funds to schools that discriminate against the children of LGBT parents – or LGBT students.

Maybe these officials, judges and lawmakers should check out the research on how gay parents differ from straight parents. So far, most of this scholarship has focused on the social, emotional and cognitive outcomes of children they raise. (Spoiler alert: These kids turn out fine.)

As a former teacher who now researches gay dads and their families while pursuing a doctorate in education, I am studying how the growing number of men married to other men are raising their children. So far, I’m finding few differences between them and their straight peers of similar socioeconomic status – especially regarding their children’s schooling.

Since the Census Bureau estimates but does not count the number of households headed by two fathers, it’s hard to track them.

Plans were taking shape for the Census Bureau to begin counting same-sex-parented households in 2020. They seem unlikely to move forward due to recent budget cuts, the census director’s recent resignation and the political climate.

How do parents in these families settle into specific roles? In short, just like heterosexual parents do.

Research suggests that affluent, white, two-father households adhere to traditional parenting roles. One is the primary breadwinner, while the other earns either less income or none at all and handles most of the caregiving and chores.

However, two-dad households can challenge the 1940s Norman Rockwell image of gendered parenting – just like heterosexual couples can.

Households with two fathers working full-time rely on daycare facilities, babysitters, housekeepers and nearby relatives for support. Some of these men even take on responsibilities based on skills and strengths, rather than who fits the socially and culturally constructed mold of being more “motherly” or “fatherly.”

And that’s where the parenting of gay dads may differ from a traditional heterosexual household, as my research and the work of other scholars suggests.

While interviewing and spending time with 20 two-dad families living in the Northeast for my current study, I have learned that they’re apt to step up. Many become involved as classroom parents, voluntarily assisting teachers, reading books or leading singalongs. Some take leadership roles by becoming active PTA members or organizing events that go beyond their children’s classes. In some cases, gay fathers become PTA presidents or serve on school boards.

Like all civically engaged parents, gay fathers support their local museums and libraries and enroll their kids in camps and extracurricular activities. They sometimes do additional volunteer work for social justice groups.

The largest-scale survey to date was conducted in 2008 by the Gay Lesbian Straight Education Network, an organization focused on the safety of LGBT students in schools. That study, which included 588 LGBT parents, suggested that gay fathers could be more likely to be involved in school-based activities than heterosexual dads.

Aside from the simple fact that they love their children just like all parents do, Abbie Goldberg, a Clark University researcher, and her colleagues have shown that increased presence may be due, in part, to fathers’ initiatives to counter bias and assert more same-sex visibility and inclusion in schools. My current study, indicates the same. Many of the men taking part have told me that being actively involved helps them preemptively counteract potential negative encounters with school personnel and other families.

Gay dads prefer schools and communities that are safe and inclusive. Beyond that, they want judges like Nance and lawmakers bent on barring them from fatherhood to see that two-dad families are for the most part just like any other family.

Andrew Leland is a Ph.D. Candidate at the Graduate School of Education at Rutgers University