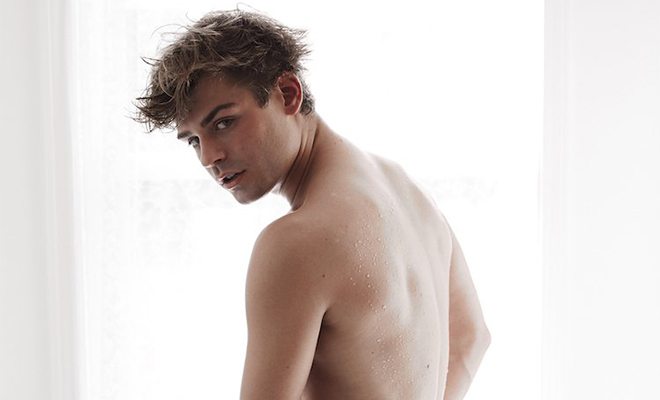 In a fascinating interview with Out magazine, Garrett Clayton, the 25-year-old star of King Cobra, opened up about filming love scenes and his attraction to nudity.

“I like to be as naked as possible,” says Clayton. “If friends come over, I’ll just have on basketball shorts with no socks, no shirt, and maybe underwear. I hate clothes.”

“When a sexual act was happening, Justin and I talked about how it promoted the plot. If it didn’t, I wouldn’t do it.” On the film’s edgy storyline, Clayton added, “We never wanted to mock it or make it seem like we were making a joke out of it.”

Clayton went on to discuss his experience recreating the infamous career of Brent Corrigan, and the commented on casualness of filming. In regards to the application of Corrigan’s famous star tattoo on his butt cheek, Clayton said, “The makeup artist is painting my ass, and the AD [assistant director] is like, ‘We’re losing light!’ And I’m like, ‘This is gonna project about 40 feet high, and I’m gonna see it for the rest of my life. So let’s get it right.’”

You can read the entire interview on Out.com, and see the film in theaters on October 21. Watch the steamy trailer below!