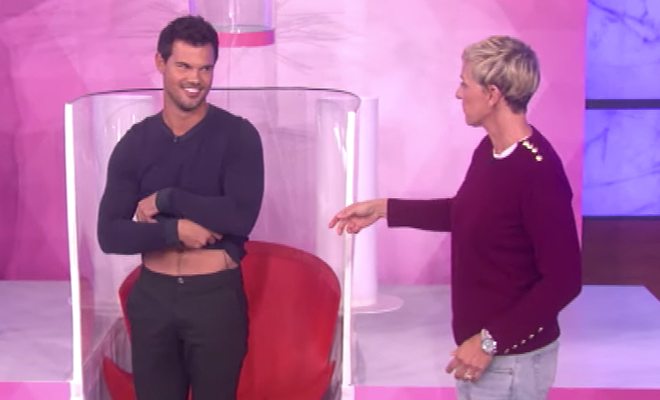 In the last week, The Ellen DeGeneres Show served a plentiful buffet of beefy bods. First, she sold the clothes right off a model and then she convinced Twilight star Taylor Lautner to expose his tight tummy.

The 24-year-old actor stopped by the show to promote Scream Queens and ended up talking about crazy fans and playing a game of “Oops! My Water Broke.”

Unfortunately for the audience, Lautner kept his shirt on (yes, even in the dunk tank), but he did show off his tummy. On a past visit to DeGeneres’s show, an excited fan was invited to come to the stage to meet Lautner, but when she refused to stop stroking his abdomen, things got a little weird.

“I just wanted to talk to her, and she wouldn’t stop rubbing my stomach,” he recalled. Ellen followed up by asking, “Do people do that to you a lot? They just want to feel your abs?”

Lautner answered, “Sometimes yes. I guess because they watched it on screen they feel like it’s theirs. It’s so strange, they don’t even ask. They just reach over and start touching me as I’m talking to them.”

In the end, Lautner gave the audience a peek at his toned torso before being pummeled with water balloons to raise money for the Breast Cancer Research Foundation.

As a parting gift, he took home a handful of Ellen undies. He should probably try them on and post a pic on Instagram so we can make sure they fit properly.

Everyone thinks we come to @theellenshow to promote our show.. Nah just for the underwear ?