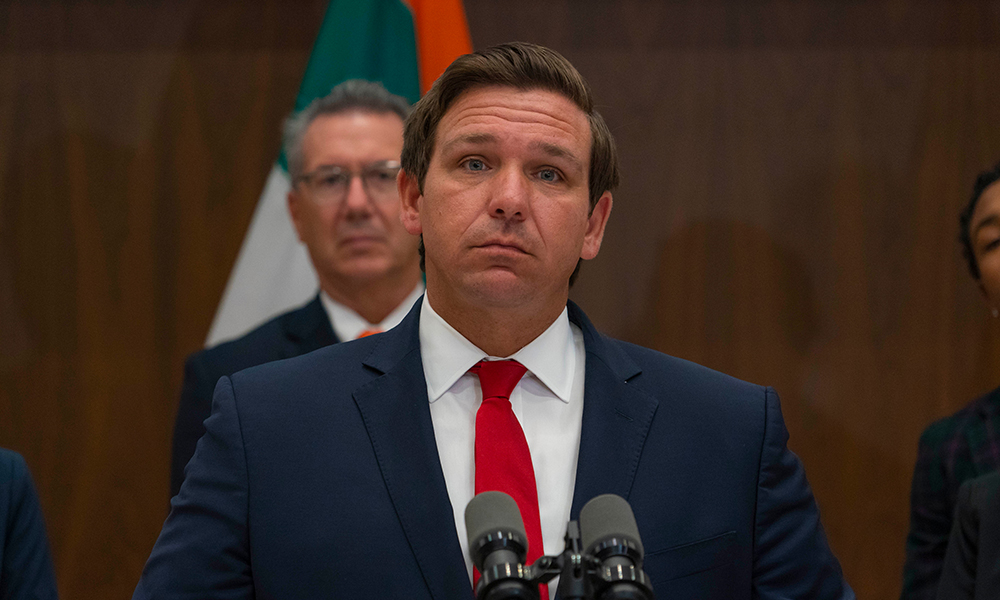 The only thing now standing between Florida students and the hateful “Don’t Say Gay” bill is Gov. Ron DeSantis’ signature.

By a vote of 22-17, the Florida Senate passes the hateful Don’t Say Gay bill and sends it to the desk of @GovRonDeSantis for a signature. Republicans Jeff Brandes and Jenn Bradley join Dems in voting no.

If DeSantis signs it into law, HB 1557l would ban classroom instruction on sexual orientation completely in kindergarten through third grade. The law would restrict educators from teaching about these subjects “in a manner that is not age-appropriate or developmentally appropriate for students in accordance with state standards.” The bill dubbed the “Don’t Say Gay” bill by its opponents, would also allow parents to sue schools or teachers that engage in these topics.

Some of the phrasings in this bill are worryingly vague. If signed, the bill could create an unsafe environment for students to come out to teachers, counselors, or even other students. The bill could require that report this information to parents, meaning students could face ramifications at home.

The Senate also rejected a series of amendments proposed on Monday, with Republican leadership intending to push the bill straight through to DeSantis. Many of the arguments heard were incredibly damaging, misleading, and wrong.

Republican Sen. Dennis Baxley argued that we should be concerned about how many children are coming out now. “Why is everybody now all about coming out when you are in school?” said Baxley. “There really is a dynamic of concern about how much of this are genuine type of experiences and how many of them are just kids trying on different kinds of things they hear about and different kinds of identities and experimenting.”

“That’s what kids do, you know,” Baxley continued. “All of the sudden we’re having all these issues come up about this topic of their sexuality and gender. I don’t understand why that’s such a big wave right now.” Baxley supposed that some of it may be a cultural shift, but asserted that some of it is “confusion kids go through, particularly when you go to middle school and high school.”

Last weekend Gov. DeSantis’ press secretary Christina Pushaw horrifyingly equated opposition to the bill to an endorsement for grooming. “If you’re against the Anti-Grooming Bill, you are probably a groomer or at least you don’t denounce the grooming of 4-8-year-old children,” she posted on Twitter. “Silence is complicity. This is how it works, Democrats, and I didn’t make the rules.” These claims were refuted by Senator Baxley.

The bill that liberals inaccurately call “Don’t Say Gay” would be more accurately described as an Anti-Grooming Bill.

Worse again were the arguments made by Republican Sen. Ileana Garcia, where she seemed incapable of understanding the differences between gender identity and sexuality. She spoke of a “very good trans friend” who went through the process of transitioning at 58 years old. “Guess what? [She] still likes women,” she said, misgendered her supposed friend and failing to explain how that has any bearing on her friend’s gender identity.

At the same time, LGBTQ+ students, parents, and allies have been tirelessly protesting the bill. Students across Florida have organized class walkouts, with others heading to the state captital to chant “we say gay,” ensuring their voices were heard. Democratic Sen. Shevrin Jones, Florida’s first out senator, praised students for coming out at a younger age than he did. “I don’t think y’all understand how much courage it takes to show up every day,” Jones said.

Students are up at Floridas state cap demanding the legislature not pass the Dont Say Gay Bill.

Here they are chanting “we say gay” with many Republicans trying to act like they can’t hear them.

Furthermore, LGBTQ+ rights group, Equality Florida has been outspoken against this bill. After the bill passed the Senate the group tweeted that they “will lead legal action against the State of Florida to challenge this bigoted legislation.” They continued saying they will not “sit by and allow the governor’s office to call us pedophiles. We will not allow this bill to harm LGBTQ Floridians.” Equality Florida also said that they “will not permit any school to enforce this in a way that endangers the safety of children.” They also shared a reminder that the best way to hold lawmakers accountable is at the ballot box.

Let us be clear: should the vague language of this bill be interpreted in any way that causes harm to a single child, teacher, or family, we will lead legal action against the State of Florida to challenge this bigoted legislation. https://t.co/pvGSJ4iMMP

Nevertheless, the bill is in DeSantis’ hands now, and the Governor seems likely to sign it.