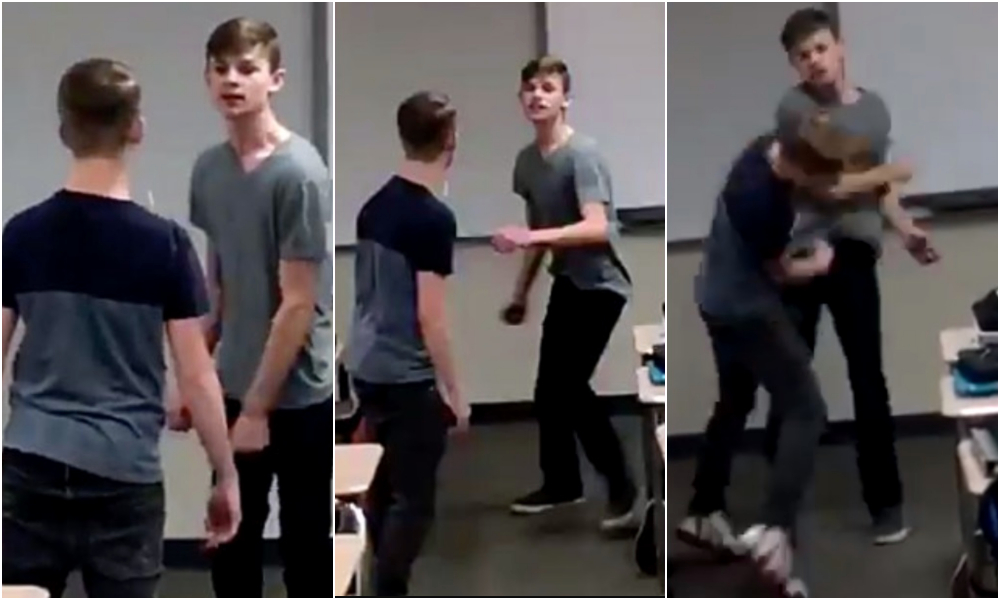 This bullied gay teen is done being tormented.

High school student Jordan Steffy clapped back against a classmate who had been teasing him and calling him a “f****t” since the second grade.

The altercation took place at Laporte High School in La Porte, Indiana. Two clips of the argument surfaced online and have been viewed more than 10 million times.

“Don’t f**king put your hands on me f****t,” the bully replied, approaching Steffy.

This is the fight 😶 pic.twitter.com/DAsehv9I4m

Steffy told Insider he came out in seventh grade and has endured bullying from homophobic peers ever since. He said the boy he fought in the class had posted a homophobic note on Snapchat with his photo on it, and he was fed up:

“He made an anti-gay post with a picture of me on it saying how he hated gays and a bunch of throwing up emojis all over it. I walked up to him and said, ‘Why did you post this?’ He said, ‘It was just a post.’ And I said ‘Well, it’s not just a post. It’s a post about me, saying how you dislike who I am, and I don’t appreciate that.’ He went on to say, ‘Okay, but what are you going to do about it?’ I said, ‘I’m not going to deal with this, this is the last time I’m called anything.’ And then he said ‘What are you going to do about it, f****t?’ And that’s when I was like ‘No, I’m not doing this.'”

Replying to Twitter users after the clips went viral, Steffy said, “I honestly was just looking for an apology, but he acted like it was no big deal, and that has been the word to define me since 2nd grade.”

He also thanked the people who have shown him support: “I really can’t believe people are around to tell me that it was okay to stick up for myself!”