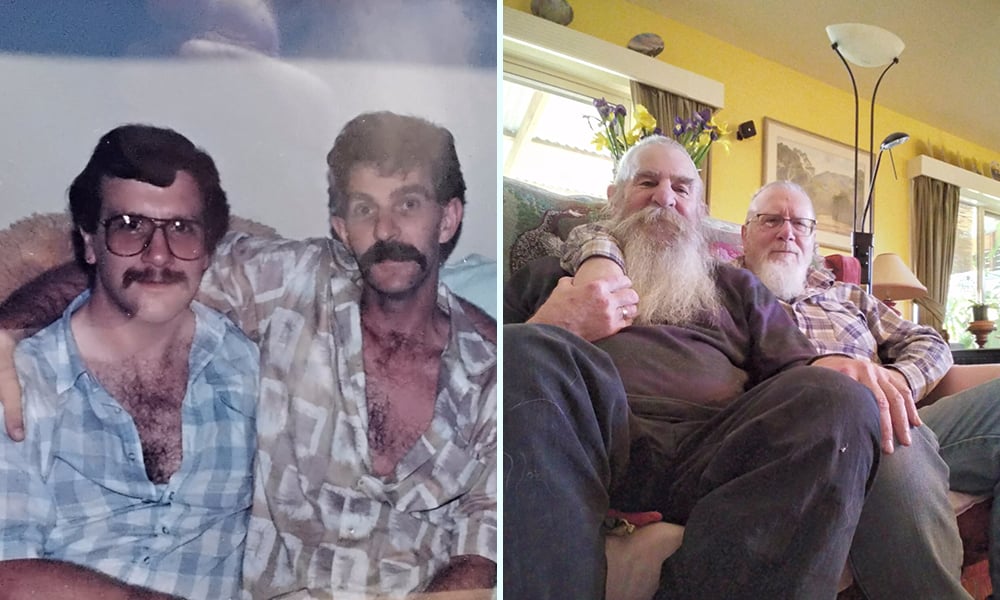 7 Gay Couples Pictured Then And Now

If there is a better example that being gay is not a phase, I’d like to see it.

Long-term same-sex relationships should come as no surprise to LGBTQ+ folks. The idea that our relationships are built on the same foundations of love and trust is as plain as day. If that’s the case, why do pictures of gay couples, recreated decades later, so often trend online?

The answer is likely a combination of factors. A long history of homophobia relegated such love stories to the margins of society. We also can’t ignore the enduring impact of HIV on our community. So many relationships were cut short; entire friend groups were wiped clean.

Despite it all, gay couples endured. They held one another at the funerals of their loved ones. Celebrated anniversaries as the state refused to consign their relationships. Built lives together as the world around them tried to tear them down.

To celebrate them, we’ve collected some examples of enduring gay love.

Peter and Murray went viral on Twitter after sharing a photo of themselves 35 years ago compared to a recent photo of themselves. The tweet, which was shared last year, accrued over 300,000 likes. The couple just shared their 36th anniversary.

35 Years ago I met this amazing man. Love him even more today. pic.twitter.com/63o5gusCAn

“The beginning of a dream,” wrote Marinho on Twitter. “Everything went right for us.” The couple is pictured on the left in 1996, and 24 years later still enjoying madly in love. The Brasilian couple has been married all this time, and according to Marinho, they are still satisfied.

In case you haven’t seen these iconic photos, Cardello and English famously recreated their kissing image in 2017. The couple is pictured at the 1993 LGBT March on Washington, and again at DC’s Equality March on June 11, 2017.

If you’re looking for famous examples of long-term same-sex relationships, look no further than Amsterdam’s first-ever same-sex marriages in 2001. Among the four couples were Gert Kasteel and Dolf Pasker, who celebrated their 20th-anniversary last year. “If getting old is given to us, we will get old together,” said Gert.

All four marriages stood the test of time. They are, from right to left, Gert Kasteel and Dolf Pasker.

Also among the couples were Hélène Faasen and Anne-Marie Thus. In face, Hélène and Anne-Marie were the very first lesbian couple in the world to legally marry. The couple raised two kids through puberty, and are still going strong.

Ton Jansen and Louis Rogmans met on November 6, 1965, and married 35 years later. The couple who met at a social salon for queers is pictured here after 56 years of being together. Now that is one for the books.

Michael and Jack applied for a marriage license in 1971 in Blue Earth County, Minnesota. The duo figured out a clever loophole in the system and it very nearly paid off. Jack changed histo”Pat Lyn,” in an effort to fly under the radar. It worked, at first, until of course it was discovered that they were both men. Nearly five decades later the couple received a letter from the Social Security Administration officially validating their marriage.

Michael and Jack McConnell, 1970 and 2019. Thought to be the longest-married, same-sex couple in the U.S.

These are just some examples of gay couples in love then and now, but it doesn’t have to end there. Help us grow this list. If you’ve been in a gay relationship for 20+ years and would like to be featured, email us at [email protected] with a picture of you then and now.

7 Gay Couples Pictured Then And Now