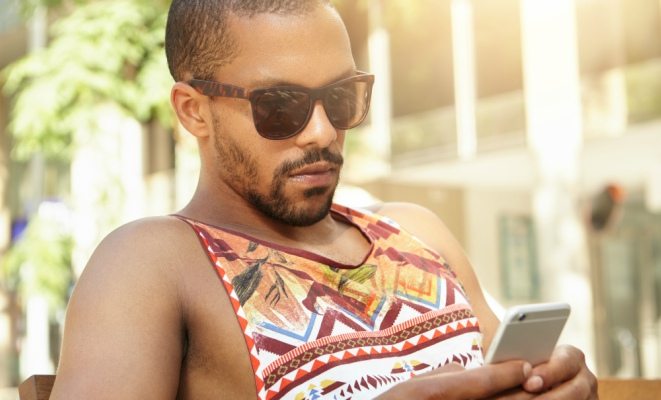 According to a 2014 study by security software firm McAfee, 49 percent of people with phones send or receive sexual content via video, photo, e-mail or messaging — that’s a lot of dick pics! While 77 percent of them are sending these pics to their significant other, 16 percent are sending them to complete strangers.

Men between 18 and 24 are the biggest sexters out there, but nearly 61 percent of males in all age groups send sexual content via photos or video. What gives us the hutzpah to send countless images of our ding-dongs to other people?

We’re visual creatures (duh!). Gay guys on Grindr won’t dare send you a second message without knowing for sure you are who you say you are. Face pics, dick pics, ass pics, they need to know you’re not catfishing them. But little do we know that 50 percent of all people receiving nude pics save them to their device, according to the study.

The people at NYMag recently asked men why they choose to Snapchat their dicks to spouses and strangers alike, and their responses might surprise you:

“I personally am an advocate of the dick pic, because women who want them are usually a little extra cray-cray in the sack. Being told by a woman that she touches herself to a photograph of your uncircumcised schlong is a huge turn-on and lets you know they’re probably on the lower end of the self-esteem spectrum. Nothing more arousing than that. Any fella who says otherwise is totally lying!” — Jason, 24, salesman

“For me, dick pics are the ultimate sign of confidence. It’s important to let a girl know exactly how ready I would be in a situation where she would need me to be naked. When all the hints of my desperation have been sent verbally or in text, the logical next move is the dick pic. My move used to be done purely in person: Get half-erect, involve my dick into the conversation somehow, and then urge her to feel it, under the guise of it being almost scientific to do so. But the dick pic is like sending a résumé or even putting up a ‘now hiring’ sign. No more having to unsexualize my dick with a half chub and sweatpants to make her aware of what I’m packing, so thank god for my Droid.” — Ryan, 27, cook

“Dick pics in the straight world seem to offend at an alarming rate. In gay circles and/or networks and/or apps, not only is the dick pic a courtesy, many decide to skip the dick pic altogether and go for the asshole pic, a starfish selfie. Some dicks are deal-breakers while others seal the deal in a few seconds. A picture is worth a thousand words, and we are living in a world of Twitter-length messaging. Get to the point.” — Michael, 39, videographer

“If you’re going to sext with a lady and she shows you a nipple, you have no choice but to send a dick pic. You can’t send a nipple pic back or a ball shot, you gotta get your pecker ready for the spotlight. I like dick pics cause the camera makes your wang look bigger. Plain and simple. Take a few, narrow it down to the top three, and send away. Save the good ones to use later, you never know when you might have to send one out when your current dick state is not up to par.” — Mike, 25, waiter

“God bless the dick pic! My very close straight girlfriend regularly sends me the photos she receives from her conquests, so I reap the rewards too. She’s become a size queen over the years, so it’s a win-win for us. But it’s for that reason that I do not share photos of my junk. Call me old-school, but there’s still some charm left in letting someone have an extended glance in a bathroom urinal. I did, however, send out a picture of my peen in 2000 — the days of dial-up internet and AOL. I was 18 and wanted a critique of my package. This was snapped with an external webcam, remember those? It wasn’t a size issue, I’m fine with that, I just wanted someone’s opinion (this was before Snapchat, obvs). I sent it to two gay friends.” — Charlie, 33, writer

“Most of my recent relationships have been from online dating sites. Most initial interactions are by phone and text. If the conversation gets sexual, it feels natural at times to give the girl a visual of my arousal. I’ve never dick-bombed anyone. She always knows it’s coming, and half the time is the one requesting it.” — Anthony, 37, baker

“I send dick pics because — at the risk of sounding cocky (heh, heh) — I have a truly beautiful dick. In a world of tragic penises, I have a stun-gun of a phallus. Women who don’t even like me have slept with me and said, ‘You’re kind of an asshole … but damn that’s a nice dick.’ One time, a girlfriend I was living with applied for a bartending job. I knew the gay manager from another bar he worked at years before. I had his number and sent him a pic of my cock. My girlfriend got the job. My dick helped pay the rent.” — Kevin, 50, comedian

“There’s little explanation beyond this: I do it because I have to if I want sex. In the gay world, a dick pic is the equivalent of small talk, especially on any sort of sex app. There’s usually a hello, a few back-and-forths before showing your dick is the expected next step. At this point, dick pics aren’t exciting anymore. I don’t even try to take good ones myself because it just doesn’t matter — they’re more of a sign you’re breathing than any real barometer of whether a dude will have sex with you.” — Tanner, 32, marketing