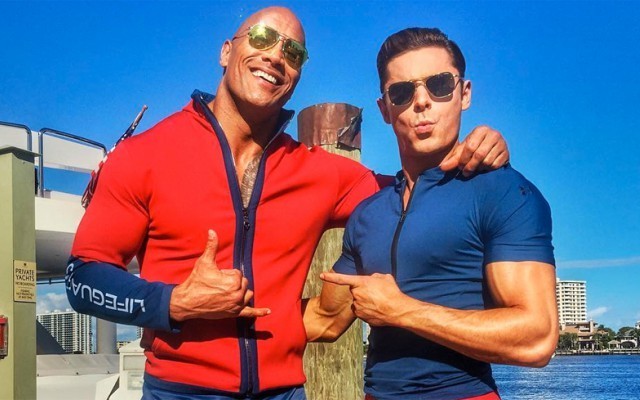 Obviously, Zac Efron is busy guy (how could he not be? Those muscles are legit). When he’s not pumping iron, humping stuffed animals or showing off his handsome peen, the ex-Disney stud is on sets making movies.

Efron and The Rock star in the upcoming Baywatch reboot, and they’re both looking ridiculously buff. While we wish Efron sported a Speedo for this flick, his baggy board shorts and tight rash guard show off his bulging biceps perfectly.

The greatest of cinematic teams always start off with conflict – which is why my character can't stand this prick. And he hates me too. ???But we share one common goal: Protect the Bay. #BAYWATCH #Rescue2 #WaitTilYouSeeRescue1 #OceanOGs

The Rock posted a photo of the duo on his Instagram account with a cleve caption: “My character ‘Mitch Buchannon’ just gave @zacefron’s character ‘Matt Brody’ the all important beach speech about what it means to have manly ‘Alpha Balls’.”

EXCLUSIVE FIRST LOOK: #BAYWATCH Day 1. My character "Mitch Buchannon" just gave @zacefron's character "Matt Brody" the all important beach speech about what it means to have manly "Alpha balls". Zac's ad-libbed responses were brilliant! Talented and great dude. World get ready to have some fun, 'cause the beach will never be the same again. #OnSet #BAYWATCH #Day1 #AlphaBalls #NowWhoNeedsMouthToMouth??

With all the time Efron’s spending at the gym, we hope he has at least one Speedo scene. How else would we see his veiny … muscle.