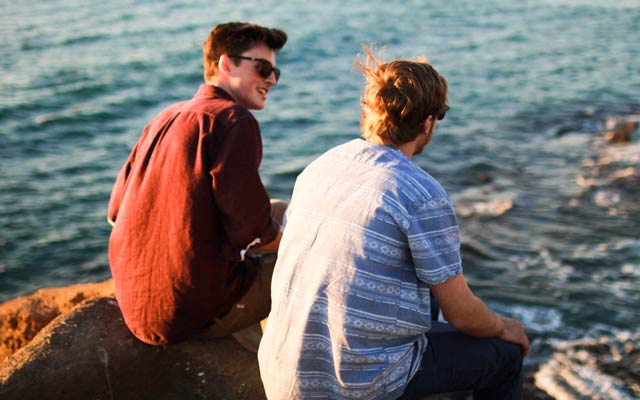 Which Traits Are Gay Men Attracted to Most

We all have different types, but when push comes to shove, is there an absolute type all gay guys find attractive?

On a human level, people in general connect soul-to-soul, not penis-to-penis. Sexual attraction can be conniving. If we’re not careful, it will convince us we’re in love with someone even if we’re not. It stimulates our impulse — not our hearts.

We’re human, and physical traits matter a lot when we’re sizing up a likely candidate. But my question is: What is “hot”? What does it mean? What makes my smile different from someone else’s? After doing a bit of research, I’ve found studies that show exactly what gay men find most attractive on each other.

Related: How to Get Laid on the First Date

Thanks to a survey by CofeeMeetsBagel.com, we know that gay guys are super visual and care a lot about the physicality of a man’s body — duh!!

In fact, 92 percent of gay guys said getting in shape would strongly improve their dating lives, while 90 percent admitted to have getting in shape solely for the purpose of looking better for other guys.

However, 18 percent said getting in shape made no difference in their dating lives, while 37 percent said it gave them confidence for them to ask more people out. This is all good, but what body parts did gay guys find sexiest? They are:

Having a broad jaw, broad forehead and a more pronounced brow ridge ended up being more attractive than softer, more feminine, ones, according to a 2009 Harvard study.

Whether you were gay or straight, men in general prefer high sexual dimorphism in the faces of the sex they are attracted to. Meaning, if you’re gay, the more masculine the face the stronger the appeal. But if you’re straight: the more feminine the face the stronger the appeal. Gay and straight males did not agree on the types of male faces they consider attracted, proving the dimorphism theory correct.

While the 5 o’clock shadow might be an acceptable look nowadays, especially for those of us who like a slightly hairy look, the smooth face is still the sexiest, according to a study by Pace University.

Related: How to Quit Grindr for Good

They found that 60 – 70 percent of gay men (and straight women) are attracted to a smooth face. More than half find a full beard to be a major turn off. Goatees and mustaches also didn’t show favorable numbers. Sorry all you pornstache-wearing lumberjacks!

Hygiene is more than just manscaping or scrubbing ourselves with soap. Over all, it has to do with lifestyle and how we incorporate it into our daily routines. One study called Singles in America admitted to judging their dates on 3 factors: teeth, confidence and grammar.

Teeth shows health and age, confidence shows psychological stability, and grammar shows background. If they’re all on point, we will always up our game.

While 22 percent of gay guys said in a Match.com survey that they’d rather have a partner who was more athletic than themselves, 48 percent of them also said they fell in love with someone they didn’t initially find attractive.

65 percent of gay men also claim to believe in love at first sight. We all want connection. When a man isn’t trying to impress the world, they become more emotionally accessible. It’s less intimidating and more vulnerable, which gives the world permission to connect, rather than pushing them away.

It’s the difference between being eye candy and being appealing: eye candy turns us on sexually, but it only lasts until another candy comes along. Appeal lasts longer, way after the person leaves the room. Trust me, no one wants to marry eye-candy.

Which Traits Are Gay Men Attracted to Most