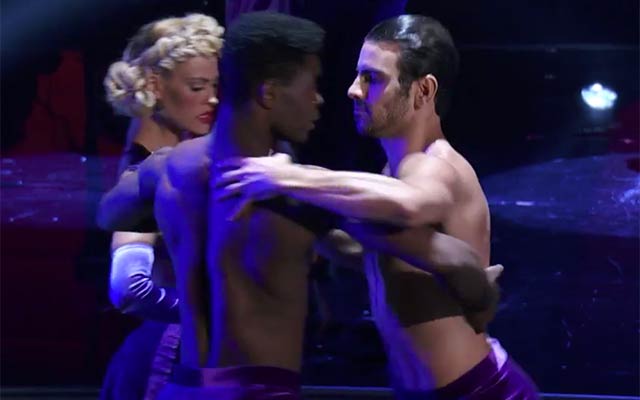 America’s Next Top Model winner Nyle DiMarco is sexually fluid, and we love him that way because he brought it to the dance floor of ABC’s Dancing with the Stars Monday night, and let me tell you it was a sight to see.The dance was part of the Judge’s Team-Up Challenge in which two stars are paired together and coached by one of the show’s three judges (which could be good or bad).

DiMarco and his partner Peta Murgatroyd were paired with actress Jodie Sweetin and her partner Keo Motsepe, coached by the hilarious Judge Bruno Tonioli. At first, it started as a classic dance to “Hababera,” but it soon developed into a same-sex explosion of hotness all over the dance floor, with DiMarco and Motsepe’s bulging muscles stealing the limelight.

“This is a Dancing with the Stars first, having same-sex dancing,” DiMarco said. “[Being lifted] is a different experience. Usually I’m lifting Peta, but … should it only be for a woman? Maybe Peta can life me at some point?”

Anytime DiMarco is being lifted off the ground is a hell of a good night on television. He seems to enjoy it, too. Check it out his twinkle toes!