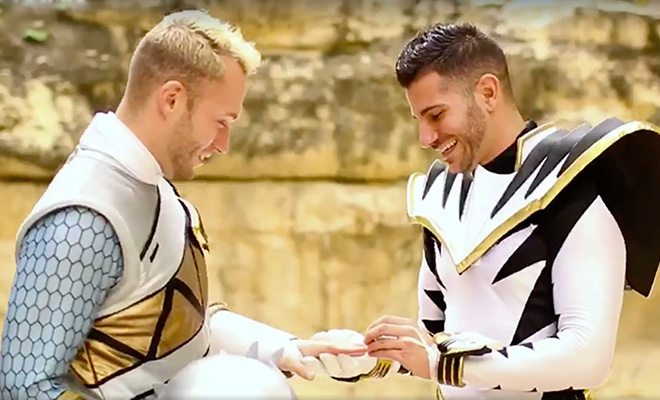 Even if you’re not a 90s kid, you’ve probably seen an episode or two of Mighty Morphin Power Rangers (MMPR). Cosplaying boyfriends James Reese and Anthony Grillo have rocked some over-the-top MMPR costumes, so naturally, their engagement video is out of this world.

James posted the “morphinominal” video, which was shot by Kevin Bianchi, to his Facebook page and fans of the show gravitated to it quickly. So far, the two-minute video has 1.7k reactions, 360 Comments, 1.2k Shares and 64k Views. To accompany the video, James composed a heartfelt note announcing their engagement.

Watch the adorable video below!

“You guys know that Anthony and I never do anything mediocre, we always have to be over-the-top! So, with that said, he had to make sure that the next step in our lives was more than special, it had to more Morphinominal! Anthony got down on one knee, in his Ranger suit to ask me to be his forever Ranger! Today, we are announcement our engagement! I said yes! Rangers Together, Love Forever!”