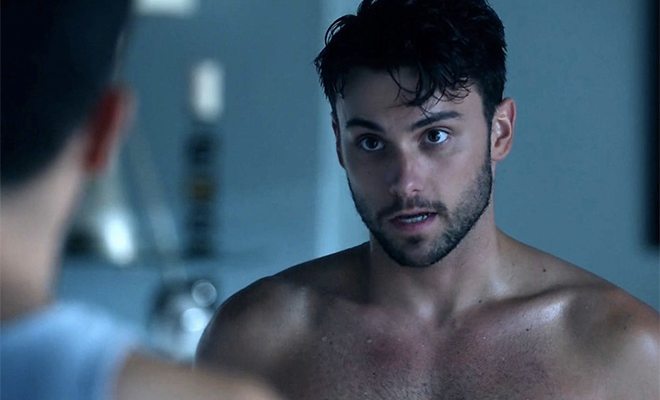 Jack Falahee set the record straight on his sexuality and promised to stand up for LGBTQ rights.

The 27-year-old How to Get Away With Murder star took to Twitter to talk about the election results and his sexuality. Falahee, who plays gay on HTGAWM, had previously avoided discussing his sexual orientation.

He cited a gay friend as his inspiration for talking about his sexuality openly. He then went on to discuss his plan to become a more active ally to the LGBT community.

(1/2) sorry for the small font, but I wanted you all to read this. pic.twitter.com/9BAKHJMTdJ

Although some fans will be disappointed and could accuse Falahee of being a gay-baiter, it’s comforting to know we have another ally in Hollywood.

You can read his letter in its entirety below.

In the past I’ve declined to discuss my own sexuality in an attempt to try and dismantle the closet. Opponents to my ambiguous answers to questions surrounding my sexuality argued the importance of visibility. Ultimately, I think that my stance has been unhelpful in the fight for equality. I Feel that I’ve sacrificed my ability to support the community for a more theoretical discussion about sexuality. Now more than ever, I want to offer my support to the community as an ally.

I spent election night with a few of my close friends, glued to the television. My friends drank more heavily as the night progressed while I ate more and more ice cream, having chosen the worst possible week to take a break from booze. By the end of the night a friend of mine, who is gay, was sitting on the floor under a table crying. Exhausted by a campaign fueled by bigotry and hate, he couldn’t face the reality of the next four years. he had every right to be afraid. We now have a VP who believes in conversion therapy, that homosexuality is a choice and that marriage equality will lead to societal collapse. We have a VP who doesn’t believe that my friend should have the same rights as me, and that’s scary. I didn’t go sit with him under the table. I, too, was horrified by the results that night and left the viewing party dejected and angry but unlike my friend, I would be ok.

While I’m not gay, on HTGAWM I play a character who’s in an interracial relationship with an HIV positive man. However, in the past I’ve declined to discuss my own sexuality in an attempt to try and dismantle the closet. Opponents to my ambiguous answers to questions surrounding my sexuality argued the importance of visibility. Ultimately I think that my stance has been unhelpful in the fight for equality. U feed that I’ve sacrificed my ability to support the community for a more theoretical discussion about sexuality. Now more than ever, I want to offer my support to the community as an ally.

Over the past few days since the election I’ve spoken with LGBTQ friends, along with women, POC, and the Jewish and Muslim folks in my life. I began to receive messages from fans from all over the country and world saying that they were scared for their lives. Meanwhile, my newsfeed and timeline have been filled with stories of how these same groups of people have been targets of discrimination and violence since the results of the election were announced. This is not new. it’s only been exasperated by this election cycle.

Through all of this, I’ve been inspired, too. I’ve seen my friends march in NYC and LA. I’ve spoken with my 16-year-old cousin in Michigan who, despite how everything turned out, has chosen to stand even taller to fight for what is right and has engaged in positive discourse with the boys at her high school that “joke” about repealing the 19th Amendment. On social, and in person, I’ve seen my castmates, friends and family work tirelessly to communicate through our nation’s divisiveness. I’ve seen folks, made infinitely more vulnerable than I by these results, take decisive and concrete action toward a better future for all. I want to do the same.

So here are some things I’m going to do and hopefully you might join me:

1. Educate: I’m going to become more informed about our political system and its shortcomings. I’m going to read more about social equality and how I can help achieve it.

2. Engage: I’m going to engage in local elections and actions. I intend to participate in direct action more than once every 4 years.

3. Support: I will certainly mess this one up but I hope to support the LGBTQ community, as well as the other communities jeopardized by this election, to the best of my ability. This includes giving my time, money and body in support. As allies, I believe we have a duty to stand up to discrimination and hate.

5. Donate: I’m going to set up monthly donations to a variety of statewide and nationwide organizations that help protect the rights of those threatened by the new President Elect. Some charities I’ve chosen:
The Trevor Project – nonprofit focused on LGBTQ suicide prevention
Equality California – nation’s largest LGBTQ civil rights organization
ACLU – works to defend individual rights and liberties guaranteed by the Constitution
Southern Poverty Law Center – works to protect best interest of children who come to US on their own
Planned Parenthood – country’s leading sexual and reproductive health care provider

Now, I’m going to go call that friend who was crying on the floor.