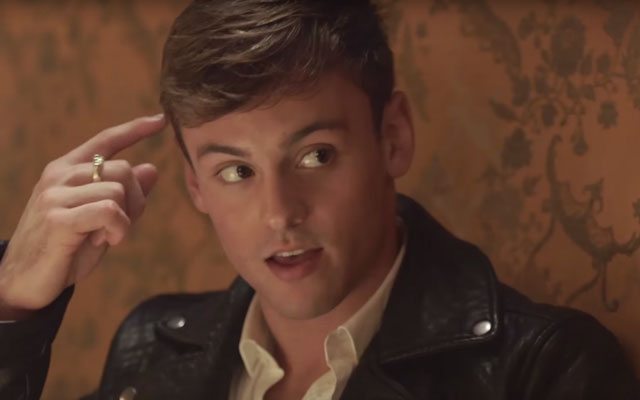 This year, the Summer Olympics host more openly queer athletes in history, and among them, Tom Daley often stands in the spotlight. In a few hours, the 22-year-old diver will compete for a chance at Olympic gold in the men’s synchronized ten-meter platform event.

Stepping away from his intense training regime, Daley sat down with British GQ for an interview in which he talked about his fiancé Dustin Lance Black, coming out, and having sex in the Olympic Village.

Related: New Documentary Lets You Dive In to the Life of Tom Daley

On his lucky monkey:

“I’ve got a lucky monkey. I’ve had it since I was 9 years old. At Beijing 2008, lucky monkey would be sat next to me, and it would always have to face the diving boards to watch me. And that was like a bit of a ritual I had.”

“They follow you to the loo. You have to put your trousers down to your knees, your t-shirt up to your chest, spin around 360, and they have to watch it come out.”

“December 2, 2013. That was when people told me not to do it and that it would end my career for sponsorship. It’s not like I was in the entertainment industry. I was in the sport industry, and who wants to sponsor a gay athlete? The big fear I had was the public perception. Would people then all of the sudden hate me? You always build it up to be the worst thing or the end of the world, and actually, it was fine. I guess one of my biggest fears was being known as the gay diver. I didn’t want to be known as ‘the gay diver.’ And the one thing I think now that I’m pretty happy and proud about is that I’ve never once been called ‘the gay diver.’”

On sex at the Olympics (print):

“You’ve got hundreds of athletes crammed into student accommodation. They are in peak physical condition and have been locked away training for months — talk about a need for release. Let’s just say the sex is … Olympic.”

GQ Features Director Jonathan Heaf met with Daley for lunch at a gourmet Chinese restaurant at Park Chinois. You can watch the video below.