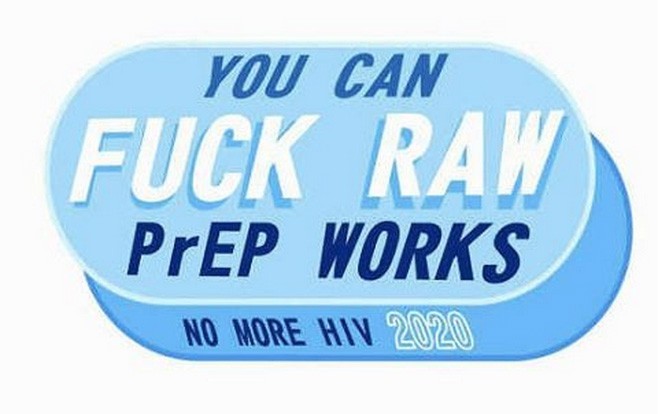 This PrEP campaign encourages gay men to ditch protection with the most intense message ever.

The message reads “You can f*ck raw. PrEP works – no more HIV.” And, it’s absolutely right. Truvada, one of the leading HIV prevention medications, works and there are a plethora of recent studies to prove its effectiveness.

SEEITCLEARLY2020 developed the campaign and released a press release to address their shocking message:

“PrEP isn’t about giving gay men a license to ‘f*ck raw’, it’s about putting them in control of their sexual health by ensuring that they have the tools they need to stay HIV negative. It’s also about breaking down the barriers between positive and negative men, reducing anxiety about HIV, and challenging stigma.

While we have concerns about the appropriateness of the messages conveyed by this campaign, we think it shows the level of interest in and demand for more effective HIV prevention in our community.

And though I am not sure that having a discussion about PrEP on the streets of Melbourne is the best place, it’s pretty clear that we cannot ignore this call to action, and we have no desire to silence those who rightly demand access to lifesaving forms of proven HIV prevention. Both state and federal governments should consider their own capacity to act and make PrEP available.”

Here are a few of See It Clearly 2020‘s Instagram photos: