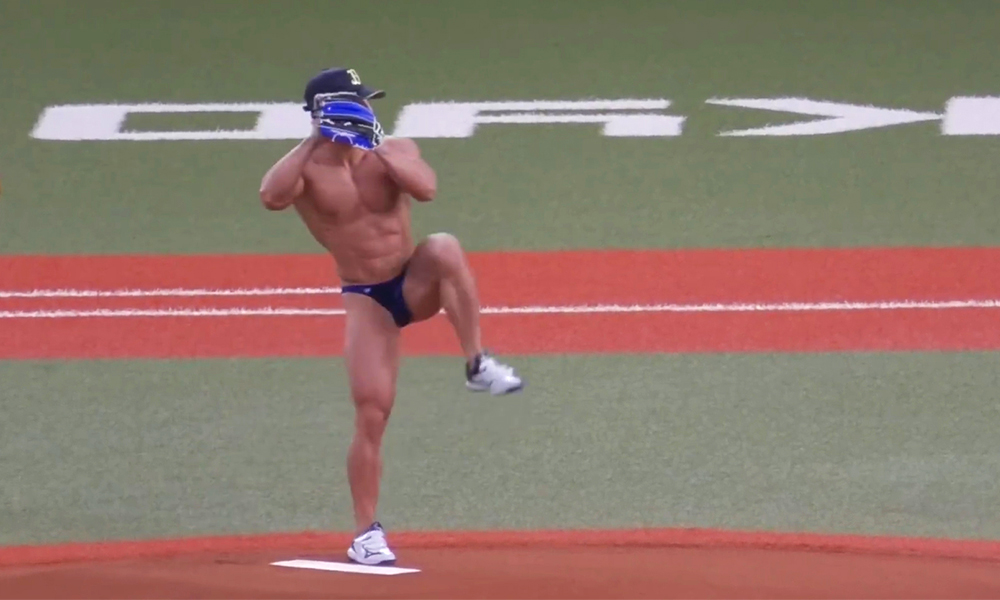 This Japanese Bodybuilder Stripped Down to Pitch

The universe keeps telling us to watch baseball, and it’s about time that we listen. This time we’re talking about Japanese baseball. If you didn’t already know, Japan takes baseball very seriously. The sport was introduced to Japan in 1872 and is the country’s most popular participatory and spectator sport. They also participate in the time-honored tradition of inviting a special guest to pitch. Sometimes that guest is extra special. Hunky bodybuilder Naotaka Yokokawa stripped down to throw the first pitch at a recent game between the Orix Buffaloes and the Fukuoka SoftBank Hawks.

Related | This Pro Catcher’s Butt Takes Pitches Like a Champ

Naotaka Yokokawa is a 28-year-old, Tokyo-born bodybuilder who even has some bodybuilding awards under his belt. Among these is his 2019 win at the JBBF All Japan Bodybuilding Championship. Yokokawa walked onto the field wearing an Orix Buffaloes jersey, shorts, and cap. He bowed to the crowd before jogging onto the pitching mound while holding gold-colored dumbbells. The lyrics to Macho Man by the Village People rang out throughout the stadium, so you just knew this was going to be good.

Yokokawa then proceeded to get his kit off, to the surprise of the audience. First his shirt, then his shorts, leaving only a dark purple thong and his Orix Buffaloes cap. He then took the opportunity to do what he does best and flex for the crowd, who responded by applauding respectfully.

When Yokokawa grabbed the mitt and chalked his hands, he was playing out a dream scenario. “I love baseball,” he wrote on Instagram saying it was “a dream come true.” The pitch itself went quite a bit wide, but luckily Yokokawa had fun regardless. “It would have been cool to have a strike,” said the 28-year-old, “but it would be Naotaka Yokokawa who would end up with a big wild pitch.”

Check out the video of the pitch below.

This Japanese Bodybuilder Stripped Down to Pitch