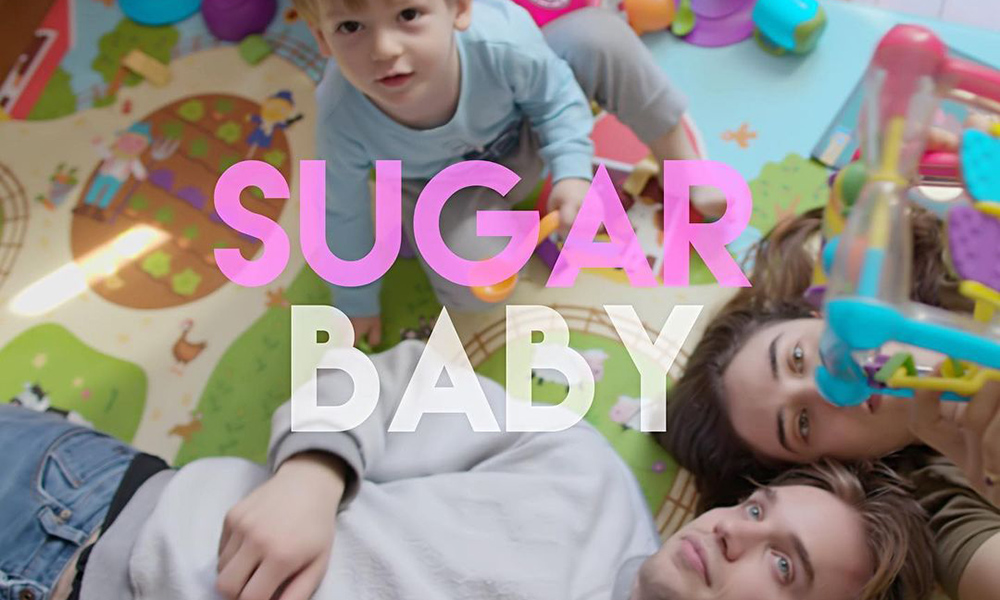 Drew and Lola are two self-absorbed 20 somethings who are trying to make a name for themselves in the Big Apple in a new YouTube web series, “Sugar Baby.”

The series follows the ups and downs of Drew, a gay stand-up comedian, and Lola, his best friend who is trying to create a successful baby vlog, as they struggle to be responsible adults. Oh, and did I mention they are also raising a baby?

It’s comic, eccentric, honest, and the perfect watch for those who are scrambling to figure out how to thrive in life and adulthood in your 20’s.

Gayety caught up with Drew Lausch, the executive producer, scriptwriter, and star in the series, on how he came to create “Sugar Baby” and why the coming-of-age series is important in the current era of media.

Tell me a little bit about yourself and your own story before you started creating the web series.  Well, I’m Drew. I grew up in Fargo, North Dakota, gay, which was an absolute *dream*. I then went to college in upstate New York for Musical Theatre, another *dream.*  I worked in musical theatre for a while after college but injured my back playing a magic carpet (my costume was a chic sleeping bag and it turns out you can’t backflip in those.) After that, I moved to New York City to pursue stand-up comedy. I produced a few live shows and then started writing down some ideas for a series based on my friendships.

Where did the idea for “Sugar Baby” come from? I’ve had so many close female friendships in my life that have helped shape who I am today. Whenever I’ve been in these relationships, especially when I was younger, I found them to be very codependent but also healthy (ish). It made me ask the question, “What if me and my girlfriend had a kid together? Or raised one together?” That always seemed like a better idea than trying to find a boyfriend (exhausting venture).

How closely does the web series mirror your own experiences? It does and it doesn’t. The relationships between Drew, Lola, and Hannah are loosely based on my friendships with a few folks in real life, and the real-life gals and I HAVE gotten pretty wild. Besides the characters, we actually got to shoot the stand-up scene at West Side Comedy Club which is where I produced my first show ever entitled “Homo You Didn’t.” Some of the antics in the show have happened to me in real life, but everything is exaggerated and again, none of us are as awful as we appear in the series. I’ve also never nannied/ babysat but I’m actually pretty good with kids and I’d like to think I’d be a better nanny than the Drew in the series.

What made you decide to focus on a relationship between a gay man and a straight woman? I think it’s a really beautiful dynamic, and one I’ve had the pleasure of experiencing my whole life. My relationship with my best friend, Cora, has always inspired me to write. It’s a friendship that is so complex and messy but so fulfilling that I’ve always known I wanted to base a show-off of it. The story (although messy) is a love letter to an unconventional family and to friendships in general – and my friendships have been the greatest love stories of my life thus far.

What is your favorite part about writing the dynamic between Drew and Lola? While writing their scenes and dialogue, Ben and I would try to one-up who was the more awful of the two. The characters are so utterly flawed and narcissistic there’s like, nothing they won’t say or do to get ahead. I know that some of their shenanigans are hard to stomach, but the dynamic is hilarious to write. Lola Lorber is a comedic genius so writing something, and then having her improv off of it was a gift. Putting in a few moments of tenderness here and there was lovely to write and act as well.

How did you find yourself teamed up with Benjamin Schwartz? Ben actually cast me, Lola Lorber, and Hannah McKechnie (two of the stars in “Sugar Baby”) in an unreleased pilot he was producing. On set, Ben knew I was a stand up so he let me improv a lot and we just clicked. After we filmed this pilot, I sent him a version of the script entitled “Broke & Broken” or alternatively “Drew & Lola” and he responded with “needs work.” However, he was down to make it and suggested we add Jonah, his son, to the cast, and then it all kinda fell into place! I couldn’t have asked for a better partner on this series- he legit executive produced, directed, co-wrote, and did the cinematography for the entire project, like what???

What does this filming process for the series look like? It was a ride. We filmed Tuesdays and Wednesdays from February 20 of 2019 – July of 2019 with a few pickups afterward. We then edited the series with our fabulous editor Eric Vitale for about 9 months. A typical day of filming would be Lola and I (and the cast needed that day) showing up to Ben’s apartment (where we shot the series) around 8:30 a.m., go over lines/rehearse the scenes/ get mic’d up by the fabulous Chris Francia, &  film as many scenes with Jonah before he had to have lunch or a nap, and then continue filming without him. The shoot days typically went from 8:30 a.m.- 6 p.m. at night, and Ben and I would review footage afterward.

Why did you choose to produce short 5-10 minute episodes? I had always wanted to make a web series. I liked the idea of short-form content and it seemed like the smartest move to tackle wearing the writer,/producer/ actor hat for the first time on a project. The initial pitch to Ben was a 12-minute episode and as Ben and I continued to write these characters and episodes it just made the most sense.

What do you hope that viewers will take away from seeing these 20-something-year-olds try to navigate through life? Well, I hope people laugh!! I also think although these characters are toxic beyond, that everyone in the series (and in life) is just looking and stumbling toward their purpose. Or literally grasping at anything to “fulfill their life/ dreams.” But, none of us know what we’re doing. Or at least I don’t. and I hope there’s some solace in that and comfort in watching characters who make the worst decisions in trying to move forward into successful “adulthood.”

Anything else you want to add? Creating this show has been one of the greatest pleasures of my life and it was possible because Ben took a chance on me. The entire cast and crew – which consisted of Lola Lorber, Hannah Mckechnie, Jonah Schwartz, Dominique Allen Lawson, Camber Carpenter, Patrick Hamilton Roseanne Rubino, Chris Francia & Eric Vitale – were truly the dreamiest and the most down to get a little silly. Also, Brandy Schwartz, the true MVP of the project, graciously let us film for MONTHS in her home and I can’t thank her enough.

Watch episode one of the series here!