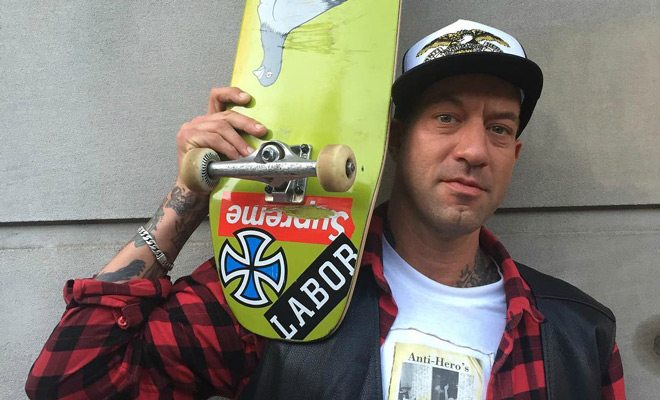 Brian Anderson is one of the most popular professional skateboarders in the world. In a recent documentary with Vice, the icon made a confession: He’s gay.

Anderson revealed that when he grew up, he had a crush on Bluto from the cartoon Popeye (he liked his facial hair). Admitting he isn’t attracted to the skateboarder look at all, he opens up about life hiding in the closet.

“Hearing faggot all the time at a young age made me think it was really dangerous to talk about,” he said. “I figured out how to balance it to where nobody questioned it. I was a big tough skateboarder. Nobody thought anything.”

The first person he told was his friend Peter who’d been staying with him from out of town. One day, he lied and said he was going to meet his sister. He went to go hook up with a guy in a downtown hotel. While he was hanging with his hook up, he ran into Peter. When Anderson got home, he came out, and that was the beginning.

The skateboarding community worships Brian Anderson as a god, but for many years kept his sexuality a secret from nearly everyone in his life. Our guy @giovannireda sat down with @nolimitsoldier and some of his closest friends to talk about being gay in the professional skateboarding industry and why he chose now to come out. Watch the full video on vicesports.com

“I started to get more guts as I achieve these awards,” he explained, “getting skater of the year, winning the world championship in Germany, all these things. I had all these achievements that nobody could ever take away from me.”

As he started to come out, the industry quickly noticed. Although most people knew he was interested in men, they vowed never say anything to the press or publically out of love for Anderson.

Anderson also talked about an incident in which he ran into a fan at a leather bar called The Eagle. The young fan called him out, “Yo B.A!” he shouted. Anderson grabbed him and pleaded, “Dude, if you ever say anything, seriously man, please. I’m just chilling out here doing my thing.” The fan was cool about it, but the world champion skater was a bit freaked out and decided not to go out as much.

But now Anderson is out and proud. He hopes that young people can learn from his story. He wants them to hear that there is a great life on the other side of the closet, that they will be much happier if they open themselves up and be who they are. Now that’s a hero.

Check out the Vice documentary below: