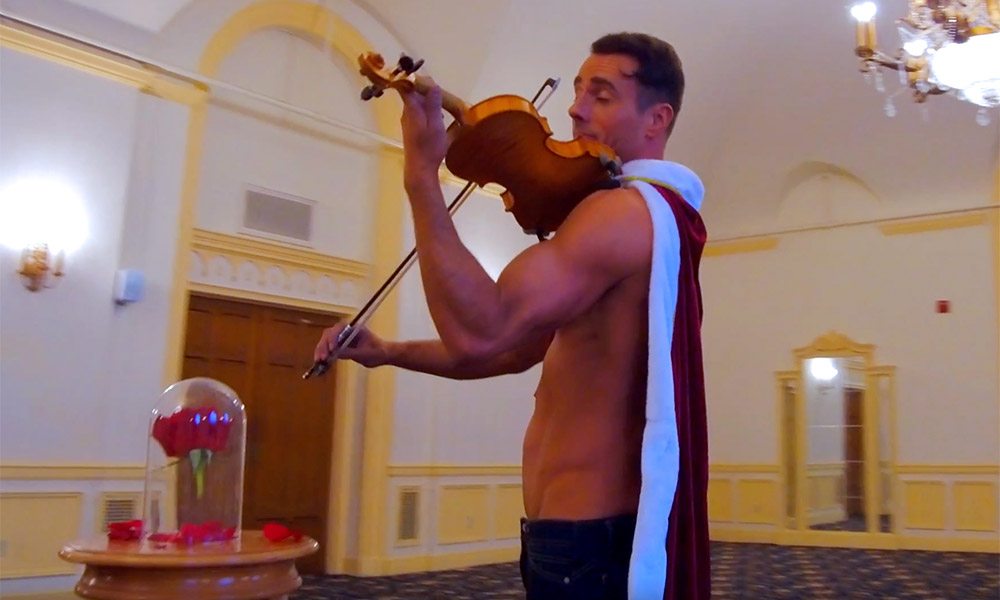 If you Like Gayety on Facebook, you have probably seen videos of Matthew Olson, better known as the Shirtless Violinist. Olson is an incredibly talented musician who shares his covers on YouTube, and he happens to be hot AF.

"You want me to do what???" ?Do I always look that intense on set? ? Taking instructions from my director. ? Music video coming out tomorrow morning 9AM!! ?? ??? #onset #musicvideo #music #dji #beautyandthebeast #ballroom

In Olson’s latest video, he covers the song “Beauty and the Beast” from the eponymous Disney classic. Although all of his videos are fun, this one is our favorite.

Olson explained the inspiration for the music video on YouTube. “My version of ‘Beauty and the Beast’ is a soaring, sweeping musical ‘retelling’ of the classic Disney fairy tale with an LGBTQ twist. When I first had the idea to cover ‘Beauty and the Beast’, I wanted to keep the video fairly simple. I envisioned myself (transformed as the Beast) with a beautiful dancer floating around me in a ballroom. No frills, no story, just a pretty song and some sweeping camera movements,” he writes.

In the video, a male-version of Belle, played by Olson’s real-life boyfriend, stumbles upon the violinist and instantly falls in love, and there’s a twist. “… When the ‘gay controversy’ erupted over the new live-action version of the film, it sparked another idea: What if, instead of a ballroom dancer, I asked a drag queen to perform with me?”

It’s a tale as old as time! Watch the enchanting video below.