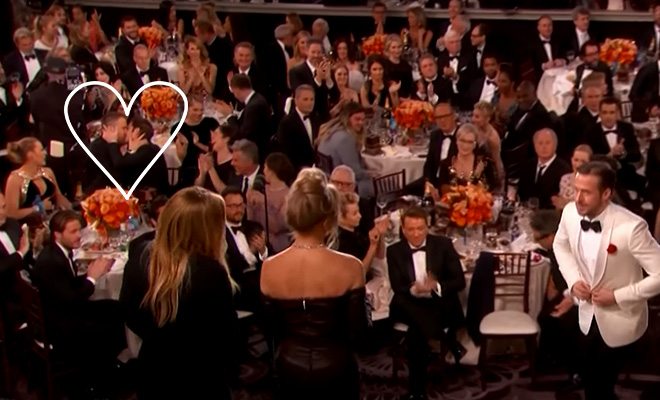 This year’s Golden Globes were interesting, to say the least. Meryl Streep delivered an incredible speech, and Julia Louis-Dreyfus showed off her DJ skills. Despite all the amazingness, the most memorable moment of the night stemmed from Ryan Reynolds and Andrew Garfield‘s table.

Moments after Goldie Hawn and Amy Schumer announced Ryan Gosling’s win for Musical or Comedy for his role in La La Land, the two actors, who lost to Gosling in the category, passionately locked lips.

Although Gosling didn’t see the smooch, viewers immediately noticed the makeout session and took to social media to express their excitement. Later that night, Gosling reviewed the footage during an interview alongside costar Emma Stone.

Gosling reacted with a smile saying, “I’m happy for them.” A shocked Stone said, “What? They did not kiss each other! They did?” Watch the hilarious interview below.