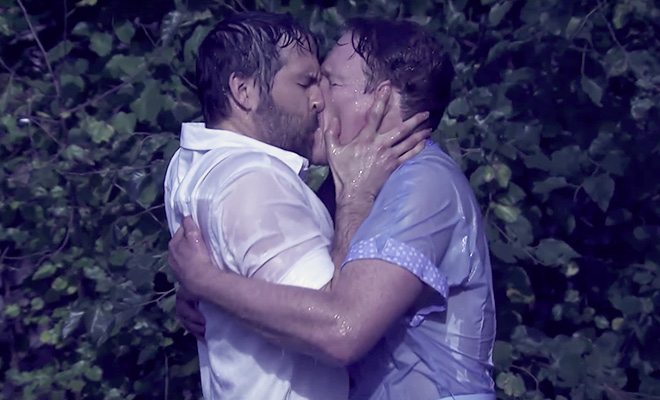 If Ryan Reynolds kisses you, you can bet it will be an incredibly long session with loads of petting.

Ryan Reynolds (aka daddy) made an appearance on Conan to talk about his three upcoming “projects.” First on the list of topics was his new underwear line made out of sliced ham followed by his forthcoming documentary Dolphins and How to Stop Them.

Lastly, the 40-year-old stud premiered a scene from his latest romantic drama The Notebook 2. Ok, so it’s obviously a parody, but that makeout session was hot enough to make anyone wet. In the scene, Reynolds reprises Ryan Gosling’s role and Conan channels Rachel McAdams in a baby blue dress and pearls.

After the episode had aired, Conan bragged about their intimate moment on Twitter, “I kissed Ryan Reynolds deeply in ‘The Notebook 2’ #ConanNYC #semiwood.”

Reynolds responded promptly saying, “Honestly, I can still taste him. I will never not taste him. #ConanNYC”.

Honestly, I can still taste him. I will never not taste him. #ConanNYC https://t.co/unZw9aW98C

Watch the interview below!