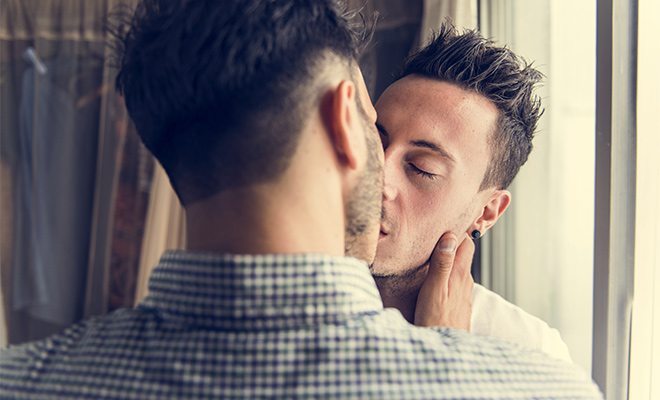 The Mormon Church says being gay is ok — butt sex is forbidden.

There’s something about Mormons that gets me hot — I don’t know if it’s the magic underwear or their collective “aw shucks” demeanor. However, no matter how much gay bait they throw my way, chances are I’m not getting lucky with a Mormon guy anytime soon.

The Church of Jesus Christ of Latter-day Saints recently launched a website called Mormon and Gay, which is an attempt to increase LGBT visibility within the religion. Despite their “positive” intentions, it’s a total shit show. The church welcomes gay, lesbian, bisexual, and transgender people to worship with them, as long as they never have same-sex sex again — that’s the rule.

The website contains videos of several gay Mormons, trying to convince everyone they’re ok with not having sex or being in a relationship that’s true to their soul. Check out Josh, who currently is choosing a life of celibacy:

“My middle to high-school years were very difficult as I tried to understand my gay feelings on my own,” Josh writes. “In fact, I couldn’t even admit to myself these attractions even though I was looking at gay pornography starting at age 12. When I started my freshman year in college, I changed my major from accounting to agriculture because I thought, People won’t think I’m gay if I’m in a more masculine major.”

Josh continued, “I began to explore my homosexuality by dating men. “For the first time, I understood why heterosexual couples fell in love and what that actually felt like. But deep down, spiritually, I felt God wanted something different for me, so I started the repentance process, and Church discipline followed.”

Another man, Ricardo, says he lived in shame all his life, which pressured him into finding love with a woman. However, regardless of his relationship, he was still disgusted with himself when they’d go on dates and he checked out other men:

“At times it was emotionally hard to be with my girlfriend at a public place and find some men attractive,” Ricardo explained. “I hated those feelings. I felt hopeless, unworthy of her and God. When my sweetheart and I started formalizing our relationship, I told her about my sexual abuse and my feelings for men. At the time, I didn’t have the words or the tools to explain effectively what I was feeling.”

“She said she was sad that I had to go through this alone,” he continued, “but it didn’t affect how she felt about me. However, she didn’t know to what extent my SSA had affected me. She said she loved me as I am, and the Spirit confirmed to her through personal revelation that I was the man she was to marry.”

Say what you want about Mormonism or any other religion, I’m not one to judge how you live your life, but at the end of the day you cannot argue with data.

John Dehlin, founder of the podcast Mormon Stories, spoke about the church’s outreach to gay people. “They’re acting like the most homophobic church in all of Christianity,” he said. “And yet they’re trying to send this double message that gays are welcome.”

As part of Dehlin’s research for his Ph.D., SF Gate reports, he conducted a survey of over 1,600 LGBT people who were currently or formerly Mormon. He found that two-thirds of them had left the church. Those who remained — that either ended up in heterosexual marriages or chose a life of celibacy — had high levels of depression and lower quality of life and self-esteem.

Clearly, if you decide to brainwash yourself, it’s obvious you will never be truly happy. There are so many other things in this world to be worried about, other than one’s attraction to the same gender. But, hey, who am I to say that what you believe in is wrong? Sometimes ignorance is bliss.