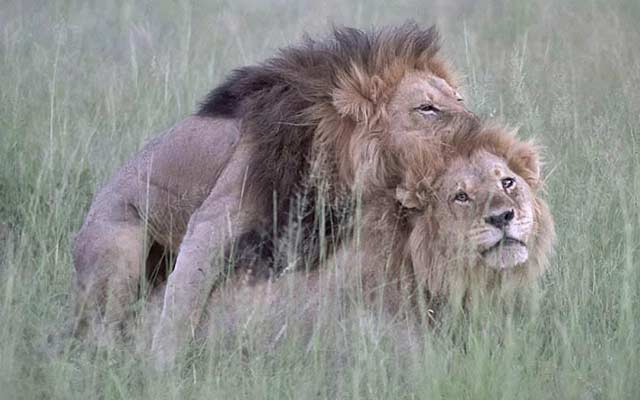 Talk about gay Pride — and they say homosexuality isn’t natural.A tourist on safari photographed two male lions doing (what looks like) the thing they’re supposed to be doing behind closed trees. Thank God for smart phones.

While totally ignoring nearby lionesses (can you imagine what they were thinking?), the lions have apparently been exhibiting sexual behavior for the past week. The whole encounter happened in the lagoon area of the Kwando Concession in Botswana.

“Only one lioness was seen in the center of the concession where the male lions were and the lions showed no interest in the lioness, leading to the assumption that she may have been pregnant,” lawyer Nicole Cambré said, who took the photos.

Related: 8 Things You Should Never Do During Bum Fun

Cambré told Daily Mail, “It is the first time I have seen homosexual behavior in lions, but when reading about it upon my return, it is not that uncommon. With the light just around sunset, it gave some spectacular images.”

Fun Fact: Biologists have recorded same-sex sexual activity in more than 450 species, including flamingos, bison, beetles and warthogs. Some claim it to be up to 1,500 species.

Zoologist Petter Bockman chimed in, reports Daily Mail: “‘Gay’ is a human word. Sexuality is not just about making babies, it is also about making the flock work. For some animals, homosexuality is normal flock behavior.” We are gay, hear us ROAR! For more photos of the lions, click here.